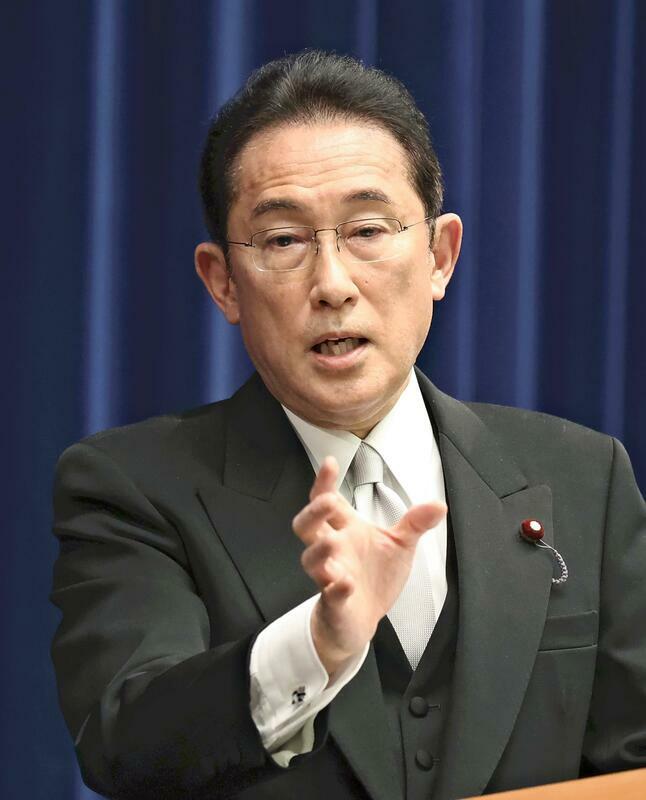 New Prime Minister Fumio Kishida said his government would draw up large-scale measures to revive the pandemic-battered Japanese economy, at his first press conference following the inauguration of his Cabinet on Monday.

"The battle against the coronavirus is still going on," Kishida told reporters. "We will take all possible measures against the virus, which is the top priority."

Kishida also said the government would enhance its income redistribution policy for the creation of a "new capitalism." As an immediate measure, the prime minister said the government "will consider providing cash relief for those who are suffering financially due to the pandemic" and that it would start discussing the matter with the ruling parties.

Kishida further told the press conference that he would dissolve the House of Representatives at the end of the extraordinary Diet session on Oct. 14 and hold a lower house election Oct. 31, with official campaigning for the general election to kick off on Oct. 19.

Initially the schedule was for official campaigning to start Oct. 26, with voting and ballot counting on Nov. 7.

Asked why the election was being moved forward, Kishida said: "We want to quickly implement drastic measures to control COVID-19 and boost the economy. To that end, I want [the public] to judge if Kishida can be trusted enough to take up the job, and steer the nation with the trust of the people."

He also said the changed schedule was aimed at shortening the political vacuum as much as possible.

"My goal is to realize a new capitalism," Kishida said. "The concept is for a virtuous cycle of growth and distribution [of wealth] and the development of a new post-pandemic society."

By revising Abenomics, the Kishida government is seeking to increase the middle-class population and stimulate consumption and corporate investment. The government will also discuss the post-pandemic economy and society.

Specifically, it plans to increase support for education and housing costs for families with small children, raise the incomes of nurses, care workers and childcare workers, and heighten surveillance of the "bullying" of subcontractors, in which large companies use their strong position to impose burdens on their suppliers.

Kishida has demonstrated a willingness to raise the financial income tax on capital gains and dividends in a bid to rectify disparities in income and assets among individuals. The new government will give weight to the distribution of wealth and narrow the gap between the rich and the poor, between large enterprises and small and mid-sized companies, and between urban and rural areas.

Kishida's ambitions for the distribution of wealth stem from his awareness that trickle-down economics -- a theory that argues benefits for major corporations and the wealthy will "trickle down" to small and midsize companies and low-income earners -- did not yield significant results under Abenomics.

Monetary easing and flexible fiscal stimulus helped corporate earnings recover, leading to a rise in share values and an increase in employment. Since the launch of the second Abe Cabinet in December 2012, Japan's real gross domestic product has grown from (an annualized rate of) about 515 trillion yen in the October-December quarter of 2012 to about 558 trillion yen in the pre-pandemic July-September quarter of 2019.

Wages, however, have stagnated. The Abe administration launched such policies as "the promotion of dynamic engagement of all citizens" and "work style reform." Wage increases have exceeded 2% for seven straight years since 2014, when the government took the initiative to prod companies to increase pay in so-called government-led "shunto" spring labor-management negotiations. However, real wages -- with price fluctuations added -- were lower in many years than in the previous year.

Distribution of wealth requires capital. According to the Cabinet Office, the potential growth rate, which indicates the strength of Japan's economy, remains below 1%.

Like previous prime ministers, Kishida has proposed a growth strategy including such elements as the establishment of a 10 trillion yen university fund; research and development of semiconductors and artificial intelligence; development of domestic vaccines and pharmaceuticals; and strengthened production systems.

His strategy, which also includes the promotion of digitization, follows the same direction as those of Abe and Yoshihide Suga.

But Kishida needs to take further steps to make it grow.