The future of fashion is comfort, not whatever they’re wearing in Dune

It’s that time of year when the fashion houses, not content with already showing two huge collections per year (Spring/Summer and Autumn/Winter), decide to fly lucky editors, influencers, ‘it’ people and customers to lavish locations in far-flung and Instagramable destinations, to show off their cruise or resort collections.

Louis Vuitton held a show in San Diego this month, in the vast, brutalist Salk Institute. The clothes were futuristic in the extreme, a mix of modernist metallics, and dystopian draping, a sort of Dune sci-fi vibe, which, while charmingly hopeful, and terribly artistic, is not really where the world is at.

Yes, we have drones, self-driving cars and all the knowledge in the world in our handheld devices, but when it comes to fashion, people haven’t quite made the jump into the futuristic outfits that all those science fiction films from Metropolis onwards promised us.

While we thought we might be dressing in crazy silver hoop skirts like Judy Jetson, we actually all look like we are Lost in Space, most specifically Dr Smith in his skivvies and stretch pants.

The future is now and it’s not made of all that complicated scrap metal asymmetry. It’s leisurewear. It is seemingly just too hard to move on from lockdown-comfy track wear, elastic waists and cosy hoodies. Australians are quite frankly refusing to.

My French husband works at a very upmarket Sydney dining establishment and comes home astonished that the clientele is all in activewear, at dinner.

He is constantly perplexed by the Australian dress sense. He once told our sons not to bother to go to any nightclubs on their trip to Paris because they dress so badly. They’d be refused entry and to be honest, he wasn’t wrong.

A bit too casual

We love casual here, that’s for sure.

The influencers might throw a camel cashmere coat over the top and add a Bottega Veneta handbag and some Botox, but trackies, leggings and hoodies are defining 2022.

I am currently writing this piece in an airport lounge, having just come off a flight from Sydney to Singapore, and pretty much every person understandably was in a tracksuit, including me.

Mine was a set from Jac + Jack, an oxblood T-shirt with matching elastic waist pants which I loved in the store. However, I am wearing them with a long cardigan, sneakers and a face mask, and I suspect I may be having a bit of a Golden Girls moment.

Every passenger, from the pointy end of the plane down to my dubious economy seat in the exit row was clad in stretch. At one point, a guy in a matchy-matchy Adidas tracksuit decided to break out into a full and very serious yoga routine in my legroom area, mid-flight.

Beside me were three tiny children in varying, very stylish onesies, which were probably the most fashionable looks on the plane, in quilted green and multicoloured velvet stripes.

I think we are all going to be opting for onesies in the near future rather than the weird Louis Vuitton hellscape clothes. Maybe one in silver? 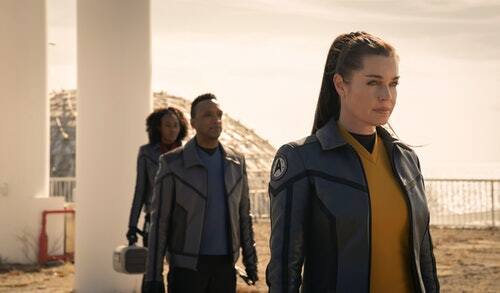 Inverse
One subscription that gives you access to news from hundreds of sites
Retro minis and bare baby bumps: The best-dressed stars at the 75th Cannes Film Festival

The Independent UK
Retro minis and bare baby bumps: The best-dressed stars from week one of the 75th Cannes Film Festival