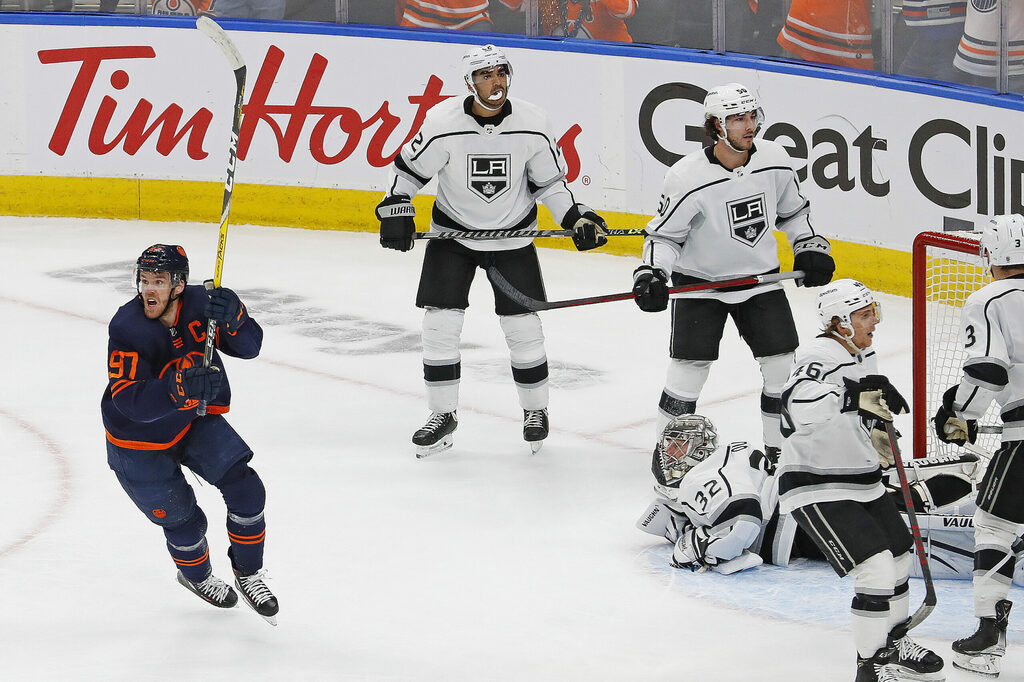 Connor McDavid’s ridiculous goal at the end of the Oilers’ Game 7 win had NHL fans in awe
What. A. Goal.

USA Today Sports Media Group
Panthers pull off third straight comeback to win first playoff series since 1996
WASHINGTON — Carter Verhaeghe wheeled his arm into a fist pump and, suddenly, two and a half decades of frustration…

Miami Herald
For Panthers, ‘a lot of guys wanted to play’ Lightning. And a ‘hard decision’ on Duclair
The Florida Panthers were not openly rooting for anyone Saturday when the Tampa Bay Lightning took down the Toronto Maple…

EDMONTON, Canada — By the end of a wildly back-and-forth Stanley Cup playoff series between the Los Angeles Kings and the Edmonton Oilers there were no surprises in the decisive game of their first-round matchup Saturday night at Rogers Place in buzzing downtown Edmonton, just superstar efforts.

“You keep seeing the same team every other night, it’s almost like you know what they eat for breakfast,” said Oilers coach Jay Woodcroft, who was the video coach with then-assistant coach Todd McLellan in Detroit and was McLellan’s assistant in San Jose and Edmonton before McLellan found his way to Los Angeles.

Alas, the Kings ended up being toast, though the difference proved to be remarkably narrow.

Edmonton defenseman Cody Ceci capped a long stretch of possession in the Kings’ zone by scoring from the right circle at 13:15 of the second period, set up by Connor McDavid and Leon Draisaitl, and McDavid provided an insurance goal with a slicing backhand with less than four minutes left in the third period as the Oilers earned a 2-0 victory and a ticket to the second round.

“Right now it’s very frustrating,” Kings captain Anze Kopitar said. “The series was obviously hard fought. We gave it all. We should be proud of that.

“It’s extremely frustrating because we came in here believing we could get it done.”

The Oilers will face the winner of the Calgary-Dallas series, which will end with a Game 7 on Sunday. Kings goaltender Jonathan Quick stopped 39 shots in an often spectacular performance against the Oilers’ furious pushes in the second and third periods. The Kings still have not won a playoff series since they won the Stanley Cup in 2014 for the second time in three seasons, but their long rebuilding process took a leap forward with their performance against the heavily favored Oilers.

The game was the NHL finale for Kings forward Dustin Brown, who announced he would retire at season’s end.

“I’m going to miss him a lot,” Kopitar said.

At the end, teams that had fought and pounded each other met at center ice in the traditional handshake line, always a heartening sight.

McLellan said the emotions spilled over into the Kings’ locker room.

“There are a lot of water-filled eyes in there,” he said. “We were in it to win it. It wasn’t just for the experience.”

The Oilers have been building toward a championship since they chose generational star McDavid in 2015, the fourth time in six years they’d landed the No. 1 overall draft pick. But something had always held them back from being competitive, let alone being great.

Sometimes it was weak goaltending. Other times, a leaky defense. Most often it was a thin supporting cast around four-time NHL scoring champion McDavid and 2020 scoring champion Draisaitl, their No. 2 center. Coaches came and went and little changed. Pressure mounted. They know champions in Edmonton — they watched the Wayne Gretzky-led dynasty of the 1980s — and they weren’t getting championship-caliber hockey anymore.

This season’s team was flailing until Woodcroft replaced Dave Tippett on Feb. 20. With a sounder structure the Oilers finished well, getting strong goaltending from Mike Smith and otherworldly exploits from McDavid as they sprinted five points ahead of the Kings and landed second in the Pacific Division.

In the playoffs, they outscored the Kings 25-17 in splitting the first six games and also got a shutout from Smith. McDavid was brilliant in Game 6 at Los Angeles on Thursday, extending the Oilers’ season with a goal and three points in a staggering 24 minutes and two seconds of ice time. On Saturday, they regained cornerstone defenseman Darnell Nurse, who had served a one-game suspension Thursday. Their key worry was how much they’d get from Draisaitl, who was battling an apparent ankle injury.

A few days ago, McLellan noted from his unique perspective of having coached in Edmonton and in Los Angeles that the still-rebuilding Kings faced less pressure than the Oilers do. “Our pressure is what we put on ourselves. Their pressure is, it’s enormous throughout Oil Country and Canada and the superstars and the media pressure and where they’ve been and what they want to do,” he said.

There’s a lot of truth to that. The Kings get swallowed up in a city blessed with so many professional and college teams, and they’re still recovering from their post-Cup decline. The Oilers are an obsession in a hockey-mad city in a hockey-fixated country that hasn’t had the Cup come “home” since the Montreal Canadiens defeated the Kings in 1993. (Is it too soon to mention Marty McSorley’s illegal stick?).

The Kings had a chance to end the series Thursday at Crypto.com Arena, erasing a two-goal deficit in the third period before losing 4-2. They hoped their experience in Game 7 showdowns would help Saturday: Quick, Kopitar and Brown (as well as injured defenseman Drew Doughty) were 4-0 in Game 7 situations as Kings. Phillip Danault had won the only Game 7 he played with the Montreal Canadiens, and defenseman Olli Maatta was 3-1. McLellan is 1-4 in such situations.

In many ways, the Kings were in a win-win position Saturday. They created optimism for their fans and for themselves by reaching the playoffs, and their young players gained priceless experience for future postseason runs that now seem entirely possible.

It was difficult to lose after missing a chance to close out the series in Game 6 but, as the 2012 and 2014 Kings teams found out, the path to a Cup includes being tested by adversity and pressure.

“I think the experience we got this year will bring us a long way,” Danault said.

The current Kings learned a lot more during this series than what the Oilers like for breakfast. They learned the power of an inner belief that, with some careful moves over the summer, can accelerate their return toward Cup contention.

Connor McDavid’s ridiculous goal at the end of the Oilers’ Game 7 win had NHL fans in awe
What. A. Goal.

USA Today Sports Media Group
Panthers pull off third straight comeback to win first playoff series since 1996
WASHINGTON — Carter Verhaeghe wheeled his arm into a fist pump and, suddenly, two and a half decades of frustration…

Miami Herald
For Panthers, ‘a lot of guys wanted to play’ Lightning. And a ‘hard decision’ on Duclair
The Florida Panthers were not openly rooting for anyone Saturday when the Tampa Bay Lightning took down the Toronto Maple…