Kids up for jabs as COVID case numbers remain high 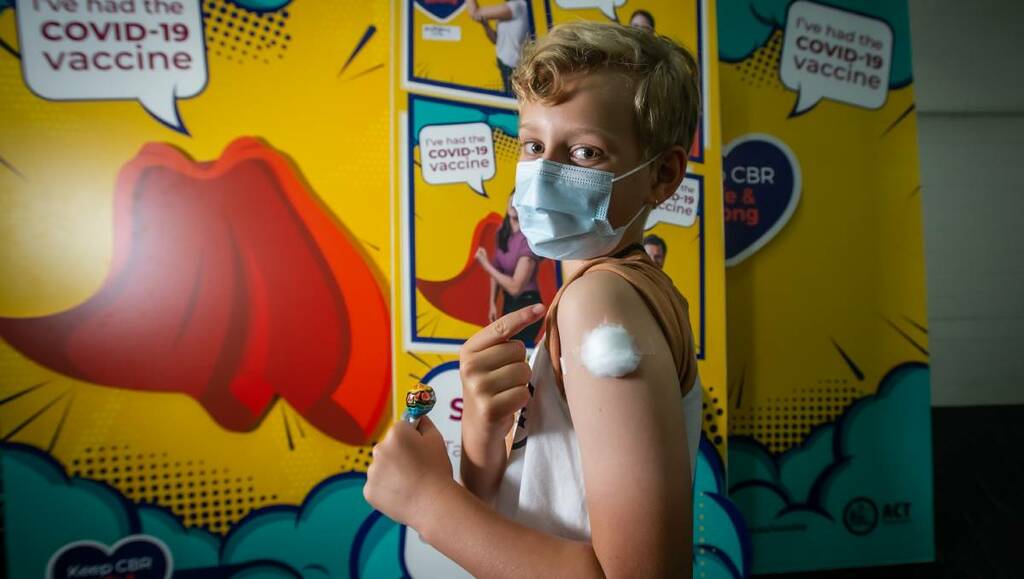 Around 1000 children a day will be able to receive their Pfizer COVID-19 vaccines at the AIS mass hub, as the territory races to get its youngest eligible cohort immunised.

About 400 five to 11 year olds had been vaccinated at the mass clinic by lunchtime on the first day of appointments, with changes being implemented to make the process more kid-friendly.

A window of five minutes for administering jabs had been increased to 10, while cartoon stickers adorned the lines of plastic chairs occupied by those waiting.

Ten-year-old June Tattam was one of the first to get her jab on Monday. Asked how she was feeling ahead of the shot, June summed it up: "I'm a bit nervous, but afterwards I get a lollipop."

"It's actually a bit of a relief to be here," her mother, Emma Nikolic said.

"June is the last in our family to get vaccinated. It's a big relief to know that she's on the way to being fully vaccinated."

Ms Nikolic said her family talked a lot about vaccination at home. "That it's not just for us, but it's for our whole community, and it's for those people who are more vulnerable."

The ACT on Monday reported 938 new cases of COVID-19, with 25 people in hospital with COVID, four in intensive care, and three ventilated.

Meanwhile booster coverage for those aged 18 and over had risen to 22.5 per cent.

Clinical nurse consultant Brendan Higgins said five to 11 year olds becoming eligible would act as a reminder for parents to book in for their boosters. That and reduced waiting periods after second doses would help to drive up the ACT's vaccination coverage, he said.

"Parents can show their kids that it's OK to get the needle and that they shouldn't be scared, and they're doing a really good job for the community," Mr Higgins said.

Mr Higgins said good communication is key for parents bringing their kids in for vaccinations.

"So explaining what's actually going on and why they're doing it, and how they're getting it," he said.

"And that they shouldn't be fearful and they're actually even helping the community and also protecting themselves and their grandparents and everyone around [them]."

Staffing shortages due to rising COVID infections were hitting the vaccination hub, Mr Higgins said, but "we've got a really good team for coming together, working long hours and doing a really good job".

GPs and pharmacies will also start to rollout vaccinations to the territory's youngest eligible cohort, but say the demand is intense. Ainslie Family Practice manager Warren Frost said the site would start administering vaccines to five to 11 year olds from January 14, but appointments were booked up until April.

"On top of our normal day to day routine treatment, and management of chronic disease clients, we just simply don't have enough resource for administration," Mr Frost said. He questioned why the government hadn't considered administering doses to kids at school in order to relieve strain on private and public surgeries and hospitals.