Kerala’s stringers lived a hard life. The pandemic made it worse 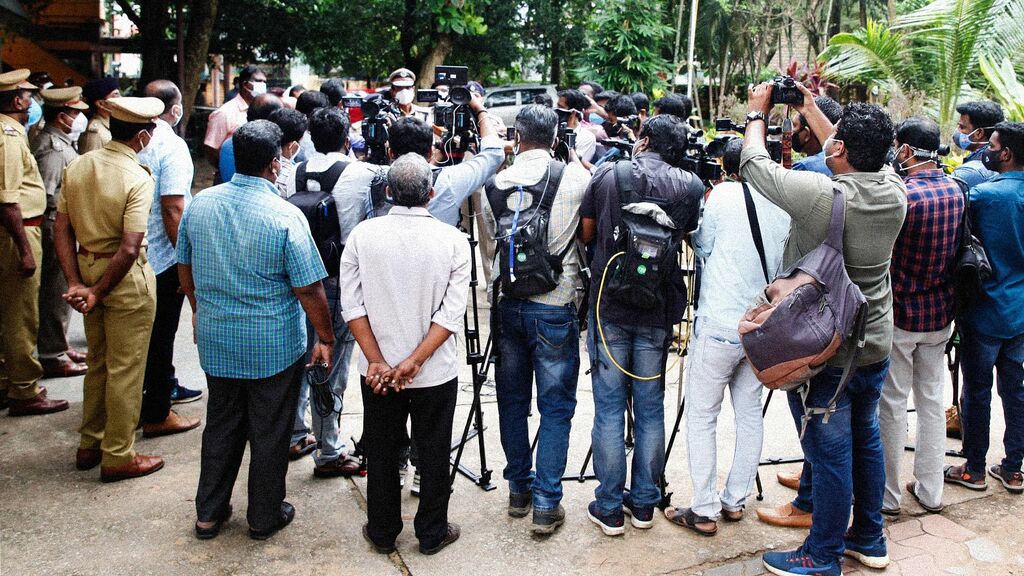 “I tested positive twice and was quarantined for almost 50 days in the past year,” said a stringer working for a Malayalam television channel headquartered in Kerala’s Idukki. “Since I report on the pandemic, my work requires me to be in places where infection levels are high. Far from getting support from my organisation or government, my payments were delayed and my remuneration cut.”

Stringers in Kerala tell similar stories, which they share with stringers across India. “Stringer” is a catch-all word for journalists employed on a semi-regular basis to report from regions where media houses often do not have bureaux or full-time correspondents.

Stringers in India get little or no support from the media organisations they work for as well as low and precarious pay. The pandemic has only exacerbated their problems.

“From day one of the pandemic, I have been reporting from the field, regularly getting news from hospitals, police stations, accident spots, rallies, protests, and other mass gatherings,” said a stringer in Kottayam who works for a national daily. “In the initial days of the pandemic, I was really gripped by fear for my safety and that of my family.”

The stringer is the sole earning member of his family. “I was the only one who had to go out of the house during the lockdown,” he said. “Despite all our precautions, my family members and I were infected by the virus. Now I am getting used to these abnormal circumstances.”

The fear is real. Stringers in Kerala said they have seen colleagues lose their lives during the pandemic or contract Covid. Many have lost some or all of their income from journalism and are gripped by everyday anxiety about losing their jobs altogether.

Stringers have become critical for news gathering in this pandemic. Most of them have been working non-stop during the lockdown – and Kerala is still under partial lockdown – given the surge in demand for information. It’s taken a heavy toll.

According to the Kerala Journalists Union, or KJU, at least three stringers have died of Covid in the past year – Mathayi Thomas, 40, who worked for Chandrika Daily in Idukki’s Adimaly; Kadalayi Salim Moulavi, 46, of Siraj Daily in Thrissur’s Irinjalakuda; and MO Shibu, 46, who reported for the newspaper Deshabhimani in Thiruvanthapuram’s Chirayinkeezhu.

“We have not been given any aid by the government yet,” said Mathayi Thomas’s wife Aswathy, who is struggling to look after her two children and elderly parents. “It is very difficult to survive.”

The KJU also said 30 percent of Kerala’s stringers have tested positive for Covid thus far. But due to the invisibilisation of this workforce, there is no governmental or institutional support for the dead or ailing among them, or their families.

The KJU on May 18 urged chief minister Pinarayi Vijayan to list stringers as frontline workers and provide compensation to the families of those stringers who have died of Covid.

“But the government has not responded until now,” said KC Smijan, the state general secretary of the union. “Recognising stringers as frontline workers would ease some of the challenges they grapple with on a daily basis, such as receiving priority in terms of vaccination. While some stringers did manage to get Covid vaccination, the majority haven’t. Several have lost family members to the pandemic, which wrought unprecedented havoc on their lives.”

In July, culture minister Saji Cheriyan had announced that stringers would be brought under the Kerala Cultural Activists Welfare Fund Board. If he follows through, it will be a huge relief for the distressed local stringers.

Most stringers in Kerala are paid on a volumetric basis: those working for newspapers are paid per column length of their published stories, those reporting for TV channels are paid based on the number of aired stories.

Unpublished or unbroadcast work isn’t considered for payment, no matter how much time and effort the stringer takes to do it, said a stringer based in Kanjirapally, Kottayam.

This means a stringer can earn between Rs 6,000 to Rs 15,000 a month. Some media houses, though, give their stringers fixed salaries, ranging between Rs 6,000 and Rs 10,000. These stringers, however, can’t claim credit for their published works.

There are often delays in payment. Several stringers said they have not even been paid for the past eight months. Since stringers aren’t formal employees, their right to claim a regular income stands jeopardised. And organisations often exploit this loophole.

A stringer for a Malayalam news channel said he faced the additional challenge of contracting Covid while reporting on the pandemic. “I was not able to work for almost 20 days,” the stringer said. “Since I am paid only for my stories that are broadcast, I only managed to do five of them during that month. This blew a big hole in my finances and I literally struggled to cope.”

A major source of income for Kerala’s stringers is advertising revenue. Media houses usually task stringers with selling advertising space and increasing their subscriptions, a stringer in Palakkad told Newslaundry. “We need to meet these expectations within a deadline,” the stringer said.

In return, stringers are paid 10-20 percent of the advertising revenue they’ve generated.

The pandemic caused a sharp fall in this income, with a newspaper stringer in Kollam pointing out that Covid had “sharp repercussions”.

“I used to earn Rs 8,000-15,000 per month in ad revenue,” he said. “Now, these earnings have fallen to Rs 1,000-2,000. Local clients have stopped advertising in newspapers given that shops and restaurants have been closed because of the lockdown. I’m now getting only a fourth of what I once received, and sometimes not even that. This makes it very difficult for me to take care of my family.”

A stringer with a top Malayalam paper noted that Covid hurt advertising and subscriptions “so grievously” that stringers now have to “run around day and night to try and salvage the situation”.

A journalist in Nemmara, Palakkad, argued that the pandemic is the first time in his 15 years in the profession that “the media is facing a crisis of such magnitude”.

“I usually don’t go out on the field during the pandemic,” said a stringer in Malappuram on adapting to new reporting practices in the past year and a half. “Mostly, I use social media and phone to collect the news. Even if I want to go on the field, due to lockdown constraints, it is very difficult for me to reach faraway rural places. Even though I am aware of the pitfalls of not going to the field, I have no other choice.”

Stringers also face a crisis of credibility, since the media houses they work for don’t give them press cards or other forms of ID.

“Since we are not provided with the company’s identity cards, we are vulnerable to routine police scrutiny and penal action,” said a stringer attached to a news channel. “Not having proper ID cards makes it very difficult for us to enter hospitals and government offices. Some media organisations provided temporary ID cards to their stringers during the pandemic but most of us lacked this basic provision. We had to use the KJU identity card for emergency reporting purposes.”

The pressure to survive and keep their kitchen fires burning sometimes forces stringers to make money on the side through subsidiary, often menial, jobs. Some even resort to unethical means, like blackmail and extortion.

Media observers point out that this is why a sustained effort must be made to ensure adequacy of payment and security of work for this section of journalists. Since many local journalists learn the ropes of reporting on the job, they’d also benefit from training and refresher courses to allow them to advance in their professions and introduce them to changes in the industry, such as the use of social media to enhance their work and visibility.

Jagadheesh Babu, chief editor of Executive Daily and a social activist who has been working for the rights of journalists for over 15 years, summed up the multi-layered challenges facing stringers today.

“Even though stringers are the backbone of the media industry, they are treated like slaves of the media industry,” he said. “They are left on their own, without proper appointment orders, identity cards, experience certificates. Not only are they deprived of the privileges of being employees of their organisations, their work is often sidelined or unacknowledged. Even the mandatory credit line is often missing.”

Kerala has two prominent journalist unions. The Kerala Union of Working Journalists gives membership only to accredited journalists – 5,000 as of today, by its own estimate – working as editors, reporters, proofreaders, video producers. The Kerala Journalists Union works mainly with local reporters, or stringers, of whom there are 6,000 to 7,000 in the state.

“KJU has been asking for a special welfare fund for local correspondents, and we have been trying to make medical insurance and pension benefits available to them,” said Benny Vargheese, district president of the KJU in Palakkad. “The Left Democratic Front, which is in power now, had included a separate welfare fund for local correspondents in their election manifestos in the last two elections. But the fund hasn’t been set up yet.”

The KJU also reached out to stringers during the pandemic to provide support. “During the pandemic, various regional units distributed free food kits, masks, sanitiser and other safety gear to the most vulnerable among local correspondents,” said Smijan. “Several of them face financial problems and find it difficult to support their families. However, providing financial assistance to them is not possible as the KJU lacks the necessary financial backup.”

The names of some stringers are being withheld to protect their identities.