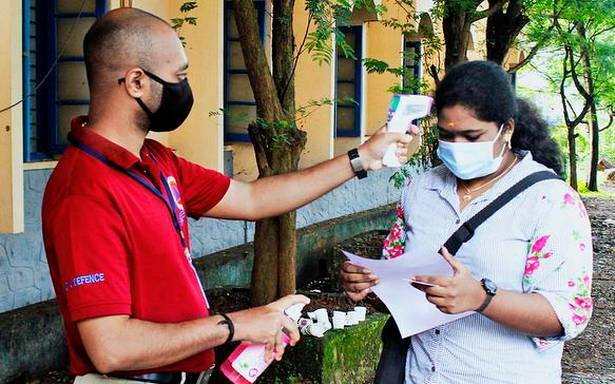 Boys continued to grab a chunk of the engineering ranks, securing seven of the top 10 and 78 of the top 100 positions in the Kerala Engineering, Architecture, and Medical (KEAM) entrance examinations 2021.

The KEAM 2021 results were declared by Minister for Higher Education R. Bindu on Thursday.

Faiz Hashim of Wadakkanchery in Thrissur bagged the first rank in the engineering entrance examination, earning a score of 575.95. Harishankar M. of Karamala, Kottayam, grabbed the second spot with a score of 572.22. The third position went to Nayan Kishore Nair of Mundakkal West, Kollam.

Aarushi Prashanth of Peroorkada, Thiruvananthapuram, was the topper among girls, bagging the seventh rank overall with a score of 569.98. She was followed by Priyanka Paleri of Nadakkavu, Kozhikode, and Anuradha Asokan Nair, a candidate from abroad.

Of those who figured in the first 5,000 ranks, maximum were from the CBSE stream – 2,602. As many as 2,112 had completed their Plus Two from the Kerala State syllabus. While 242 were from ISC stream, 44 were from others.

Sixty-four of the first 100 candidates were making their first appearance, while for 36 it was the second.

Ernakulam had the highest number of candidates in the top 100 – 21. Thiruvananthapuram with 17, and Kozhikode with 11 followed.

Ernakulam also had 174 candidates in the first 1,000 ranks, followed by Thiruvananthapuram with 152, and Malappuram with 115.

The architecture rank list, based on the National Aptitude Test in Architecture (NATA) and marks in the qualifying examination, and pharmacy rank lists were also released as part of the KEAM results.

Thejus Joseph of Kottiyoor, Kannur, bagged the first rank in the architecture rank list with a score of 335.5. Amreen of Kallayi, Kozhikode; and Aathinadh Chandra O. of Valappad, Thrissur, grabbed the second and third positions, respectively.

Faris Abdul Nassar Kallayil of Amala Nagar, Thrissur, topped the pharmacy rank list with a score of 465.12. Thejaswi Vinod of Pariyaram, Kannur, and Akshara Anand of Kavumbhagom, Pathanamthitta, were in the second and third spots, respectively.

Option registration for the courses has already begun. The last date for registering options is October 9. The time for completing the two allotments and commencing classes as per All India Council for Technical Education schedule is October 25.

The rank details will be available on the website of the Commissioner for Entrance Examinations https://cee.kerala.gov.in/main.php