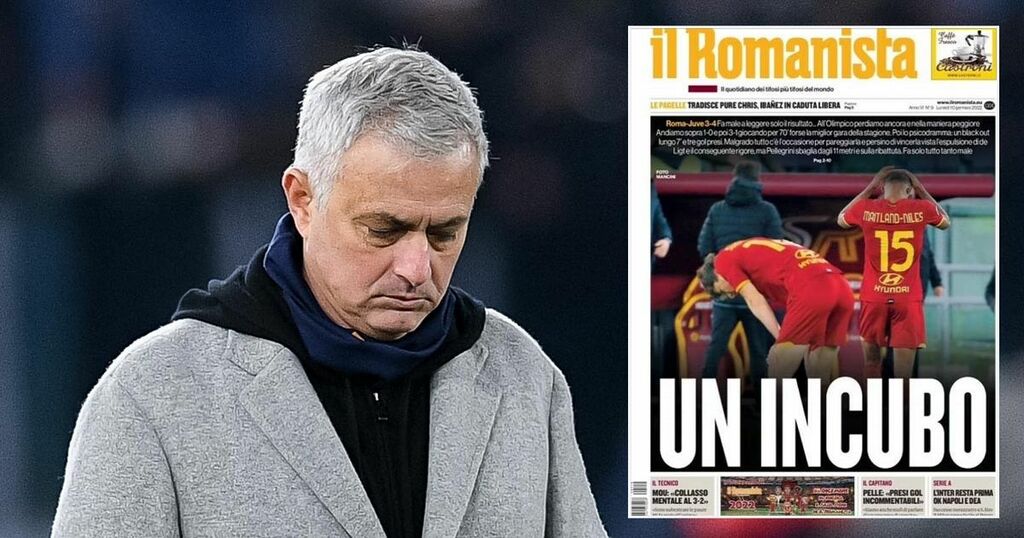 Sunday was another low point in Jose Mourinho’s troubled six months in charge of Roma as his side conceded three goals in seven minutes to capitulate against Juventus.

It was not the worst result of the Portuguese’s tenure in Rome – that remains the 6-1 humiliation in the Europa Conference League against Norwegian club Bodo/Glimt – but it might just be the most painful.

Having meekly gone down to a 3-1 loss at Milan just three days earlier, Mourinho’s side needed a response at home to Juventus whom they would have leapfrogged in the standings with a win.

Roma dominated the opening half but Tammy Abraham’s opener was cancelled out by Paulo Dybala, before goals from Henrikh Mkhitaryan and Lorenzo Pellegrini put Mourinho’s men in control, or so it seemed.

Mourinho’s reputation during the majority of his managerial career has been built on his side’s defensive organisation and in-game management, but those facets have seemingly long gone.

HAVE YOUR SAY! Will Jose Mourinho be able to revive his career at Roma? Let us know what you think in the comments section below

Despite this stunning capitulation, Roma still spurned a huge opportunity when Juve defender Matthijs de Ligt was sent-off as Pellegrini missed a penalty and Mourinho’s side failed to make their one-man advantage count in the final 10 minutes.

Roma have now lost six of their last 11 Serie A matches and their hopes of a top four finish are now fading fast – nine points off the Champions League places despite having played a game more.

Unsurprisingly, the Italian press are becoming increasingly critical of Mourinho’s side continued rut of poor results and below-par performances.

Gazzetta dello Sport focused on the result’s 'joy and pain' for Juve – who secured a dramatic three points but their star player Federico Chiesa suffered ligament damage that will rule him out for the rest of the campaign.

That outlet rated Mourinho’s performance on the day at a measly 5/10 and claimed that he ‘cannot correct Roma’s personality problems’.

Corriere dello Sport were even harsher, claiming that Mourinho ‘cannot find the solutions’ for his side and rated his performance at 4.5/10.

Most damning of all was Roman newspaper Il Romanisti, who labelled Sunday night’s match a “nightmare” and describing how the outcome of the game “hurts so much”.

It was not just Mourinho who faced the wrath of the press but loan signing Ainsley Maitland-Niles from Arsenal, whose performance was ranked between 4.5-5/10 by the media outlets.

After a significant transfer outlay this summer, Roma’s results are falling well short of their expectations – with anything less than a challenge for a Champions League placing likely to be viewed as a failure.

After difficult tenures at Manchester United and Tottenham, Mourinho is yet to find relief back in Italy.