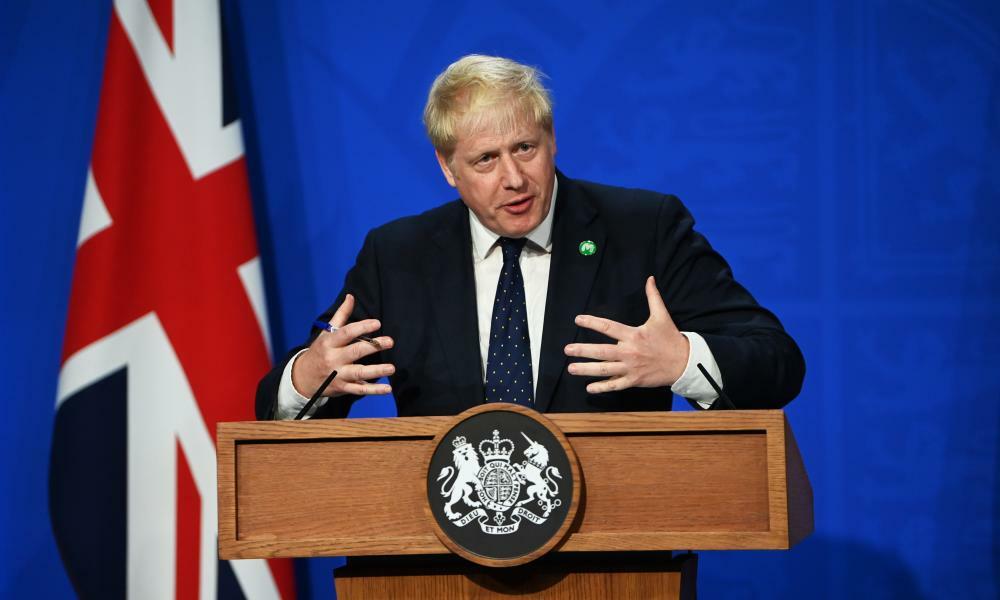 What do you do when your sworn enemy insists on wearing your clothes? The question looms large after a week when Boris Johnson once again dressed himself up in deepest red, introducing a new tax that aims to raise £12bn a year to tackle the NHS backlog and fix social care, the sort of high-tax, high-spend move that was once anathema to the Conservative party and the exclusive preserve of Labour.

But it’s a question Johnson has been posing for his opponents for much longer. In the 2019 election, he won seats that had historically voted Labour with promises of “levelling up” that were premised on a big, active state, ditching Margaret Thatcher’s blue twinset for a slash of Labour red. Indeed, ideological cross-dressing has been a thread through Johnson’s career. He was twice elected mayor in Labour-dominated London thanks in part to a range of red accessories, including support for an amnesty for undocumented migrants, all swiftly discarded when they fell out of fashion.

He’s not the only rightwing politician at it. Plenty of populists around the world are adopting the same formula, moving right on culture, including race, immigration and nationalism, and left on economics. But it’s proved especially fruitful for Johnson and is central to his electoral strategy. Remember, he wants the election of 2024 (or 2023) to be framed as a request for a second Johnson term, not a fifth Conservative one. That’s easier to pull off if he can claim to have nothing in common with the small-state austerity of the Cameron-Osborne years.

It’s discombobulating for Labour, who this week found themselves voting against a tax rise for the NHS, even though a tax rise for the NHS is venerated by Blairites and Corbynites alike as one of the last Labour government’s signature achievements. Tellingly, when I spoke this week to a range of senior Labour figures, current and former, they had sharply different answers to the question that now confronts them: how do you beat a Tory bent on stealing Labour’s best tunes?

Start with what not to do. There’s no point attacking Johnson for breaking his promises, even when they were in his manifesto. For one thing, this is Boris Johnson we’re talking about: breaking his word is part of his brand. No one expects any better. For another, when Johnson says that a “pandemic was in no one’s manifesto”, voters can’t help but nod. They understand that Covid-19 has upended everything.

Nor is there much mileage in suggesting Johnson is a fake, that he’s only posing as a tax-and-spend social democrat. Ideological consistency is a quality sought by other ideologues. If anything, lots of voters seem to like Johnson’s lack of doctrinal purity: again, it’s part of his persona, suggesting a loose pragmatism that many find appealing. Besides, the claim of fakery won’t wash. The Tories came unstuck with their 1997 Demon Eyes campaign, suggesting Tony Blair was a red-clawed socialist under that smooth middle England exterior, because voters simply didn’t believe that about Blair. For the same reason, Labour should avoid claiming that the true Johnson is a Thatcherite state-shrinker. As one former cabinet minister puts it: “It’s not great to be saying that the guys who just raised taxes want to cut them.”

Instead, it’s better to take Johnson on his own terms. A few licensed Labour outriders could run with that, welcoming the prime minister on to the red team, hailing Johnson as a TINO: a Tory in name only. “Spook his backbenches the same way Cameron spooked ours,” says one grizzled Labour operative. The Tory embrace of New Labour policies strengthened the left’s conviction that Blair was a closet Tory and undermined Labour morale. Look at the Telegraph denunciations of Johnson for sounding “the death knell for Conservatism” and “turning his party into Blue Labour” and you can see the potential.

I’m told that the Johnson announcement threw Labour’s high command into a “mini nervous breakdown” as they realised they had no social care policy of their own. “We were forced into a corner and had to attack,” says one shadow cabinet minister. But that seems to have turned out rather well, with Labour notching up a rare poll lead, in one survey at least.

The core thrusts of the attack are ones that could be replicated on multiple fronts, wherever Johnson seeks to put his tanks on Labour terrain. All right, Labour would say, the prime minister claims he wants the same outcome we want. But the way he’s going about it is neither effective nor fair. Competence and fairness are the Tories’ greatest weaknesses and, potentially, Keir Starmer’s greatest strengths.

This week’s move fitted that template perfectly, though it was shadow chancellor Rachel Reeves rather than Starmer who articulated it. The message is simple enough. Of course, Labour supports the principle of funding the NHS and care through taxation. But this specific tax rise won’t do the job, and it puts the burden on those carrying too much already.

In that response lies the shape of a strategy to confound Johnson’s attempt to make traditional Labour territory his own. The opposition can say that, for all his rosy talk of levelling up, Johnson always ends up levelling down, whether by jacking up taxes on working people, slashing universal credit or pushing up bills through the shortages and chaos caused by a Tory Brexit.

Labour can remind voters every day of the ways, big and small, in which the government has failed to deliver on its supposedly red goals – where’s the railway station Johnson promised for Blyth? – and it can offer multiple explanations for why this was a failure foretold, thanks to both Johnson’s party and his character. Johnson wants to steal Labour’s clothes. It’s Labour’s job to say he’s wearing them all wrong.