Multiple revelations were made throughout the hours-long inquiry, with Mr Barilaro saying he has endured "what can only be described as a personal hell" as a result of accepting the role.

Mr Barilaro said he understood why some members of the public might view his recruitment to the role as suspicious, but was adamant the process was independent.

He said he was "disappointed" the process hadn't been "as clean as it should have been", saying: "I'm the victim of that, not the perpetrator."

So what did we learn? Well, Mr Barilaro…

... said he wished he never applied for the job

In his opening remarks, Mr Barilaro rejected any suggestion he was seeking "special treatment" during the job's application process.

He described the past seven weeks since he relinquished the role as "unbearable", and later said he wished he had never applied for it.

"I will say this: if I knew what I know now, I wish I never had applied," Mr Barilaro said.

"If I knew what I know now, I wouldn't have walked into what was a shitshow.

"I'm going to use those terms, I'm sorry to say, because the trauma I've gone through over the past six to seven weeks has been significant."

... rejected suggestions the role was 'fast-tracked'

Mr Barilaro flatly rejected any suggestion he fast-tracked a cabinet submission about trade roles so he could apply for one.

The cabinet submission, which would have transformed trade roles into ministerial appointments, was proposed and passed in seven working days.

NSW Shadow Treasurer Daniel Mookhey, one of the members of the inquiry, argued the change was rushed through in September because he knew then-NSW premier Gladys Berejiklian would have to resign in October as a result of ongoing ICAC questioning for an unrelated matter.

"I will absolutely refute that disgusting slur and accusation," Mr Barilaro said.

"You're making me out to be corrupt.

But the inquiry did hear the former NSW Nationals leader had been interested in the job for some time. In fact, he...

... flagged his interest in the position with Perrottet last November

Mr Barilaro told the inquiry he flagged his interest in the role to Premier Dominic Perrottet on a phone call in November, after his resignation from cabinet, to which he claimed Mr Perrottet responded "great".

Mr Barilaro said he spoke to then-trade minister Stuart Ayres and texted Treasurer Matt Kean about the role too.

Under questioning from the Opposition, the former deputy premier said at no time in his brief discussions with Mr Perrottet, Mr Kean and Mr Ayres did anyone say it was improper for him to mention his interest in the role.

"No-one ever raised with me that this would be politically sensitive," Mr Barilaro said.

"At no point did anyone say it would create controversy."

This morning, Mr Kean said he did receive a text out of the blue from Mr Barliaro in December and encouraged him to go through the proper process.

"He indicated that he wanted to apply for this job, I encouraged him to do so as he obviously did," Mr Kean said.

"I didn't actually think John would go through with it but it was in December. I didn't give it a second thought, to be honest, until it's all come to light in recent times."

Under questioning from the inquiry, the former deputy premier also...

... said he didn't know someone else had been offered the job

Mr Barilaro was asked about a briefing note sent to his office stating a candidate for the job, Jenny West, had been selected for the role in August 2021.

He said he didn't recall seeing the note, but accepted it contained an electronic signature of his in accordance with a process in his office for when he was away.

Mr Barilaro said he had "no issue" with Ms West, who he described as a "strong professional".

"It's only from watching this hearing I've understood the events that had occurred behind closed doors that I wasn't aware of," Mr Barilaro said.

"I was a big fan of Jenny West … I had no issue with Jenny West.

"I remember understanding that Jenny West was a candidate. I wasn't told at all she was offered a job."

She says that offer was later revoked and she was told the job would be a "present" for someone.

"I didn't know that Jenny West was offered a contract … this inquiry has really opened that up," Mr Barilaro said.

We also learned that Mr Barilaro...

... withdrew from the recruitment process, then threw his hat back in the ring two days later

Mr Barilaro told the inquiry he withdrew his application for the US trade role on February 23, 2022.

He said he had been offered a job as executive director for the Coronation Group at the time.

But by February 25 he had reconsidered and put his hat back in the ring for the trade job.

"For my own professional growth, I thought why not go through the process?" he said.

"I was entitled to apply for the job … so why not continue?"

He says he didn't talk to any government colleagues around this time. 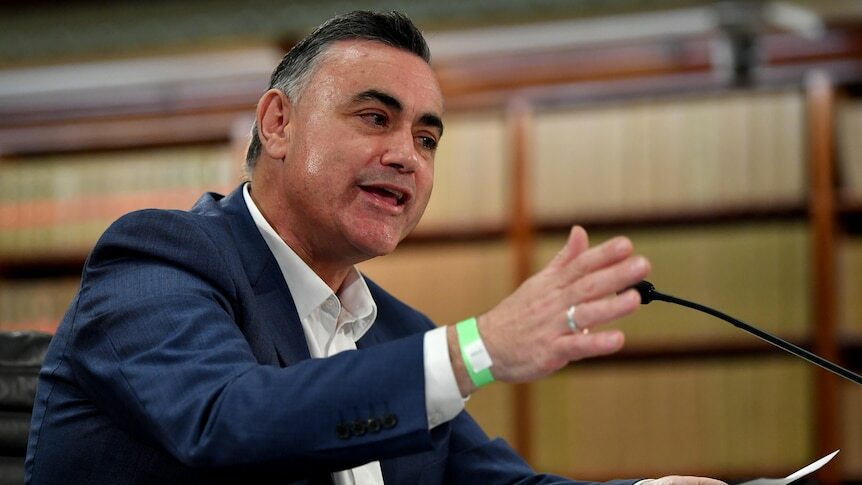 ABC News
From analysis to the latest developments in health, read the most diverse news in one place.
Sydney news: Former NSW deputy premier John Barilaro to face US trade role inquiry

MORNING BRIEFING: Former deputy premier John Barilaro will today appear before the inquiry created to investigate his appointment as NSW's…

Determining the circumstances that led to John Barilaro landing a cushy New York trade role has become "ridiculous", according to…

AAP
The Barilaro affair must go to ICAC. A timeline of the facts makes that clear

Crikey
One place to find news on any topic, from hundreds of sites.
Kean elected NSW deputy Liberal leader