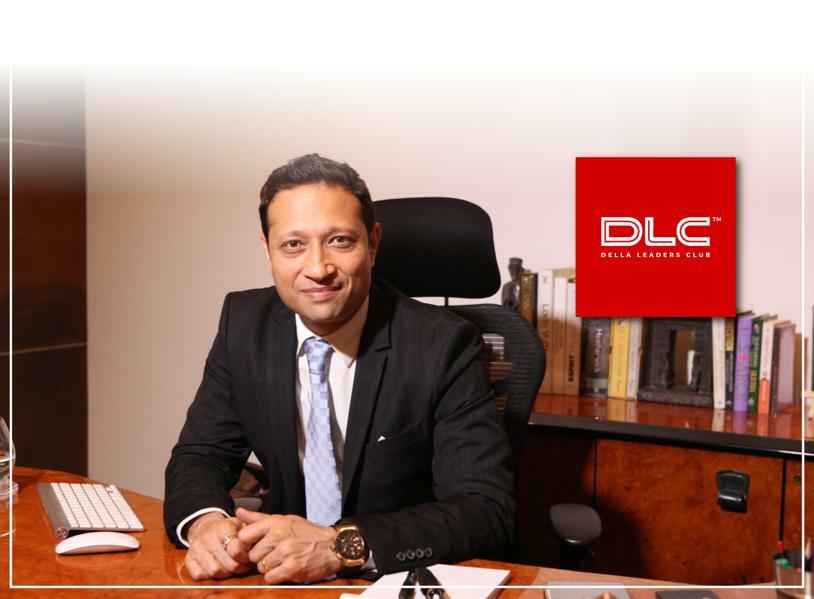 Jimmy Mistry has always led his incredibly successful business life by ensuring that his projects and deals have a higher purpose: to improve society for all and to make a significant dent in the world at large.

DLC is the world’s first business platform for a Global Community of entrepreneurs, professionals and leaders across 15 Chapter Cities.

But first, Mistry proved he had what it takes to create and lead others.

His mantra: "At Della, our commitment to Design Thinking is reflected at every level be it Person, Process or Product."

Inspired by JRD Tata, Mistry states, “Whatever businesses we are into must improve the lives of as many people as possible. No success or achievement in material terms is worthwhile unless and until it serves the needs of the Community and its Country and is achieved by fair and honest means.”

A pioneer, Mistry never let the discouraging scoffs of competition or recession get in the way of him successfully setting new standards in design, architecture, and development. Over the years, he designed for some of India’s corporate giants and forayed into real estate with Della Villas and then experiential hospitality with Della Resorts and Adventure Park.

The committed and restless Mistry knows that the best entrepreneurs change the way things are done in society. A sharp business acumen combined with a strong commitment to social betterment is what makes one businessperson better and more adept at the job.

Mistry never gave up interest in strengthening his community and won an election to serve as a Trustee for Bombay Parsi Panchayat, the 300-year-old charitable organization, for seven years.  Even though he wasn’t a politician, he made up for it with his passion to be able to do in return that which was done for him— a lesson he learned from his parents.

September 11, 2001 brought seismic changes in business and society. Following the tragic terror attacks, Mistry set up D.A.T.A (Della Adventure Training Academy) —as a tribute to every innocent life lost. This organization aims to inspire civilians to serve their country and provides them with the best counter terrorism and survival training available.

Mistry firmly believes that entrepreneurs aren’t truly successful until they don’t challenge the status quo towards betterment of society.

Which made him launch Della Leaders Club, based on the philosophy he aims to bring into practice—to truly be the catalyst to drive people from “A Life of Success to a Life of Significance.”

The Della Leaders Club is a highly curated technology-enabled Global platform. Guided by the experience of Mistry’s unique career, Della Leaders Club was developed from his desire to create a comprehensive support ecosystem for the modern leader.

Comprised of International chapters and members in 26 business and lifestyle domains, Della Leaders Club members are eager to contribute, share with others and give back to society.

Having designed for some of the World's most successful entrepreneurs, corporate professionals, celebrities and socialites during the last 25 years, Mistry realized that leaders are hungry for business knowledge and wish to stay ahead of the curve.

Many also wanted to contribute and help others, which mirrored Mistry’s life of Social Entrepreneurship. The DLC Global Community is a conglomerate of leaders who want to share their experiences, knowledge, and domain expertise.

Della Leaders Club has over 2,200 Global Honorary Committee Members across 15 cities globally. Cities include New York, London, Hong Kong, Singapore, Bangkok and nine cities in India during Phase 1. With a registered company in Delaware and office in New York, DLC aims to expand operations to seven more chapter cities in the U.S., 120 Hon. Committee Members, 7-8 full time staff and a small studio in each chapter city. The expansion plan includes 10 additional chapter cities each in 2022 & 2023.

The DLC concept has already gone viral. DLC has been able to successfully onboard men and women of prominence like IVY league alumni, unicorn start up founders, YPO members, Forbes listers, Grammy Award Winners, top Government Attorneys and UN members. The organization lives by an ethos of diversity and equality that encompasses all nationalities, faiths, genders and ages and areas tied together by the spirit of entrepreneurship.

Mistry has already proven that he is an entrepreneur to watch closely. All eyes now turn to the Della Leaders Club to see how much social change and improvement can be put into action.