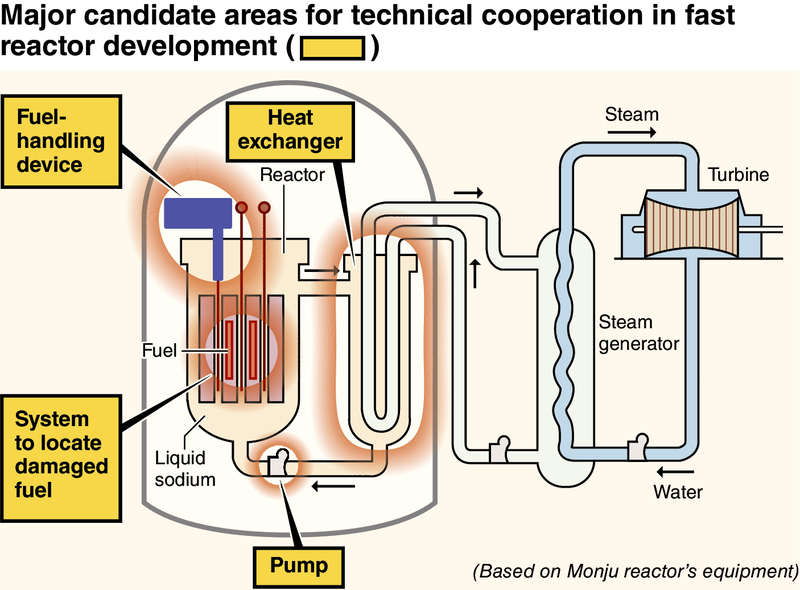 Japan and the United States will work together to develop technology related to core equipment and systems of nuclear reactors in a next-generation fast reactor project, according to the outline of a memorandum of understanding.

The memorandum is expected to be signed later this month by U.S. nuclear start-up TerraPower, LLC, the Japan Atomic Energy Agency and Mitsubishi Heavy Industries, Ltd. They also plan to sign a confidentiality agreement on sensitive technologies. After the Japanese side receives design information from the U.S. side, they will sign a formal agreement, perhaps this summer.

According to sources, the candidate areas of cooperation will include equipment for placing new fuel in a reactor and removing spent fuel; a system for locating damaged fuel while a reactor is in operation; a technology for pumps and heat exchangers to circulate liquid sodium, which serves as a coolant that extracts heat from the core; and technology related to in-core structures such as plates to block radiation. Based on the design of the fast reactor, the two sides will discuss technical details regarding each area.

With support from the U.S. Energy Department, TerraPower plans to begin construction of the reactor in Wyoming in 2024 and will aim to put it into operation in 2028.

On Thursday, Economy, Trade and Industry Minister Koichi Hagiuda held a videoconference with U.S. Energy Secretary Jennifer Granholm, during which he mentioned the Japanese government's intention to support the technical cooperation. Granholm expressed her high hopes regarding Japanese technology.

The envisaged fast reactor is designed to transfer heat, which is generated in the core, to a heat exchanger using sodium, and the heat will be used to convert water into steam to activate a power generation turbine. Liquid sodium is silvery-white and opaque, unlike water, which is used as a coolant in mainstream nuclear reactors, so the fuel and structures inside a reactor cannot be directly seen by a camera.

Of particular interest to the U.S. side is the technology to safely remove fuel and replace it as planned. This is essential for the stable operation of fast reactors and the efficiency of maintenance and checkups. If damaged fuel can be identified, it would be possible to restore operations promptly and prevent an accident.

Since the 1970s, the United States has kept its distance from full-scale fast reactor development, producing sparse achievements in the field. On the other hand, Japan has operated fast reactors for a cumulative 250 days with the Monju reactor in Fukui Prefecture, where decommissioning work is underway, and for about eight years with the Joyo reactor in Ibaraki Prefecture, which is currently not in operation pending safety screenings.

Even after Monju's decommissioning was decided in 2016, JAEA and other entities have continued their research on related technologies. They are developing compact equipment to handle fuel that requires lower costs.

Damaged fuel has been usually confirmed by shutting down a reactor and moving the fuel to another location. Currently, research has been carried out on a system that can identify and locate damaged fuel with high accuracy, while the reactor remains in operation. The envisaged system will use a sensor inside the reactor to detect gas emitted from fuel if it is damaged, according to the sources.

The Japanese parties have also developed a system to detect sodium leaks quickly, based on the lessons learned from the 1995 Monju accident in which sodium leaked from a pipe.