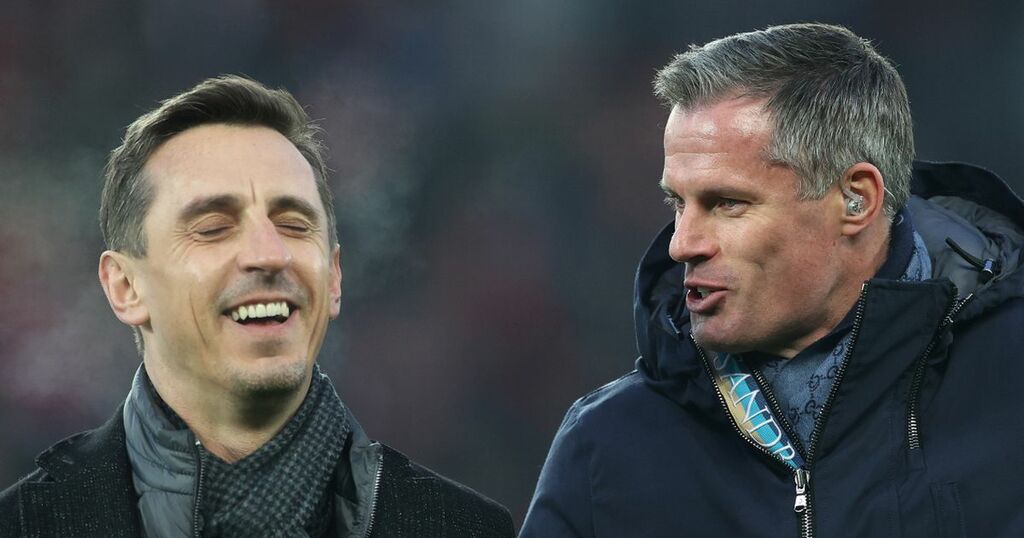 Jamie Carragher never misses an opportunity to wind up Gary Neville, with his latest cheeky dig coming via a Twitter Q&A.

The Liverpool icon was speaking to fans on social media because he was "bored" and it was raining.

Carragher was not on Premier League duty for Sky Sports due to the third round of the FA Cup taking place this weekend.

Saturday also marked the 25th anniversary of the ex-defender's Liverpool debut against Middlesbrough.

A question on Neville eventually came up in the Q&A, as one fan asked: "Who is your favourite Manchester United player of all time (you can say Gary Neville)?"

To which Carragher replied: "Roy Keane."

Who is Manchester United's greatest player of all time? Let us know in the comments below!

Carragher and Neville have become good friends since they started working together in punditry in 2013 and often joke about each other.

The two were rivals during their playing days, as Carragher's Liverpool tried to stop Neville's Untied from winning the title each season.

"When he was playing I didn't like him," said Carragher in November 2018, as quoted by The Independent. "I think we were both very similar in what we were for our clubs.

"We weren't the superstar player. We had Steven Gerrard and [United] had David Beckham or Eric Cantona. We were the solid citizens of our clubs.

"Both defenders, and we know how it works, the attackers can win you the game but the defenders can lose you the game, and our job was to make sure we didn't lose the game."

On their relationship now, Carragher added: "He went into punditry three or four years before me. He's been a revelation, he's been absolutely brilliant.

"We were put together and I wouldn't say we had much a relationship before that. As players we mixed at England but not too much, I wouldn't say. But now we do, we're never off the phone to each other!"

There were several hilarious responses from Carragher during his brief, spontaneous Q&A.

One fan asked: "Dear Jamie, my kids clubbed together to buy me this book [Carragher's] for Christmas. Is it worth reading?"

To which Carragher replied: "It is if you're having trouble sleeping!"

He also backed Duncan Ferguson to win a "prizefighter no rules" scrap with Roy Keane, Vinny Jones and Graeme Souness.

Perhaps the best response was directed at a Man Utd fan with Eric Cantona as his profile picture, who asked: "Jamie, how many Premier League titles do you have?"

To which Carragher, who famously never won the title, replied: "The same amount of Champions Leagues as Cantona."

He revealed he "wasn't good enough" to play in midfield for Liverpool and claimed John Terry was a better defender than Rio Ferdinand, but only "edging" the contest.

And he called for Liverpool to sign Borussia Dortmund talent Jude Bellingham in the summer.

The midfielder, 18, is viewed as one of the best young players in Europe and has been linked with the Reds in recent months