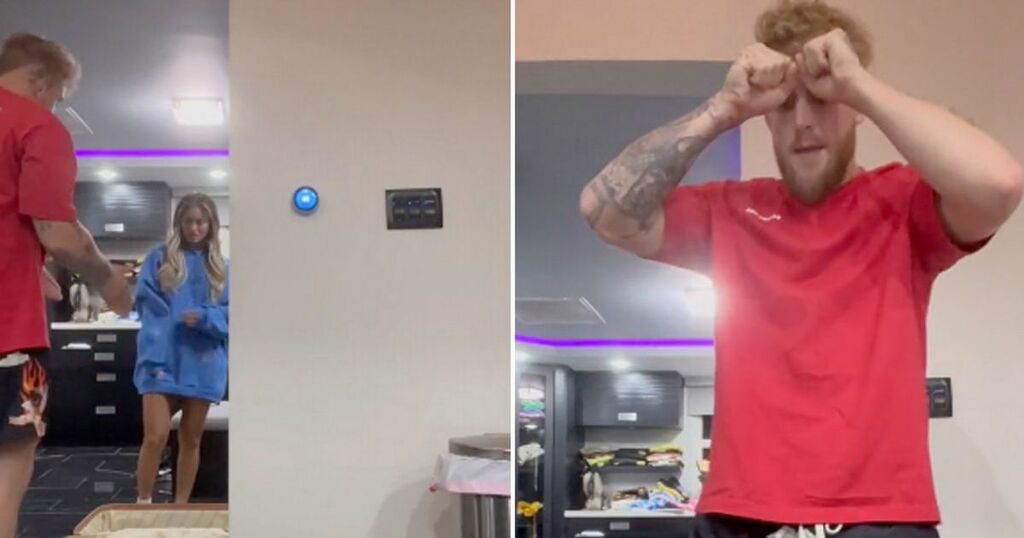 Jake Paul and girlfriend Julia Rose have issued a comical response to Tyson Fury's warning to keep the "women" of Florida close.

Paul will be facing Tyson's brother Tommy in the Sunshine State on December 18 as the rivals look to settle their feud.

The American has been rowing with the whole family including heavyweight world champion Tyson.

Fury previously joked during an interview: "You know when Big T [Fury] is in town, they're not safe.

"Lock up your women and hide your men when we're in Florida. Jake Paul keep your girlfriend on a leash."

The warning has now elicited a response from Paul on TikTok who filmed a comical sketch with his partner.

It shows him apparently locking his girlfriend in a suitcase while consistently panicking over "Big T coming to town."

His partner Rose is then carried to the front of the camera while Paul mutters: "He is going to f*** everybody, you need to hide in this suitcase, you will be in here for a little bit."

Rose then asks: "Doesn't he have a wife?" before giving the impression she is locked in the case which Paul picks up and drops on to a bin before screaming: "Babe are you okay?"

Before Paul then throws the suitcase back across the room with audible screams seemingly coming from the bag.

Fury's fight with Paul became a reality after the former outpointed Anthony Taylor on the undercard of Paul's win over Tyron Woodley in August.

Fury's brother Tyson is currently training him to face Paul and is set to be in his corner when the fight takes place across the pond later this year.

Do you think Tommy Fury will have the advantage over Jake Paul with his brother Tyson training him? Let us know your thoughts in the comments section below

And the 'Gypsy King' has been at the forefront of promoting the event including branding branding Paul a "w*****" at this week's press conference,

And Paul has called out the 22-year-old Fury to donate his purse to his brother Tyson in a dig at his lack of trash talking ahead of their meeting.

“I think Tyson should be paid Tommy’s purse because he’s promoting the fight more than Tommy is," Paul said at the press conference.

"It’s nice to have somebody on the other side of the promotion who actually has a following because I’ve been promoting all of these fights by myself. Finally Tyson Fury steps up to the plate and does some promoting.

"I’m sick and tired of carrying promotions by myself so thank you Tyson, I tip my hat to you. But I’m going to steal all of your fans. I’m going to knock out your brother and be on my merry way.

"Another payday. Another speed bump on the way to becoming a world champion and the biggest prizefighter in the world."