J Balvin’s rainbow Air Jordan 1 was arguably one of the hottest kicks of 2021. In part two of his Nike partnership, the Colombian king has been subtle about revealing his upcoming Air Jordan 2.

Along the way, J Balvin has dropped hints about the bright LED lights infused into the sole and branding. Thanks to the ever-reliable @solebyjc, the fog has cleared and the sneakers have been unveiled in all their summery glory.

Appearing in a sky blue color scheme, the sneakers add some of J Balvin’s playfulness by reimagining the Air Jordan 2’s construction. Instead of the leather that typically accompanies the AJ2, the upper is fitted with puffy ripstop panels across the collar and midfoot.

Despite the fact that he has a 10-track album with songs dedicated to a rainbow of colors — and a rainbow sneaker under his belt already — the Air Jordan 2 strictly favors blue skies. The heel overlays and inner lining are printed with serene cloud graphics, matching the other various shades of blue that take up the upper, outsole, and lace stays. His signature yellow smiley face lies underneath the translucent heel overlay, and the tongue tags have been struck by his lightning bolt motif.

As previously predicted, the Colombian superstar also has some hidden elements built into the sneaker. The tongue’s logo is fitted with an LED light, and the outsoles have some glow-in-the-dark elements, too. J Balvin shared the lighting features on Instagram, noting that the lights will glow through a manual button.

Michael Jordan’s second signature shoe isn’t as celebrated as some of the other AJ models, but its recent resurgence has sneakerheads looking at the kicks in a new light. A Ma Maniére gave the silhouette a luxurious snakeskin makeover (set to release in June after a delay) and Union revamped the kicks in a springtime “Rattan” remix. Off-White also dropped an Air Jordan 2 sneaker in November 2021 and prices promptly skyrocketed after the label’s designer Virgil Abloh passed later that month.

J Balvin’s Air Jordan 2 sneakers are slated for an October release and official images should be on the way soon. Summer will have come and gone by then, but that doesn’t mean you can’t bring the buenas vibras to the fall. 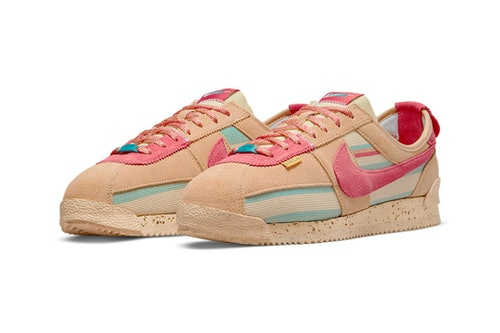 Nike and Union’s retro Cortez sneaker is ready for a ‘70s summer
A vintage look dresses the Cortez, just as it celebrates its 50th anniversary.

It joins the expected lineup of post-Astroworld sneaker releases.