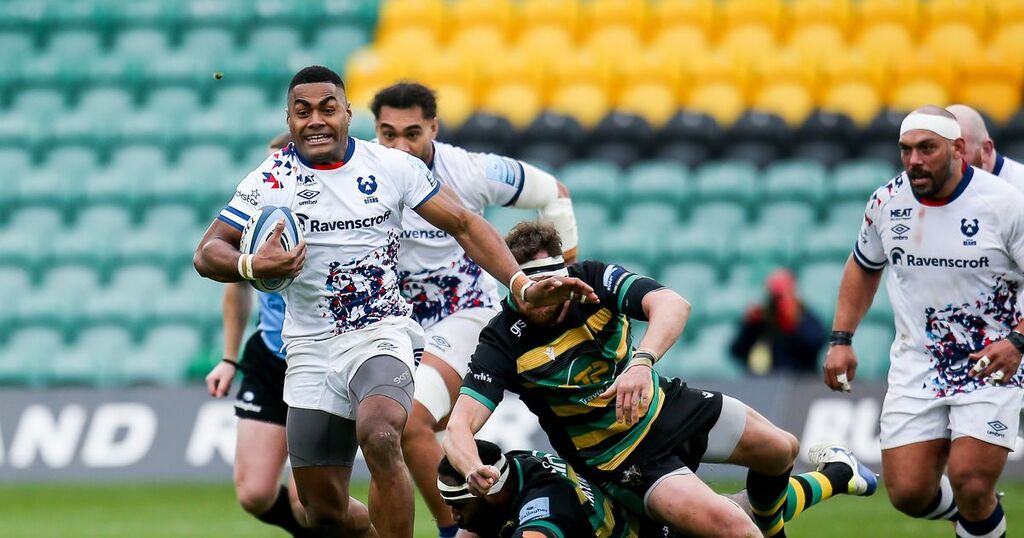 Bristol Bears are set to have another lethal gun in their attacking arsenal back as soon as next week with Pat Lam confirming Fijian winger Siva Naulago is on the verge of an injury return.

After converting from rugby league last season, Naulago was on his way to being one of the top try scorers in the Gallagher Premiership with seven tries in nine appearances before a knee injury ended his season.

Having recovered from that ailment, Naulago was setting the standards in pre-season at the Bears over the summer only to break his arm in the club’s internal friendly a week before the 2021/22 league campaign kicked off.

But having had surgery, ‘the tank on the flank’ is back fit and ready to fire confirmed the Bears’ director of rugby.

Lam said: “He is doing very well. He is not far away.

“It is a real credit to the medical staff on that one. As Rory Murray, the head of medical said, a lot of people re-break this type of injury, they have just not healed properly, so we have been overcautious on this one.

“We were hoping he would be back in December, and he probably could have been, but we wanted to make sure it was completely healed up.”

But is time for the serving soldier in the British Army to report back for duty at the elite level of club rugby, perhaps as soon as next week away at Scarlets in the final pool stage game of the European Heineken Champions Cup.

Lam said: “He potentially could be back next week.

“He has been training now which is great and this is a good news story for the club because he was looking really sharp in pre-season only to get injured in the final week.

“He is certainly up to speed, he is looking fast.

“He is the fastest player in our squad and he is looking really sharp so hopefully it won’t be long until we can unleash him.”

With Ioan Lloyd back and impressing on the wing, along with Henry Purdy and Luke Morahan who both missed the start of the season through injury, the Bears' backline is suddenly looking more like the outfit that terrorised defences in 2020/21 on the way to finishing top of the Premiership table.

Not for the first time this season, Lloyd lit up Ashton Gate on Friday night in the bonus point victory over Sale Sharks, setting up the fourth Bears try of the night for Andy Uren with the clock in the red on his way to 124m in attack and eight defenders beaten.

Discussing the former of his wingers, Lam said: "Ioan is getting better and better.

"He had a patch where [his form was patchy]. We just told him to do the simple things well.

"He has unbelievable skills but sometimes you don't need to do the fancy things, you need to do the simple things well and the rest will come. That has been a big change for him, a big shift, but when you get your moments right [it is impressive].

"You can see his tackling has improved, that was an area he wanted to improve in, Wales wanted him to improve in as well, and you can see the quality of his tackles now and that is testament to the effort he has put in.

"Luke [Morahan] has been out for a while, he has come in and did well at full back with Charles Piutau missing out. Guys are just stepping up and that is what we want. That is what we were doing week-in, week-out last season."