‘It’s not sustainable’: overcrowding is changing the soul of US national parks 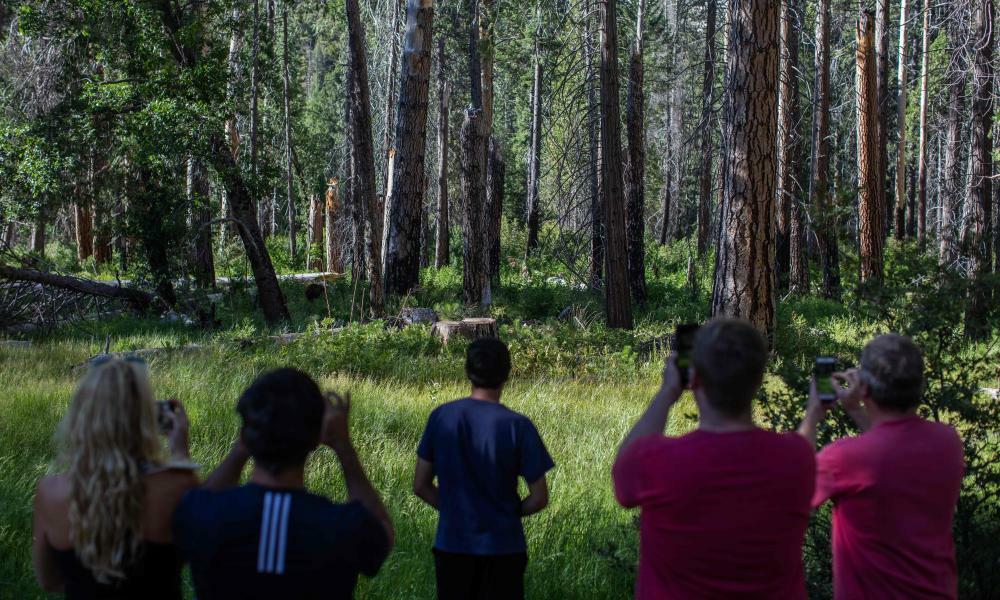 On a two-lane road leading to Acadia national park’s picturesque Bass Harbor head lighthouse, traffic has come to a standstill. A row of cars wait to enter the parking lot, with one local turning around altogether to try again on a less crowded day.

Visitors have flooded national parks this summer as Covid-19 regulations eased throughout the US. The National Park Service reported that half of recreation visits are occurring within just 5% of all parks, with significant congestion concentrated in the most popular 12 to 15 high-profile destinations.

Park officials are encouraging visitors to “plan like a ranger” and avoid crowds, although some locals are hesitant about regulating access to public lands. The Guardian spoke to five people who live near national parks to gather their experiences as visitation reaches record-breaking numbers.

We’ve been so busy since we reopened that we’ve started closing on Sundays just to give everybody a break. The Gatlinburg, Tennessee, community is definitely dependent on the tourism market. We employ about 62 people right now, and before Covid we seated 252 people. During the busiest seasons, we have lines up the porch and out into the parking lot. We always get people from the surrounding states, but this year we’ve had a lot of people traveling farther, from California, New York, Washington and Oregon.

I worry about people that litter. There’s a section of road we refer to as the Spur. Sometimes the litter on there is horrible because people just don’t care. The park service and a lot of the community associations do litter cleanups on the Spur because that’s people’s first view coming into our park, but it makes me so mad.

I worry about the park getting so crowded that they will have to make appointments for you to go in. They’ve done that with the firefly event we have here every June. It got so crowded the park had to start doing a lottery for visitors to go in.

We’re very, very protective of the park, and I don’t want to see it when people can’t just drive into it. To me, the Great Smoky Mountains is the most magnificent park, but that’s because it’s part of me, I love it. It’s not just a national park. It doesn’t just belong to you. It’s part of our life.

I grew up in the Bay Area. Muir Woods was somewhere my dad just saw on a map one day. We drove over and saw this amazing forest with no prior planning involved. The thing I remember most is feeling a sense of solitude, just enjoying the quiet and how crisp the air was.

It’s still breathtaking now, but that sense of solitude is not as apparent any more. There are always people in front and behind you on the trails, and if you don’t go fast enough they’ll pass you by. There’s a lot of construction going on because the park is improving the trails and adding new walkways. It didn’t occur to me that noise pollution would be a problem, but once we reached a section called Cathedral Grove, where visitors are told to minimize the noise they made, I noticed the sounds of the forest. That’s what I had been used to hearing more of in the past.

Three or four years ago, park workers wouldn’t let my family in because the parking was full and previous registration was at capacity. Reservations have to be made a week in advance. Even then the nice times are already booked, so you either have to go really early or later in the afternoon. If I have someone who’s visiting the area and they’ve never seen the redwoods then I’ll go, but my family and I haven’t visited since.

Our visitation numbers really began to pick up on 21 December 2020, following the eruption of Kīlauea. We went from having a few hundred people on 20 December to almost 8,000 people the next day.

We’ve traditionally had overcrowding in the winter holiday season because people want a warm Hawai’i vacation. The park is over 335,000 acres, which is roughly the size of the island of Oahu, but the areas that people visit are at the summit of Kīlauea, so it can be congested.

We aren’t looking at implementing reservations at this time. We’ve tried to lean in heavily to digital tools, such as the website and the new NPS app, to encourage visitors to plan ahead. There are so many opportunities when, with a little planning, you can arrive when there are very few people and have a better experience.

Hawai’i Volcanoes is a living cultural landscape. People come to the park to practice their culture, and that is something that is near and dear to all of us who have the privilege to work here. You have to understand something before you can help preserve it and treat it with respect.

I launched Lamar Valley Touring right before the park shutdown in March due to Covid-19. In June we reopened with the expectation of having no business, but all of a sudden we were busy every single day of the 2020 season. We’ve grown exponentially based on the fact that the park is probably at its busiest in the history of Yellowstone.

I have two people who work for me, and it is not manageable. I could probably have five more guides and two or three more vehicles on the road. I’m turning down between two to eight tours almost every day. We are all working as hard as we possibly can. It can be up to a two-hour wait at some of the entrances, but so far they’re not doing online reservations or turning people away. The Northern Range, where I am, has not been too overwhelmed because many people don’t know about it.

I don’t think there’s anything negative about people wanting to get outdoors, but we have to make sure that the people and animals are both safe. Every summer, we will have an altercation between a bison and a visitor, and that’s usually because the bison has been around people all day and that one last person gets a little too close. Part of my job is to teach clients the “leave no trace” principles and how to be aware of their surroundings.

I’m not sure if implementing reservations is exactly what I want, but something needs to be done. We can’t keep growing the visitor population. It’s just not sustainable.

People really started coming back in May 2020, and by June it almost felt like a normal season again. I liken us to an airport because we get people from all over who are accustomed to very different Covid protocols.

We’ve seen a whole bunch of people new to experiencing outdoors, so there’s a big education component that’s landed on us. We definitely want people to enjoy the outdoors, but we want to make sure they’re not writing on the rocks and other things that are astounding to most of us. I hear the amount of graffiti is very, very different than two years ago. It’s a little heartbreaking.

Some of our favorite trails got washed out by a big rock fall almost two years ago. Every time you lose a trail, people get more and more concentrated. At the inn we provide a newsletter, and we spend a lot of time suggesting places besides the main canyon to go up. It spreads things out and is better for the land and the visitor’s experience.

It’s tricky to keep the balancing act of access versus overcrowding and abuse. If the park were to do a reduced entry, capacity-informed entrance rate, it might impact our business a little bit, but taking care of the park as they see fit is the most important thing. If we get a reputation for not being the experience people came here for, everybody loses at that point.