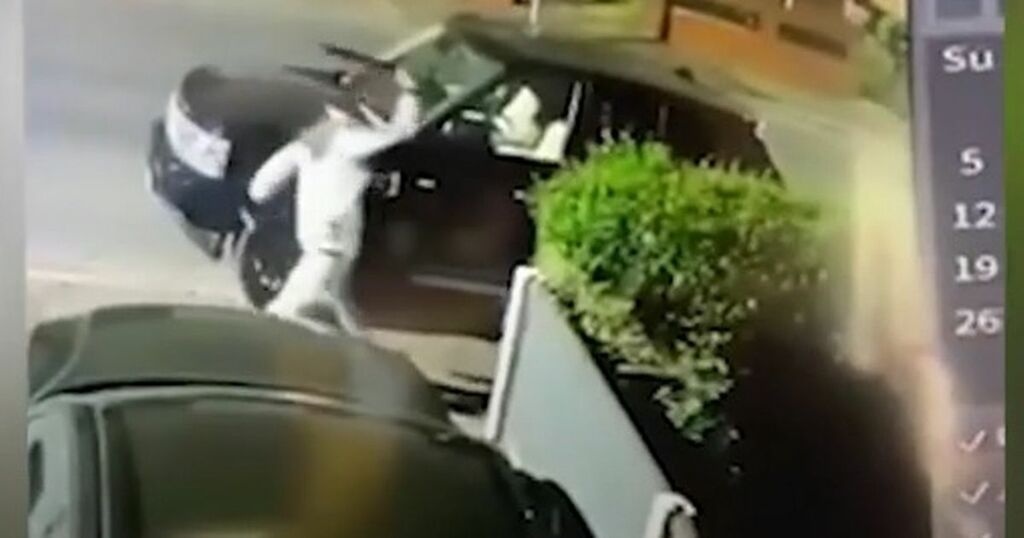 This is the shocking moment a man appears to swing a 'machete' at two car wing mirrors.

The incident was captured on a CCTV camera on Nuthurst Road in New Moston, Manchester.

It was shared with the Manchester Evening News by the owner of one of the cars targeted.

The woman, who has asked not to be named, lives on the road with her family.

She owns one of the damaged cars, a Range Rover, whilst her daughter owns the Volkswagen Polo that was targeted.

She said the family first realised that something had happened after her daughter went out to her car and saw blood on the windscreen.

They then checked the CCTV, which showed a man walking down their road and smashing at both cars' wing mirrors with what looked to be a machete.

"My daughter went to get in her car and she noticed blood on the windscreen", the woman said.

"Forensics came out the take samples but they said they had no match with that blood.

"We saw the CCTV with him with the machete.

"You can clearly see how big that machete is, someone had put on Facebook that same day that someone was doing the same in Failsworth so he could have walked all that way."

The woman said she wanted GMP to take the incident seriously.

"This happened nearly three weeks ago and the first time we have seen a police officer was on Monday", she told the M.E.N .

"My daughter was going to get herself a new car but she said it has put her off."

She said it was the second incident the family have dealt with in the past three months, with two of their cars being broken into earlier in the year.

She added she cared more about the danger the suspect poses, rather than the damage done to the cars.

"It's about that someone is walking around with a machete", she said.

"We work hard for the things that we've got it's just frightening to know that that person is walking nearly a mile or two miles with a machete and no-one has seen him."

In a statement, Greater Manchester Police said: "Officers received a report on 4 September 2021 that a man had damaged a vehicle with a bladed article on Nuthurst Road, New Moston, sometime in the previous week.

"No arrests have been made and enquiries are ongoing."