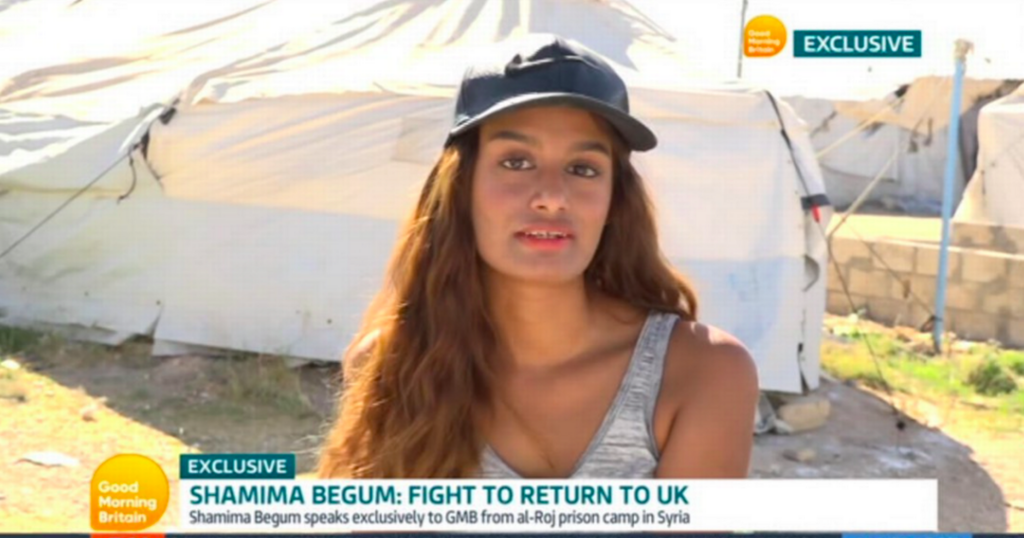 Shamima Begum, the London schoolgirl who fled her home in 2015 to join the so-called Islamic State terror group in Syria, has said the UK Government 'doesn't have anything on her.'

The 22-year-old, who has had her British citizenship revoked by the Home Office on national security grounds, told ITV's Good Morning Britain in a live interview: "I am willing to go to court and face the people who made these claims and refute these claims, because I know I did nothing in IS but be a mother and a wife.

"These claims are being made to make me look worse because the Government do not have anything on me.

"There is no evidence because nothing ever happened."

She added: "I would rather die than go back to IS."

Begum, who frequently swept the hair from her face with hands decorated with pink-coloured nail varnish, denied being directly involved in terrorist preparations.

Asked for a message to Boris Johnson, Begum said that she could help the Prime Minister in "your fight against terrorism because you clearly don't know what you're doing".

She said: "I want to say that you are clearly struggling with extremism and terrorism in your country. And I want to help with that with giving my own experience from with these extremists and what they say and how they persuade people to do what they do and to come to places like Syria.

"I think I could very much help you in your fight against terrorism, because you clearly don't know what you're doing."

Begum added that while she believes the only crime she committed was being "dumb enough" to come to Isis, she still deserves a fair trial.

She said: "Honestly, the only crime I think I committed was being dumb enough to come to Isis, and even that can be refuted because I was 15 when I came, and you can't, you know, judge a 15-year-old for making a mistake which he or she very quickly regretted making.

"If you really think I did do this, why don't you bring me back and put me on trial, and hear my side of the story.

"If you if you honestly believe that, don't you think I just have to go to jail for it.

"The fact that you think I should rather rot here, instead of face trial... the democracy that you live in, says that everyone deserves a fair trial."