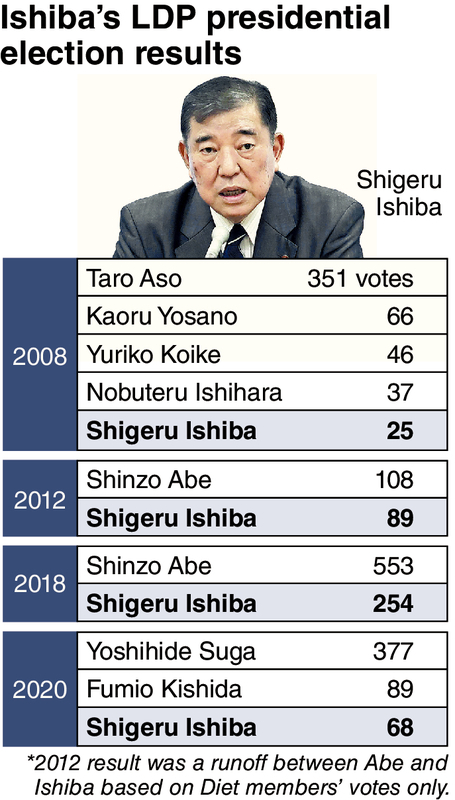 Shigeru Ishiba, a former secretary general of the Liberal Democratic Party, is considering not running for the LDP presidency and instead supporting Taro Kono, the minister in charge of administrative and regulatory reform, The Yomiuri Shimbun has learned. Ishiba plans to call on Kono to promote the policies that Ishiba emphasizes. Depending on Kono's response, there is still a possibility that Ishiba will run himself, sources close to Ishiba said on Monday.

The LDP's presidential election campaign will officially kick off on Sept. 17, with voting to be held on Sept. 29.

Ishiba has been coordinating with Kono's side behind the scenes. "I haven't said that I will or will not run," Ishiba said on a TV program on Monday. He told those around him, "It's not a matter of running for the presidency, but it's important to realize the policies that I value. If I don't run, I can support Kono."

There are growing voices within the Ishiba faction that he should not run this time. "I am against [Ishiba's] running for president. To promote reform, supporting Mr. Kono is one option," said a senior member of the faction.

Masaaki Taira, a member of the House of Representatives in the faction, informed Ishiba of his intention to support Kono. The faction plans to hold a meeting on Tuesday.

The Ishiba faction is a small one, with 17 members. For Ishiba, the key to winning the presidential election is how many party members' votes he can get. However, since high-profile Kono has decided to run, there has been widespread concern within the faction that party members' votes would flow to Kono.

Meanwhile, Kono had a 30-minute meeting with Deputy Prime Minister and Finance Minister Taro Aso, who is also the head of the Aso faction to which Kono belongs, at the Finance Ministry on Monday. While Kono reiterated his intention to run for the post, Aso reportedly told him to listen carefully to the opinions of the senior members of the faction. Kono then met with Akira Amari, the chairperson of the party's research commission on the tax system; Eisuke Mori, former justice minister; and Shunichi Yamaguchi, the former minister in charge of Okinawa and northern territories affairs, all of whom are cautious about Kono's candidacy, to seek their understanding.

Former LDP Policy Research Council Chairperson Fumio Kishida, who has announced his candidacy, spent an hour visiting the offices of the party's House of Councilors members on Monday. Sanae Takaichi, the former internal affairs and communications minister, stayed in her public dormitory for Diet members and called her colleagues to appeal for their support. LDP Executive Acting Secretary General Seiko Noda sought support from members of the Nikai faction and others to secure the recommendations from 20 LDP lawmakers needed for her candidacy.

Prime Minister Yoshihide Suga met with LDP Secretary General Toshihiro Nikai at the Prime Minister's Office on Monday. "A political vacuum [due to the presidential election] is unacceptable. I will take all possible measures to combat the novel coronavirus," Suga told Nikai, calling for cooperation within the party.

"It's tough [for Ishiba to be] behind a fresh face like Kono in the popularity contest," a young member of the Ishiba faction reportedly said on Monday, expressing his concern to those around him.

However, in a nationwide opinion poll conducted by The Yomiuri Shimbun on Saturday and Sunday, Kono was the top choice of respondents as the most suitable person to be the next prime minister with 23%, two points ahead of Ishiba. The gap widened to 9 points when the results were limited to supporters of the LDP.

The Ishiba faction, with 17 members, cannot provide him the 20 recommendations needed to run for the presidency. Moreover, Masaaki Taira, a lower house member, and others from within the faction are expected to support Kono, making it difficult even to achieve unity within the faction.

The fact that some members of the Nikai faction are moving to support Ishiba's candidacy is also causing opposition within the Ishiba faction.

"If he enlists the help of the Nikai faction, he may be labeled as 'outdated,'" a middle-ranking lawmaker of the faction said, expressing concern. "This time, he should ride with Mr. Kono, who is on the same reform path, to secure a post in the next administration and wait for the next chance."