Is Kim Kardashian’s Met Gala Look A Nod To ‘Donda?’ 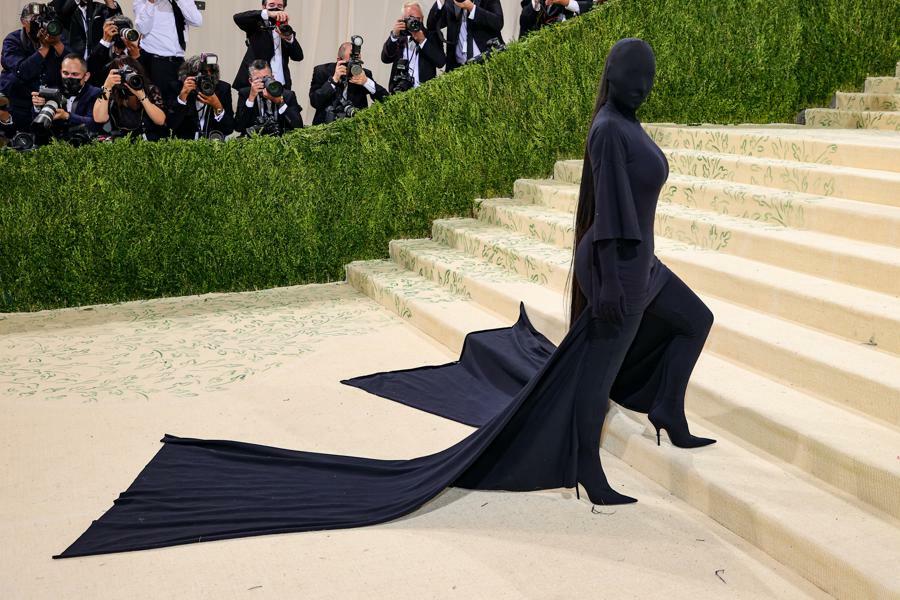 The Americana theme hits its most poignant spot in the costume worn by Kim Kardashian West, who was decked out in black regalia from head to toe on Monday night at the MET Gala in New York City.

Over the past few weeks, since she attended Kanye West’s listening party for his latest album Donda, she caused a stir wearing an all black Balenciaga bodysuit, looking a bit like Catwoman or maybe even Leigh Bowery.

Here, she Kardashian and West hit the red carpet in probably the most anti-fashion outfits the red carpet has seen in awhile, especially for such candid celebrities: Balenciaga outfits that covered both of their very famous faces.

The Twittersphere had thoughts on what it could connect to. One compared her to a Harry Potter villain Dementor, others said she looks like the Grim Reaper, or as Wraith from Lord of the Rings. Others said it showed her as a shadow of her former self.

One truly wonders if its just a body double cosplaying Kardashian as the void on the red carpet.

But the most quixotic reference (besides it being a symbolic reference that her and West could potentially be back together) is that its a symbol of the Donda album cover, which is an all black square.

In many ways, her outfit could be seen as a protest, just like the Black Square painting that Russian artist Kazimir Malevich painted in 1915. It caused outrage at the time, as it was referred to as the “zero point of painting,” and the artist tied it to the Suprematism art movement, which hailed simplicity of geometric forms above all else.

Looking back now, art historians hail the Black Square as one of the most important works of modern art. Malevich said it was “emptiness of a liberated nothing.”

As Malevich also said about the black square: “Before us is nothing but a black square on a white background! Man's skull represents the same infinity for the movement of conceptions. It is equal to the universe, for in it is contained all that sees in it.”

With the Americana theme of this year’s Met Gala, a celebration of “American fashion.” Note: Balenciaga is a fashion house based in Paris. According to the curator of the MET’s Costume Institute, American fashion is undergoing “a renaissance.” (Really, with fast fashion still in high production?).

Kardashian’s outfit outwits them all, as the ultimate think piece of the night.

As Malevich said: “In art there is a need for truth, not sincerity.” A century later, it still rings true.