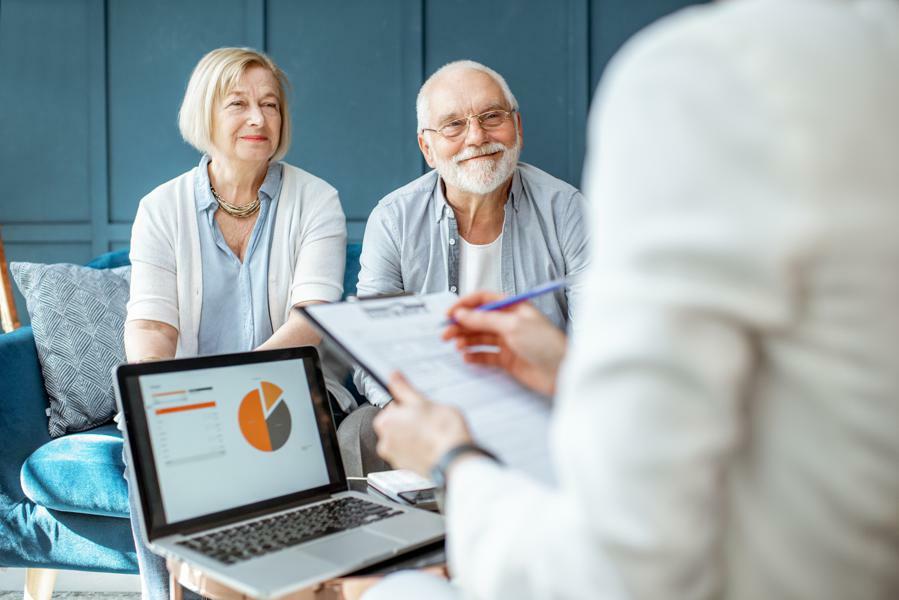 “I recently retired at 65 with $500,000 of financial assets – I was never very good at saving money and don’t own a home. My income from here on out will be social security plus whatever I can squeeze out of the $500,000 of assets before it is all gone. How do I do that without fear of running out?”

You are not alone. About 10,000 people reach age 65 every day and at least half of them face the same quandary as you. Our existing retirement system is focused mainly on retirees who are wealthier, because that is where the hefty commissions are.

Rate of Return on Assets Is Critical

While the return on your assets in the future is not known, we can make educated estimates of the rate that is expected or most likely, and the rate that would be a “bad case”. It is wise to base your plans on the first while protecting yourself against the second.

I base these estimates on historical data that show distributions of returns over periods of various length, for asset portfolios with different mixes of common stock and fixed-income securities. In the table, the expected rate of return is defined as the median rate in the distribution of returns while the “bad case” is defined as the rate that was exceeded in 98% of the periods.

Given your age, the more conservative asset portfolio is appropriate, and I use 10-year periods for reasons that will be explained below. The rates I use in evaluating your case are thus 6.1% as expected, and 2.8% as a “bad case”.

The traditional way to convert a current asset value and interest rate into a payment stream is to assume a terminal date at which point the financial assets are exhausted and the payment stream ends. The stream can be level or graduated to reflect rising prices. In your case, I assume you live to age of 104 and that payments will rise by 2% a year until then. The top line on Chart 1 shows spendable funds on those assumptions when the expected 6.1% rate of return materializes.

The declining line on the chart is based on the assumption that the bad-case rate of 2.8% materializes. The probability is low but you want to avoid it if you can. Financial advisors sometimes recommend dealing with this risk by basing payment amounts on what is called the 4% rule.

The 4% Rule Eliminates Payment Shortfalls – If You Don’t Live Too Long!

Using the 4% rule, the initial monthly payment is calculated at 4% of your initial assets, divided by 12, and that amount increases by 2% every year. The lower of the upward trending lines in Chart 1 shows payments using the 4% rule if the expected 6.1% rate of return materializes. In the bad case, the pattern is identical until your assets are exhausted, at which point the payment drops to zero. This happens when you reach 93.

An annuity is the only financial instrument that is specifically designed to provide payments until death. I use a deferred income annuity on which payments are deferred for 10 years, and you receive nothing if you die within that period. On October 9, this would cost you $296,194. You will draw the remainder of your $500,000 nest egg during the 10-year deferment period, which will be fully exhausted when the annuity kicks in. [Note: The annuity cost is calculated to provide a seamless transition from asset draws to annuity payments, using a program developed by my colleague Allan Redstone.]

Charts 2 and 3 show your monthly spendable funds, pre-programmed to increase by 2% a year, with and without the annuity, using the expected rate of 6.1% and the bad-case rate of 2.8% respectively. With expected rates, spendable funds are very slightly smaller with the annuity than without – initially about $39/month (the difference increases to $48/month at age 80). That difference can be viewed as the cost of avoiding the risk of a bad case.

However, in a bad case scenario the results are very different. In this case, available draw from financial assets without the annuity decline for life, whereas payments from the annuity begin at age 75 and increase for life. At age 80, the difference between the two options is $1,039/month – this is shown in Chart 3.

In sum, by purchasing an annuity that reduces your spendable funds by $40-50 a month, you avoid the risk of losing about $1,000 a month – and this amount grows as you age. The only downside is that the annuity reduces your estate value.

Increasing the deferment period until the annuity payment begins reduces the median rate of return on assets but increases the bad-case return. This is because variability in asset returns is smaller over longer periods. While the bad-case decline in payments is smaller, it lasts for a longer period.

Chart 4 shows the bad-case using deferment periods of 5, 10 and 20 years, and illustrates why I selected 10 years. The-10-year deferment period avoids the sharpest drop in spendable funds during the first 5 years and provides the largest amount during the ensuing 10 years. But this is a judgment call and your preference could be different.

Someone in your financial position would do well to consider using a significant part of your financial assets to purchase a deferred annuity. If you consult a financial advisor whose fee is based on a percent of assets under management, which is the most common pricing method, keep in mind that an annuity purchase will reduce their fee.