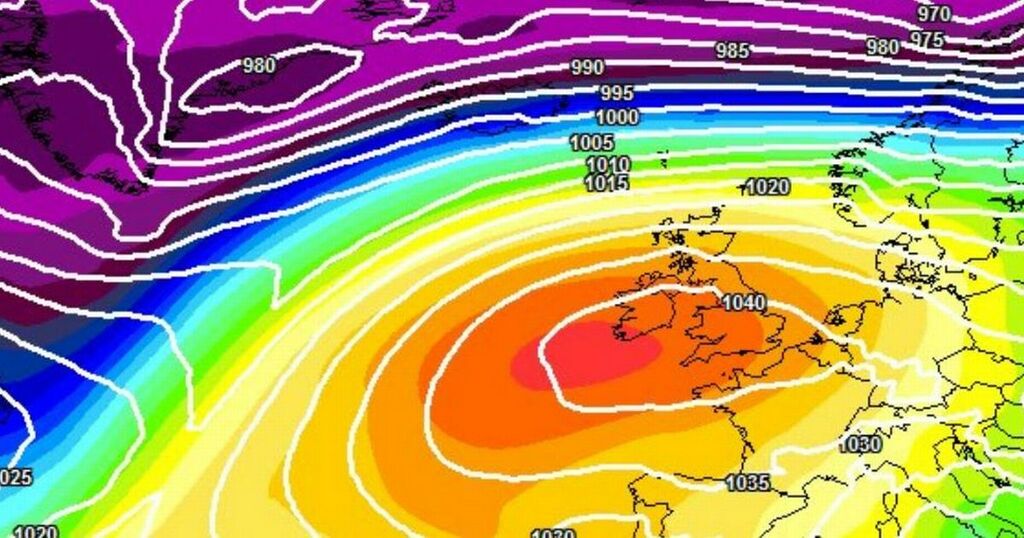 Met Eireann have forecast a major change to our weather in the coming days as a new system is set to become established.

A far more settled spell of weather is expected as the week goes on, with high pressure set to become "dominant".

Expert Alan O'Reilly from Carlow Weather explained that there is no "real cold" expected for the next week and beyond.

He said: "Pressure rising and nice settled spell of weather from Tuesday for most of next week. Milder too in general but some cool nights.

Meanwhile Sunday looks set to bring some light rain and showers with even the possibility of hail in places, before a largely cloudy night.

A Met Eireann forecaster said: "A chilly start with some icy patches in places. Showers will continue in Ulster, some of sleet or hail, but will become isolated elsewhere with good sunny spells for a time. Cloudier conditions with light rain or drizzle will develop in the southwest during the morning and will gradually spread northeastwards through the afternoon and evening. Highest afternoon temperatures will range between 6 and 9 degrees with the blustery westerly winds gradually easing.

"Tonight will be a generally cloudy night with patchy outbreaks of rain and drizzle. Lowest temperatures of 5 degrees in the north and east degrees occurring early on, with temperatures rising overnight in light southerly winds.

"Mild, damp and mostly cloudy for tomorrow Monday with patchy rain and drizzle but good dry periods developing in the east during the morning. Highest temperatures of 10 to 12 degrees in moderate south to southwesterly winds, veering westerly later. Later in the day cooler clearer conditions developing in the west.

"Patchy rain will clear southeastwards early on Monday night and it will become mainly dry and cold with clear spells. In light southwest or variable breezes some mist and fog patches will form along with a touch of frost. Lowest temperatures of 0 to 3 degrees.

"A bright and largely dry day on Tuesday with long spells of sunshine and just a little patchy drizzle along southern coasts and isolated light showers in the northwest. Highest temperatures of 6 to 9 degrees in light southwesterly winds, fresher near to the northwest coast.

"Tuesday night will be a dry night with long clear spells, allowing lowest temperatures to fall to between -1 and +3 degrees with frost developing in places in mostly light winds. Some mist and fog patches forming also."

And the rest of the week will see Ireland enjoy a "largely settled spell of weather", with only a small amount of rain or drizzle as a high pressure system dominates.

A forecaster added: "Staying mostly dry into Wednesday with spells of sunshine once the early mist and fog clears. Highest temperatures of 7 to 10 degrees, mildest in the west and southwest, in light to moderate southwesterly or variable winds.

"Thursday and Friday look to be mainly dry days though a little drizzle is possible at times on Atlantic coasts. Cloud cover will vary and winds will be generally light southerly or variable. Highest temperatures will range from 5 or 6 degrees in the east and northeast to a milder 8 or 9 degrees further west. Nights will be cold with some frost and dense fog patches forming."