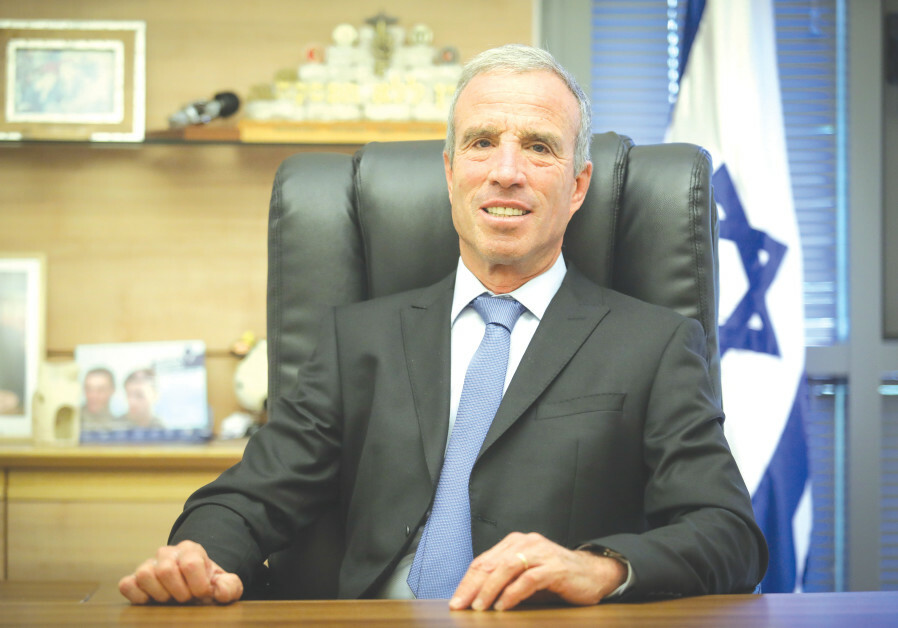 A guest entering Intelligence Minister Elazar Stern’s Knesset office is immediately confronted with a collage of media clippings and cartoons hung prominently on the wall, detailing the criticism, and the vindication as he would see it, meted out to him over some of his most hard-fought struggles.

And during the course of an in-depth interview, focusing on his candidacy to head the Jewish Agency, Stern is keen to underline those achievements, many of which have dealt with key issues facing the Jewish people.

As a senior officer in the IDF, following his service as a combat solider, Stern founded the IDF’s conversion program intended, in the main, for immigrants from the former Soviet Union.

He led a project to introduce bone marrow transplant match testing to the IDF enlistment procedure, an effort that has saved more than 2,600 lives to date, more than half of whom are Jews from the Diaspora.

Stern formulated the Edim b’Madim (Witnesses in Uniform) project which sends IDF soldiers to Poland to witness the concentration camps firsthand, and also headed a special committee that reformulated the IDF Code of Ethics and led to the writing of the “Yi’ud V’yihud” statement of principles, to strengthen Jewish and Zionist values in the IDF.

More than once, the minister and Yesh Atid MK cites the fact that he is the child of two Holocaust survivors as one of the primary factors in his focus on the concerns of Jewish peoplehood during his career.

“I understood from my parents that it is important that the Jewish people should have a country,” he says.

And he asserts that in Auschwitz, which his mother survived, “they didn’t make distinctions” between different Jews, something that he says informs his care and concern for all of the Jewish people, whether regarding immigrants to Israel from the former Soviet Union and their Jewish status; the integration of Ethiopian Jews in Israel; or the connection of the Jewish state to Jews around the world.

His candidacy to head the agency is therefore a continuation of that concern and ardor for the advancement of the Jewish people.

In recent years, however, critics of the national institutions, as they are known, including the agency, have increased in number, and have called into question the relevance and necessity for such organizations, which predate the establishment of the State of Israel, so many years after the country came into being.

Stern argues, however, that Israel is unique in its connection to its brethren abroad and says that the agency plays an important role, which needs to continue, in bridging between the Jewish state and Jews around the world.

“We are the country of the citizens of the State of Israel, but we are also the state of the Jewish people,” he says.

The minister argues that the agency, with leadership from the Diaspora, is an important vehicle for this role, and that by dint of their leadership roles, their work for the Jewish people and their contributions to both the Jewish people and the State of Israel, the senior officials of the agency “deserve to have their voices heard” in a formal manner.

Stern says therefore that if elected chairman he would make his voice heard loud and clear on issues decided in Israel that affect Jews around the world, citing reform on Jewish conversion in Israel and Western Wall prayer access for non-Orthodox Jews – both of which he has ardently supported – as concerns that Diaspora Jews should be heard on.

But at the same time, he says that Diaspora Jews also need to listen to Israel.

Stern says, for example, that he was disappointed in the level of support Israel received from Jews around the world during and after the recent conflict with Gaza in May, and that he would want Jews abroad to work “as our emissaries” to disseminate Israel’s perspective.

He says quickly that he does not expect Diaspora Jews to be “automatons” and reel off message sheets from the Israeli government, but that he does see greater potential for more activism for Israel.

“After the last operation in Gaza, I would have wanted them to be much more on our side, identifying with us, protesting for us, convincing their friends, more than what happened. It wasn’t enough,” he asserts.

At the same time, he acknowledges that Israel’s ongoing conflict with the Palestinians, and the stated position of many senior Israeli politicians, including recently Prime Minister Naftali Bennett, that Israel will not consent to the establishment of a Palestinian state, are important factors in the disconnect of many US Jews from Israel.

Asked if he himself supports the establishment of a Palestinian state, Stern says he supports “complete separation from the Palestinians,” which could involve an Israeli withdrawal from parts of the West Bank, although not from the Jordan Valley and the settlement blocs.

“We need to tell US Jews, and say the same in Israel, that we will not erase the possibility of separating. Even when we expand a settlement, it should be in our heads that one day we will need to separate.

“We absolutely must preserve the ability to separate, because if, God forbid, there will be one state, then all of our conversation here might as well be chucked into the sea.”

But the conflict is not the only reason Jews in Israel and the US have become distanced in recent years, something that Stern points out.

He is reluctant to say why, in his opinion, the connection between US Jews and Israel has weakened, and says he prefers to focus on how to fix the problem.

Stern insists that Israel must demonstrate “consideration” of all forms of Judaism and understand that “they all have legitimacy.”

But the minister also argues here that bolstering the connection of US Jews to Israel has to be addressed, at least in part, by tackling their connection to Judaism.

“My challenge is their belonging to Judaism. Those for whom it is difficult to identify with everything Israel does, I want to say okay, in the first stage they should feel belonging to their community, and feel proud of their Judaism, your community, your people.”

As such, he says that the agency should directly fund programs and activities of the different Jewish denominations and movements, Reform, Conservative and Orthodox, in the US, to bolster Jewish identity and affinity to the Jewish people.

In general, the agency has refrained from funding programs of the different denominations due to possible political sensitivities.

Asked whether the apparent failings of large parts of organized US Jewry in regard to preserving Jewish identity thus far would therefore mitigate against further funding, Stern demurred.

“In the stock market you invest when its down. The chances of bringing someone closer to me are greater if they identify with the Reform or Conservative movement than if they do not identify at all,” who counters.

“Those who already identify as a Reform or Conservative Jews have already come half the way.”

BY HIS own admission, Stern has frequently clashed with various elements opposed to his goals, whether it was politicians and IDF commanders who did not want the army to deal with religious conversion; opponents to his bone marrow transplant match testing initiative; or those who opposed the reforms he sought to advance in the Knesset on Jewish conversion, several years ago.

But the former general insists that his battles were all worthwhile, and further, that the criticism he received demonstrated to him he was going in the right direction.

“The question at the end is whether or not you advanced.... So you took fire. It wasn’t nice, and maybe not nice for your children. But the people advanced,” he says simply.

“Yes, you need to push the boundaries,” he avers, citing the Prophet Isaiah for good measure.

“Enlarge the site of your tent, extend the size of your dwelling... and drive the pegs firm,” he quotes.

But he insists that “you always need partners,” and that he has always taken into consideration what his opponents have said.

Stern is eager to praise the previous agency chairman and new president of Israel, Isaac Herzog, as well as the director-general he appointed, Amira Ahronoviz, for having “contributed to the rise of the Jewish Agency,” and says that the strategy program laid out by the organization has it moving in the right direction.

Asked whether he may, as in the past, come into conflict on various issues as chairman of the organization, he does not shy away from the question.

“What is conflict? There are good people there. Will I not debate and argue with them? I imagine that I probably will, as I did all my life. But you have to listen to people as well, which is what I always did before starting my programs in the army.

“You have to listen to people, although not so that everyone will divert you off your path. I don’t look for conflict, but I’m not afraid of it.”

In a final pitch, he says that he wishes, when it came to his own candidacy, that the decision is made almost exclusively on his personal record of achievement and his stated positions on different issues, before he sought the position of agency chairman.

“They should judge me on what I have done, and how I have expressed myself, what spirit and achievements I have brought, and if there are a few questions then to ask me as well,” he says.

“I am a public servant, a soldier of the Jewish people for 47 years. In the army; as a teacher in the periphery; when establishing a town in the Galilee, or establishing the Foundation for the Benefit of Holocaust Victims in Israel; as chair of the Ethiopian National Project – someone who sees all these things sees that this is really a soldier of the Jewish people.”•