After 24 years of trying, the England women’s hockey team finally won gold at the Commonwealth Games. They had played Australia in three finals before now, and lost every one of them. But on a sunny Sunday afternoon at the University of Birmingham, they finally beat them, 2-1, through goals from Holly Hunt and Tess Howard.

And if it wasn’t exactly easy, it wasn’t anything like as difficult as history suggested it would be, either. England were in control of the match throughout, and yes, by the end the fans up in the big grandstand were singing “hockey’s coming home”.

The team had actually had some good luck messages from Leah Williamson and the rest of the Lionesses come through in the morning. “They told us how some of our previous teams had inspired them in the past, and that they hoped that now they’d returned the favour by helping inspire us to do this,” the midfielder Flora Peel said. “And they definitely did.”

The victory went some way to making up for the defeats endured by the England women’s cricket and netball teams, who both lost bronze‑medal playoffs earlier in the day. “It feels like women’s sport is really taking off this summer,” Peel said, “and now it’s about capitalising on all those opportunities.

“You see what the Lionesses’ victory is going to do for them, and you hope this will do something similar for us, and the netball and cricket players too even though they didn’t make their finals this time. The more women’s sport as a whole can build on this momentum the better for all of us.”

Peel will hate this being mentioned here, but she happens to be the great granddaughter, five times removed, of Sir Robert Peel. There is a statue of him just down the road from the pitch.

They are not going to put one of her up next to it just yet, even if she is a graduate of the university. But she played brilliantly well, and had a hand in both goals. Both came in the second quarter. Hunt scored the first, off Peel’s centre. Howard got the second after making an interception, which she passed back to Shona McCallin.

She whipped the ball on to Peel, whose shot was artfully deflected into the net by Howard. It meant Australia, who have won this title five times, had conceded more goals in those four minutes of play than they had in the rest of the tournament.

“Australia are so good that we knew we had to come out fighting,” said England’s Lily Owsley. “Our coach told us to take the first swing and keep swinging, and we did, because if you sit off a team like Australia they will just keep coming at you.”

Australia tried to do that in the second half, but couldn’t find a way past Maddie Hinch. There were only 19 seconds left to play when she was finally beaten by Rosie Malone off a penalty corner. The crowd had just started singing their version of Three Lions. “I laughed and thought ‘I’m about to run on the pitch to celebrate here’ when I heard that,” Peel said. “And then the goal went in and I thought: ‘Oh no they’ve jinxed it!’”

England had been in this sort of situation before. In the 2014 final they were leading 1-0 when Australia equalised with 11 seconds to play, and then won the game in a shootout. The memory of that defeat still haunts England’s captain, Hollie Pearne-Webb.

She spoke before the match about how she was determined not to let a similar thing happen again. And this time her team held out while the crowd counted down the final seconds. As soon as they made it to zero, Laura Unsworth hit the ball out and the celebrations began.

Or they did for everyone except Pearne-Webb, who made a point of going off to shake hands with every single Australian coach and player before her team dragged her away to join in with their singing and dancing. The team had not won a medal at home since the 2015 European Championship.

This one was all the sweeter for the memory of the players’ experience at the Tokyo Olympics last year, when the GB team that won bronze were not able to celebrate with their friends and families because none of them were allowed to travel. That GB team will be back together soon, one eye on the next Olympics in Paris, and even greater glory. 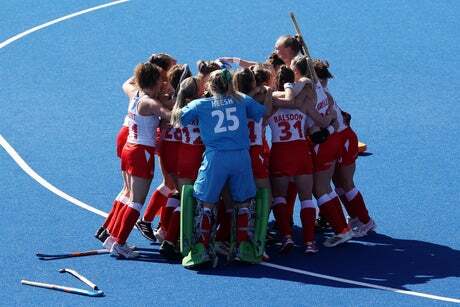 Evening Standard
From analysis to the latest developments in health, read the most diverse news in one place.
England claim first Commonwealth Games hockey gold with victory over Australia

Long before the Lionesses’ summer of glory, a raft of hockey players were already inspiring England’s women footballers to dream…

The Independent UK
Commonwealth Games 2022: Muir wins 1500m and hockey gold for England – as it happened

The Guardian - UK
One place to find news on any topic, from hundreds of sites.
England win first hockey gold but cricket and netball bids end in disappointment