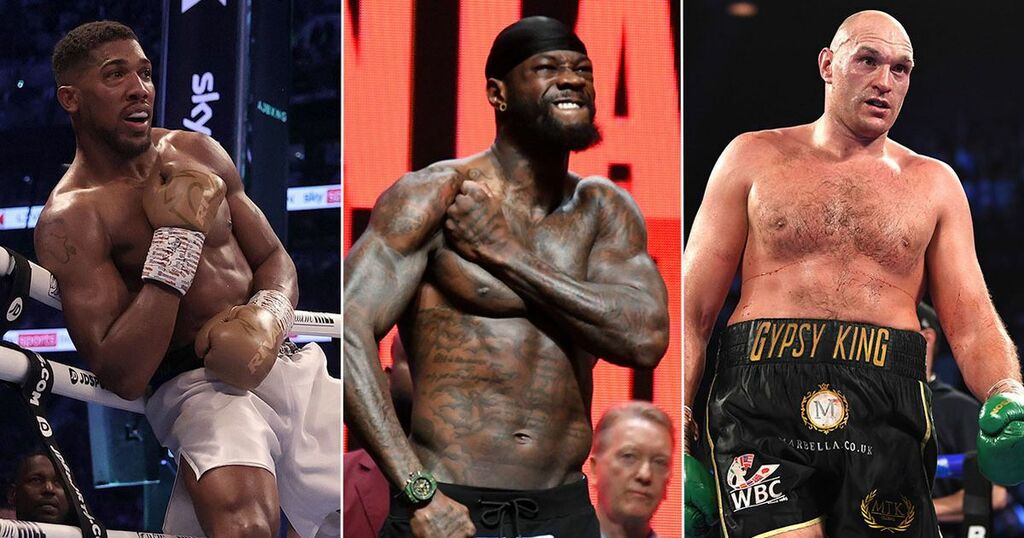 Tyson Fury will step into the ring with Deontay Wilder for the third time tonight - but the rivals' trilogy fight might never have happened.

In fact, British boxing might still be celebrating the crowning of an undisputed heavyweight world champion by now.

Because Fury was expected to walk to a different ring - in Saudi Arabia - on August 14 to meet fellow belt-holder Anthony Joshua.

But that fight fell apart at the 11th hour after Wilder took legal action to ensure he would have the chance to win back his title.

He will have that chance tonight as he attempts to right the wrongs of his rematch with Fury last year - and this is the story of how it all happened...

It was a case of promise delivered as Fury took his rematch to Wilder from the first bell just as he had vowed.

Having swapped Ben Davison for new trainer SugarHill Steward, Fury told everyone his gameplan would involve dominating the biggest puncher in the sport.

Few believed him until he had Wilder on the canvas twice before his corner tossed in the towel in the seventh round.

And so began, simultaneously, Fury's second reign as world champion and Wilder's blame game as he refused to accept responsibility for his first professional defeat.

What was not up for debate was that there would be a third fight between the rivals with the contract stipulating the loser had the right to activate a rematch clause which Wilder did just a week after his defeat.

The third fight was initially set for July 19 last year before the coronavirus pandemic began to play havoc with the sporting schedule.

Even when fight cards began to be held behind closed doors, there was no prospect of seeing Fury and Wilder share a ring under such conditions given the near $20million their second meeting generated from ticket sales.

Dates in October were offered before both sides moved towards an agreement to hold the fight on December 19.

The scheduling of the third instalment was further complicated by the college football season in America which had agreed a start date amid the ongoing pandemic.

This had a knock-on effect on the TV schedules and Fury and Wilder were forced back to the negotiating table. There was a suggestion that the fight could be held on Boxing Day while dates in January and February of this year were also floated.

But eventually Fury grew tired of the situation and pulled out of the fight. He said: "They asked me if I would agree to push it to December and I agreed.

Fury announced his intention to instead fight in London before Christmas with Agit Kabayel his most likely opponent.

Wilder, however, refused to accept Fury had the right to walk away from the fight and so began a mediation process in order to find a solution.

Meanwhile, Joshua had had his own scheduling issues with his mandatory title defence against Kubrat Pulev pushed back from June to December.

He eventually stopped the Bulgarian in the ninth round in front of 1,000 fans to retain his title and talk quickly turned to an undisputed showdown with Fury - even if Joshua appeared reluctant in his post-fight interview.

Fury, meanwhile, had been unable to agree a financial package to fight behind closed doors or in front of a small crowd and so faced the prospect of taking on Joshua having not fought for well over a year.

Talk raged about finally crowning a single heavyweight world champion - but behind the scenes Wilder was stepping up his efforts to force Fury into a third fight.

His team called in a judge to arbitrate and come to a decision either way but in the meantime, Joshua's promoter Eddie Hearn announced a two-fight deal had been agreed in principle that would see Fury take on Joshua this summer.

"We'd like to get a site deal confirmed in the next month," Hearn said last March. "The hard part is always getting everybody to put pen to paper. But this was a major effort from all parties to get this over the line. You had rival promoters, rival networks and rival fighters."

Hearn might have a promised a location for the mega-fight by April but negotiations rumbled on without a resolution - and all the while judge Daniel Weinstein was still to rule over Wilder's complaint.

Saudi Arabia had long been the frontrunner to host Joshua vs Fury and by May Fury announced the fight was agreed for August 14 with both Brits set to earn as much as $75million in the richest fight in heavyweight history.

"He told me this fight is 100 per cent on," Fury tweeted of his conversation with a Saudi official. "I cannot wait, repeat, cannot wait, to smash Anthony Joshua on the biggest stage of all time. This is going to be the biggest sporting event ever to grace the planet Earth."

Within days of Fury's announcement however, Weinstein ruled that Wilder was entitled to a third fight with Fury.

He ruled against Fury and his team who claimed the rematch clause had expired - and Fury's clash with Joshua was effectively dead in the water.

Fury's promoter Bob Arum had expected a worst-case scenario of having to pay Wilder 'step-aside money' but Weinstein dismissed that hope.

"The value of the opportunity to regain the heavyweight championship while Deontay Wilder still has the ability to do so cannot be measured or compensated for in money damages," he wrote in his judgement.

A deal was quickly done to hold Fury vs Wilder 3 on July 24 in Las Vegas but then Brit then contracted Covid-19 and the fight was pushed back until October.

Meanwhile, Joshua was forced to accept a fight with mandatory challenge Oleksandr Usyk in order to hold on to his three titles - only to lose on points last month.

The collapse of Fury vs Joshua means we must continue to wait to crown the first undisputed heavyweight world champion since Lennox Lewis in 1999.

Joshua will rematch Usyk in the first few months of next year while Fury, assuming he beats Wilder tonight, will be ordered to take on Dillian Whyte - if he beats Otto Wallin in a fortnight.

Should Joshua exact his revenge as he did on Andy Ruiz Jr, and Fury comes through unscathed, negotiations could resume for the all-British showdown next summer.

But as the last 20 months have shown, it would be unwise to bet on it.