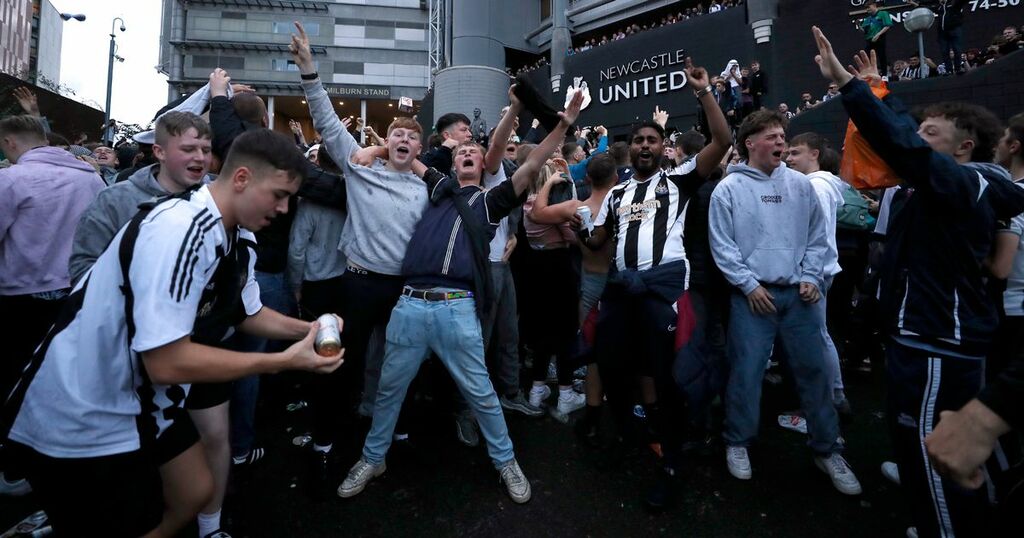 Fans celebrated with flares, hugged Newcastle’s new owners outside their hotel, and there was one question hanging in the air amid the joy.

Can Newcastle United be transformed into a global footballing super-power by their new mega-rich Saudi owners?

After all, the Public Investment Fund who now owns the club have £320bn behind them, the biggest wealth fund in the world.

Looking at the Premier League table - with Steve Bruce’s strugglers winless in seven games, second bottom and suffering an early relegation scare - it seems a far off proposition.

But that’s the long term prospect raised by the stunning £305m takeover.

Newcastle have the richest backers in the game. Champions League qualification and “winning trophies” was immediately announced as the long term target by deal broker Amanda Staveley.

The Saudi oil-rich rulers have been eyeing what’s been achieved at Abu Dhabi owned Man City for years, titles and trophies rolling in thanks to a £1bn investment, perhaps jealous at not having a skin in the game.

After building links with FIFA, and wanting to be influential in the world’s most popular sport, the Saudis have landed Newcastle United as their play-thing.

Staveley acknowledged it will take years of rebuilding to get Newcastle to the top, like it did at City who took three years to win a trophy and four to win the league. There will be mistakes and wasted money and a bumpy but exciting ride.

On the journey, despite the moral concerns over Saudis human rights record, there will be pride, passion and hope back at St James’ Park.

Newcastle are now beneficiaries of Gulf rivalry. Football is used as empire building by oil rich states. War by proxy.

The egos of leaders, nation-state power games and geopolitical rivalries, all played out on a football pitch.

Staveley has long wanted to position Newcastle as “The Club of the North”. The one everyone watches and wants to follow outside, and ultimately instead of the Manchester giants.

Ambition and striving is back on Tyneside after 14 years - and one decent season (Alan Pardew’s fifth placed finish) - under Mike Ashley.

An old Kevin Keegan quote - the playing and managerial legend treated so shoddily by the old regime - seemed appropriate as fans digested the news, and pondered a better future.

“The best day they (the fans) will have is when he (Ashley) sells the club…” and so it has proved.

Staveley has plans. She said: “Newcastle is an extraordinary football club. There is no club like it. There are no fans like Newcastle fans. We know the whole community wants a club they can be proud of, on the pitch and off. We appreciate the patience of the fans and everyone at the club.

“We are long term patient investors. We are in this for the long haul and we are here to invest. We have big ambitions, but it may take time to get where we want to.

“We are going to invest not just in players, but the club, the academy, and we want to see local kids making it to the first team. The talent is out there, we just need to find the kids and give them a leg up.

“The club will be welcoming and inclusive to all.

“The investors are patient long term investors who make decisions for the long term. Financial success goes hand in hand with football success. We will run the club responsibly. We are excited to get started.”

Asked if the plan was to win the Premier League within 5-10 years, Staveley replied: "Yes."