Pato O’Ward made the initial run, at a time when the wind was still, the ambient temperature was 77degF, and the track temperature was 86. The Mexican ace’s Arrow McLaren SP-Chevrolet delivered an average of 233.037mph, but it was eclipsed by the very next runner, Rinus VeeKay. The Ed Carpenter Racing-Chevy driver, who started fourth and third for his first two Indy 500s, delivered an opening lap of 234.702, and although his fourth lap dropped to 232.655mph, his average was a stout 233.655. That was the third fastest qualifying run in Indy 500 history.

Both VeeKay and O’Ward survived Felix Rosenqvist’s run, as the Swede’s car hit the hard-limiter (12,000rpm) down the front straight on his third lap, hurting his speed. Romain Grosjean was the first Honda driver to hit the track, and he was the first driver changing gear between fifth and sixth, and he delivered an average of 232.201mph.

An even higher-profile Indy 500 rookie went next, namely Chip Ganassi Racing-Honda’s Jimmie Johnson. The NASCAR legend ran a 233.165 on his opener, but on Lap 2 he got worryingly high on the exit of Turn 2. But he kept his foot in it and delivered a 232.398 average.

Takuma Sato’s Dale Coyne Racing-Honda with RWR, which turned the fastest lap in race trim on Tuesday and Thursday (with the aid of a tow) and in qualifying trim/turbo boost on Fast Friday, had an unspectacular run to an average of 232.196mph, and his peak lap unusually came on Lap 2.

Marco Andretti, qualifying for his 17th Indy 500 and 250th IndyCar race, was surprised on his out lap to find Sato running slow in Turn 3 instead of the deceleration lane. Sato’s qualifying run was subsequently invalidated by Race Control.

Remarkably, Andretti’s effort would get more frustrating yet, when his engine shut off temporarily on Lap 2, dropping him to 219mph on that lap, before refiring, allowing him to get up to 225mph on his third lap and 229mph on his fourth.

Tony Kanaan became the fastest Honda driver yet and fourth overall with an average of 232.625mph, but another Honda appeared to let go in the back of Colton Herta’s Andretti Autosport entry while he was on his warm-up lap. He suspected it was a dropped cylinder.

Stefan Wilson’s DragonSpeed/Cusick Motorsports-Chevy didn’t make his run in his assigned slot because of a gearing issue that required maintenance, so four-time polesitter Scott Dixon went out 15th. With sun coming out and track temperature now up to 100deg, he produced a 232.151mph average, which looked disappointing when teammate Palou delivered a 232.774mph to go fourth so far.

Four-time and defending Indy 500 winner Helio Castroneves had an alarming wobble at Turn 1 on his final lap, backed off, and dropped to last.

The track temp was up to 104 – 18 more than at the start of the session – when Scott McLaughlin became the first Team Penske-Chevrolet to run, and he lost 2.4mph over his run, the car looking very twitchy at Turn 2 as he delivered an average of 231.543mph.

Given the conditions, Ed Carpenter’s three 232s were strong, and he was clocking 241mph through the Turn 3 speedtrap, but a sudden wobble at Turn 3 on his final lap forced him to drop a gear and his final lap was only 231.299, dropping him to seventh so far.

2016 Indy winner Alexander Rossi had a messy Lap 3 – his fourth was faster – and finished outside the Top 12, so he would be hoping to run again, if the weather allowed. But his problems were put into context by a horrible run for Jack Harvey in the second Rahal Letterman Lanigan-Honda, who had to lift at all four corners on his second lap, and Sage Karam who had a big lift at Turn 3 on his third lap that dropped the Dreyer & Reinbold car down to 20th so far.

Juan Pablo Montoya had to run last instead of ninth, due to his #6 AMSP entry failing the pre-qualifying tech check, and he described his car as horrible.

After the opening runs, cars ran again later in the day until rain brought an early end – but not before Sato pushed his way in to the Top 12. 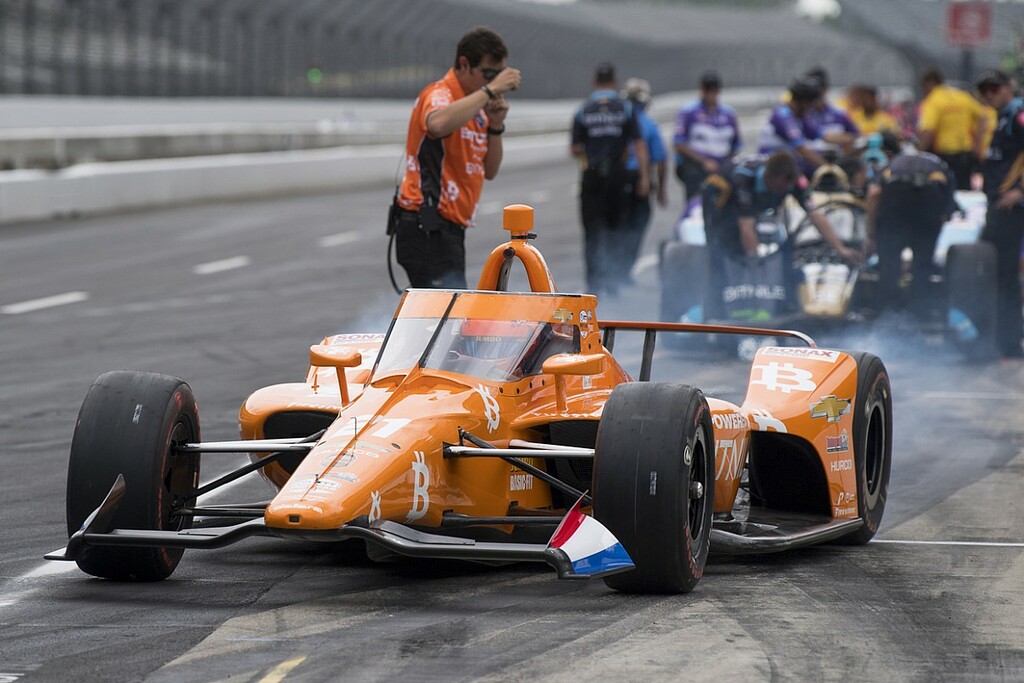 Autosport
One subscription that gives you access to news from hundreds of sites
Indy 500: Sato, Grosjean, Johnson into Top 12, P13-33 set