Rafale-M to demonstrate compatibility with Vikrant on shore based facility 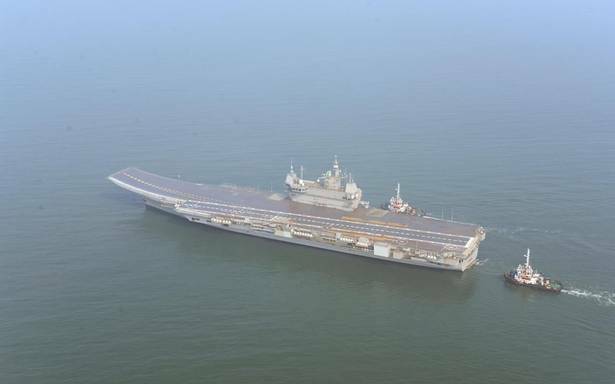 As the 40,000-tonne, indigenous aircraft carrier Vikrant sailed out from Kochi harbour on Sunday for the third phase of sea trials, beginning Monday, French aircraft maker Dassault Aviation will fly its Rafale-M fighter jet from the Indian Navy’s Shore Based Test Facility (SBTF) in Goa to demonstrate compatibility and suitability to operate from the carrier’s deck .

The Rafale-M arrived in Goa last Thursday and the demonstration starting from Monday is expected to go upto February 1, two Defence officials independently said. Boeing will also demonstrate the compatibility of its F/A-18 Super Hornet on the SBTF likely in March, it has been learnt.

These trials are part of demonstrations by aircraft manufacturers to showcase the compatibility of their aircraft to fly from Indian Navy’s aircraft carriers which use a ski-jump to launch aircraft, one official explained.

Both the Rafale-M and F/A-18 are originally designed to operate from carriers with a catapult launch mechanism. The carrier would thus require minor modifications to operate the aircraft, officials said.

A government-to-government agreement could be signed based on the aircraft selected to speed up the process, one of the official observed.

Boeing has taken a lead in the race having already demonstrated the ability of F/A-18 to take off from a similar shore based facility at Naval Air Station Patuxent river in Maryland, U.S. in December 2020.

However, each fighter brings certain advantages while having some limitations. For instance, while Rafale twin seat trainer is not carrier compatible its acquisition would mean commonality with the Indian Air Force which will soon complete inducting the 36 Rafale jets contracted in 2016. On the other hand, the F/A-18 is a much widely employed platform with a twin seater trainer and also has an electronic warfare version which might be of interest to the Navy. There is also the issue of the size of the aircraft and their fit on the carrier and its lifts which would also be factored in the final evaluation.

In 2017, the Navy had floated Request For Information (RFI) to procure 57 twin-engine carrier fighters which is now set to downsized to around 26, including few twin-seater trainer variants. The revision is in the backdrop of a new indigenous Twin Engine Carrier Based Deck Fighter (TEBDF) being designed and developed by the Defence Research and Development Organisation (DRDO) and Aeronautical Development Agency (ADA).

However, the procurement has now gained urgency as the Navy is short of aircraft to operate from both the carriers. The Vikrant is scheduled to be commissioned this August coinciding with 75 years of Independence, while the aviation trials and operationalisation will go into 2023.

INS Vikramaditya, the only carrier in service presently, operates the Mi9-29K aircraft. While 45 aircraft were originally contracted from Russia, their availability has been a major problem and won’t fill the requirements of both the carriers, Navy officials stated.

According to ADA, the first flight of the under-development, TEBDF is planned in 2026. It is envisaged as a twin-engine medium weight fighter, with an all up weight of 26 tonnes and wing folding and is meant to replace the Mig-29Ks in service, as reported by The Hindu earlier.

The Vikrant had sailed out for maiden trails in August 2021 and Phase-2 trials in October of that year. According to the Navy, in the current phase of sea trials, the carrier will “undertake complex manoeuvres to establish specific readings of how the ship performs in various conditions.”

Scientists from the Naval Science and Technological Laboratory, a DRDO laboratory based at Visakhapatnam would also be on board during the trials, the Navy said. “In addition, various sensor suites of the ship would also be tested.”