In 45 Minutes, USMNT Turns Its World Cup Qualifying Quest Around 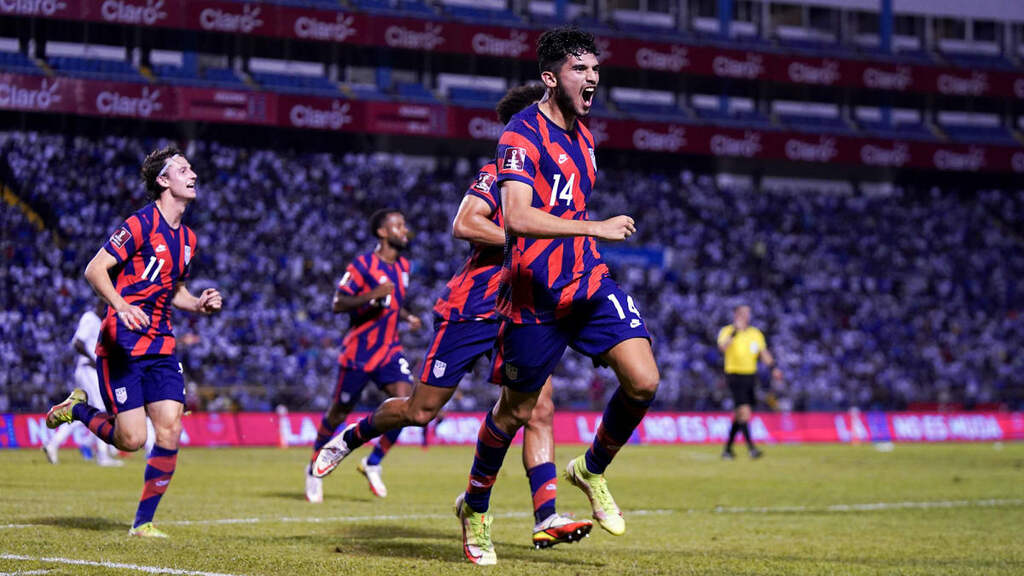 Gregg Berhalter got just about everything wrong at the beginning of Wednesday night’s pivotal World Cup qualifier in Honduras but one.

After starting two different center forwards in lackluster draws against El Salvador and Canada, the U.S. men's national team manager turned to 18-year-old FC Dallas prodigy Ricardo Pepi, a dual-national who just committed to the program in August. Pepi sat for the first two games, finally made his senior U.S. debut in San Pedro Sula and over the course of a remarkable second half, played a stunning and beguiling role in securing a critical victory and rescuing the desperate Americans’ qualifying campaign.

Pepi helped set up three goals and scored the winner as the visitors recovered from a shockingly bad first half to defeat Honduras, 4–1, at the Estadio Olímpico Metropolitano. It marked only the second time the U.S. won a qualifier after trailing at intermission (41 games), according to TruMedia, and the first was a 2013 match played after a World Cup berth had been sealed. The Americans’ second-half performance was as dominant as the first was impotent, and it left the U.S. with a 1-0-2 record after the opening Octagonal window and level with Canada and Panama for 2nd-4th in Concacaf’s final round.

The top three finishers will qualify directly for Qatar while the fourth will enter an intercontinental playoff. The U.S. will host Jamaica (0-2-1) and Costa Rica (0-1-2) and travel to Panama (1-0-2) next month. The Americans’ prospects and mood will be immeasurably brighter after Wednesday’s display. A grueling, trying camp ended on a historically high note.

“Regarding the negativity, we had a meeting and we talked about just tuning it out—focusing on what we’re doing. It’s completely understandable that fans aren’t excited about two points from two games but it wouldn’t have doomed the qualifying [if we’d lost Wednesday],” Berhalter said following the win. “Despite all this crap that happened in these last couple of days, the guys’ spirits were extremely high.”

They couldn’t have been that high at halftime, however. Just about everyone but Pepi was a disaster in the opening 45 minutes. He was more of a spectator, as the listless and confused U.S. played what likely was their worst half under Berhalter. Hoping to spark a side beset with absences and frustrated after two qualifying draws (and just one goal scored), Berhalter deployed the team in a 3-4-3 that represented a significant departure from its comfort zone.

Four players, including Pepi, were making their qualifying debuts and a couple others, Tyler Adams (right wingback instead of center midfield, his usual U.S. position) and Josh Sargent (right wing instead of center forward), were out of their best positions. The lack of chemistry, connection and recognition was crippling. The 3-4-3 did lead to more frequent switches of the ball, which was something Berhalter had been looking for, but Sargent was poor and Christian Pulisic, who was playing for the second time in four days after more than three weeks without a game following a positive COVID-19 diagnosis, often was overmatched by the swarming and physical Hondurans.

The U.S. didn’t manage a single shot on goal during the first half and fell behind in the 27th minute when John Brooks—who has fallen precipitously from his perch atop the center back depth chart—was turned badly in midfield. Honduras found space on its left behind Adams, and U.S. left wingback George Bello was unable to track midfielder Brayan Moya, who plays his club ball in Angola. Goalkeeper Matt Turner had no chance on Moya’s diving header, and the Americans had absolutely no chance in an alignment that was yielding so much space to Honduras and which was so awkward and unfamiliar.

Berhalter deserves criticism for his flawed approach, but he deserves credit for recognizing it was wrong and making the necessary changes. That sort of self awareness and humility isn’t a given. Berhalter said he urged his players to press and be more proactive and combative. The U.S. started the second half in a more customary 4-3-3 and Brooks, Sargent and Bello made way for Antonee Robinson, Sebastian Lletget and Brenden Aaronson. All three would help Pepi turn the tide.

“We needed to push up much quicker, condense the field, give our midfielders smaller space to be able to win balls. We wanted to be more aggressive high pressing them and we thought that would lead to some turnovers. And the subs did a great job all night,” Berhalter explained. “We needed to compete more. That was something I was disappointed with. When they scored, instead of seeing that reaction that we’re used to, I think their heads went down a little bit and we needed to embrace what type of game it was going to be.”

The U.S. drew level in just the 48th minute. Pepi started the move with some sturdy and diligent hold-up play, and Pulisic carried the ball through the heart of the Honduran defense before finding Lletget on the right. His cross struck Pepi and bounced to Robinson, who finished clearly inside the right post.

Pulisic left the match with an ankle injury on the hour mark and was replace by Cristian Roldan. About a dozen minutes later, Berhalter corrected one more mistake, shifting Adams back into center midfield for the overwhelmed James Sands and sending right back DeAndre Yedlin on to play right back. Two minutes later, Pepi lifted the U.S. into the lead, rising impressively above two defenders to head home a Yedlin cross. All four substitutes touched the ball before Pepi’s header—a symbol of the visitors’ second-half reorganization and resurgence.

Pepi held off a pair of Hondurans in the right channel and fed Aaronson for the easy 86th-minute backbreaker. Lletget then finished off the scoring in stoppage time after steering home a rebound created by a Pepi shot. The teenager was everywhere. His decisions were almost always spot on, his composure was that of an international veteran and his touch and technique were close to flawless. Pepi has 11 goals in 21 games for Dallas and on Wednesday he became the second-youngest U.S. player to appear in a World Cup qualifier (Pulisic set the record in 2016). The El Paso, Texas, native, who remains eligible to represent Mexico even after Wednesday’s game, appears to be more threatening and versatile than Sargent and more adept at finding ways to be goal dangerous in a variety of circumstances. Pepi very well may be the striker Berhalter has been looking for.

“He did a great job,” Berhalter said. “Worked tirelessly, competed against physical center backs, scored a really good goal and overall I think had a strong performance. For an 18-year old, it’s really impressive what he did.”

Pepi said he focused on his team and what it needed, which helped dilute any nerves. Concentrate on the collective, the spotlight dims and good things follow.

“I was prepared for the moment. I’ve been training, just preparing with the team,” Pepi said. “I just went out there to help the team the most I can. I ran. I ran on the field. I just wanted to win for the team. I gave my all to the team and personal things came. So I was very excited, very happy to help the team get the win.”

It’s hard to underestimate what Pepi’s emergence could mean for Berhalter, and it’s hard to underestimate what Wednesday’s win might mean for the program. Defeat in San Pedro Sula—especially if it came following a second half that resembled the first—would have destroyed the remaining momentum and optimism generated during a summer in which the Americans claimed the Concacaf Gold Cup and Nations League titles. It would’ve reignited the post-traumatic stress that followed World Cup elimination in Trinidad four years ago, and it would’ve set the public firmly against Berhalter three years into his tenure. Considering the time he spent building this team and the culture around it, not to mention the list of high-profile clubs that employ so many of his players, a winless September window could’ve undermined team morale, not to mention Berhalter’s mandate.

Instead, the U.S. will reconvene in early October having written a story of recovery and resilience. It lost Pulisic for the opener in El Salvador and for the last half hour on Wednesday. Incumbent starting goalie Zack Steffen missed all three games with back spasms and his own coronavirus diagnosis. Gio Reyna and Sergiño Dest left camp early with injuries, Tim Weah, Gyasi Zardes and several others were hurt and sidelined the entire window. The players based in Europe still aren’t midseason fit. And, sensationally, midfield anchor Weston McKennie was omitted from Sunday’s match against Canada and then dismissed altogether for a breach of team rules in Nashville.

Combine those hurdles and distractions with the travel, quick turnarounds and typical Concacaf headaches, not to mention the fresh-faced squad’s general lack of qualifying seasoning (16 players made their qualifying debut this month), and Wednesday’s win and the five cumulative points represent a respectable return. More importantly, they should elicit a significant sigh of relief for a team that needed one.

“We did a lot of talking before the first game about it being a nine-point week and it was really important, and I think that’s great to have high expectations. Everyone wants to win games, right? But the other side of it is, it’s just talk. And then you have to go out and do it, and it’s very difficult to do,” Berhalter acknowledged.

“We needed to give these guys that experience. They needed to see what these games are like, because they’re completely different games,” he continued. “They’re wars. You have teams and countries that are desperate to get wins to get in the World Cup, and it’s a different animal than we were used to. I think this whole window was great for this group. We really needed that in terms of the eye-opening of what this experience actually is. To cap it off with a win was important … and also to come back in the way we did.”