Immigration groups on high alert as they await DeSantis’ next flight

TALLAHASSEE, Fla. — GOP Gov. Ron DeSantis’ refusal to give advance notice before flying migrants to cities is causing chaos among immigrant groups and states trying to anticipate where his next flight will land.

Without a heads up, they are left scrambling — with just hours to help migrants find shelter, food and legal guidance. When DeSantis sent asylum seekers to Martha’s Vineyard with little notice, residents were forced to rely on Spanish-speaking high school students to translate and dozens of migrants spent the night in a church, the best shelter available at the time.

Even the White House this week was rushing to coordinate with Delaware officials after a flight was expected to land in President Joe Biden’s home state. Texas GOP Gov. Greg Abbott had previously send several busloads of migrants to Vice President Kamala Harris’ residence at the Naval Observatory.

Many of those relief groups are now collaborating and preparing for the next plane of migrants, which DeSantis has promised to send. They’ve built upon pre-existing informal networks of immigration, legal and advocacy organizations throughout the U.S. to rapidly deploy services once they get news of the next flight.

“There has been the creation of this sort of national infrastructure so there can be help waiting, whether they are coming to the south or going to cities across the country,” Luis Mata, the Tennessee Immigrant &amp; Refugee Rights Coalition’s policy director, said during an interview.

On Tuesday, humanitarian and aid organizations — as well as the White House and state officials — hurriedly organize services after a flight from Texas was scheduled to land near Rehoboth, the summer vacation spot on the Delaware coast where President Joe Biden has a home and regularly visits. The flight was eventually re-routed to Nashville, Tennessee and then to a small airport in Teterboro, New Jersey but apparently wasn’t transporting migrants.

“Staff communicated with friends and colleagues in New Jersey to give them information that they could be headed your way and to get ready,” Mata, who is based in Tennessee, said.

The national network of groups offering resources for migrants has long been in place. But they have bulked up recently after DeSantis’ Martha’s Vineyard stunt and as Texas GOP Gov. Greg Abbott continues to bus thousands of migrants from the southern border to cities like NYC and Washington. Both DeSantis and Abbott are running for reelection this year. Democrats, including California Gov. Gavin Newsom, have pressed the Justice Department to investigate DeSantis over the flights and a sheriff in Texas also said he opened a probe into the Florida governor.

The move by these groups to strengthen coordination and increase services speaks to the confusion and disorder DeSantis and Abbott’s migrant transports are causing. Chicago, NYC and Washington, D.C. are struggling to handle the influx of migrants flowing into their cities.

But DeSantis isn’t backing down. During a press conference in Miami on Thursday, the Florida governor denied he would have avoided such a national backlash against the flights if he would have given advance notice.

“Absolutely not,” DeSantis replied when asked.

DeSantis has defended the transports despite Florida not being a border state by claiming that the migrants in Texas have indicated they want to go to Florida.

He has promised to continue flying migrants, using $12 million in state funds set aside by the Republican-controlled Legislation. Florida paid $615,000 to a vendor, Vertol Systems Company, Inc., to transport migrants to Martha’s Vineyard. The state made a $950,000 payment to the same company on Monday but it remains unclear if and when the carrier will transport more migrants.

Vertol Systems, an Oregon-based company with operations in Destin, Fla. that has done millions of dollars in contract work for the Department of Defense, has not responded to requests seeking comment about its role in the program.

Immigration groups across the country have anticipated DeSantis would continue to surprise jurisdictions with migrants and have highlighted the scramble in Delaware to show that they can react in real time.

“As soon as we got word of a possible plane of migrants arriving in New Jersey, we organized to meet them at the airport to provide as many resources as we could,” said Michelle Ancil, the communications coordinator for the New Jersey Alliance for Immigrant Justice, the group that was contacted by the Nashville-based group on Tuesday.

Groups in other Democratic-led states are also preparing to receive migrants from the Texas border. In Illinois, Democratic Gov. JB Pritzker had issued a disaster proclamation that will free up more resources for a potential wave of migrants.

Charlie Crist, the Democratic nominee for governor who is challenging DeSantis, has like many Democrats criticized DeSantis’ transports as a political stunt.

"He should be held accountable by the media and the courts – but no one should fall for this shameful trick,” he said in an interview. 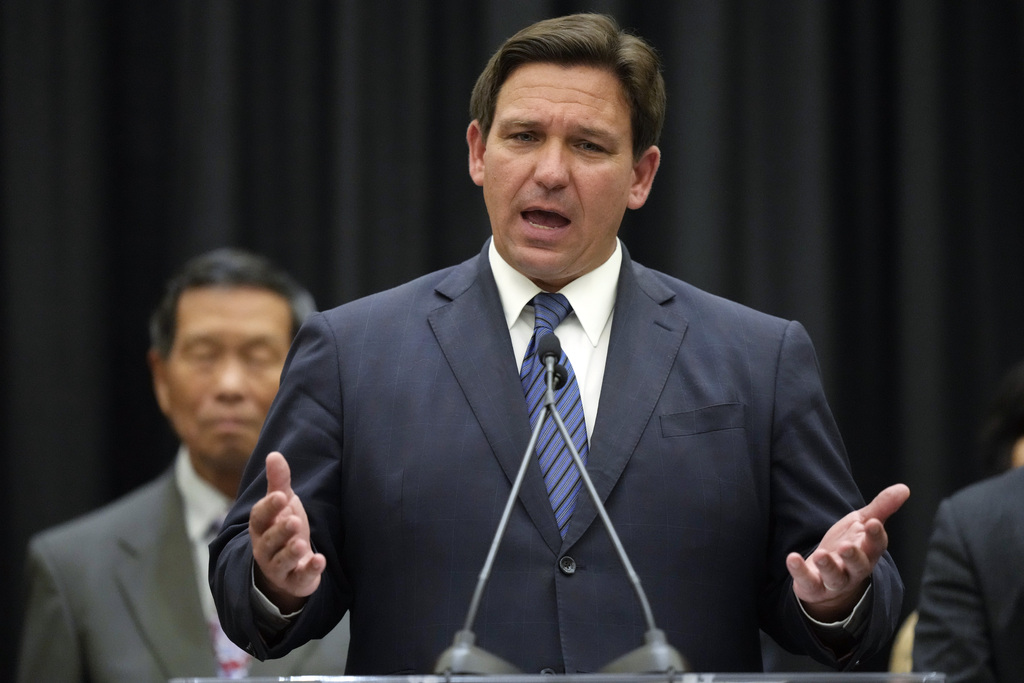 The Independent UK
One subscription that gives you access to news from hundreds of sites
Ron DeSantis chartered migrant flights from GOP donor, report finds

An aviation company hired by the administration donated thousands of dollars to Republican causes, including the governor’s campaign and a…