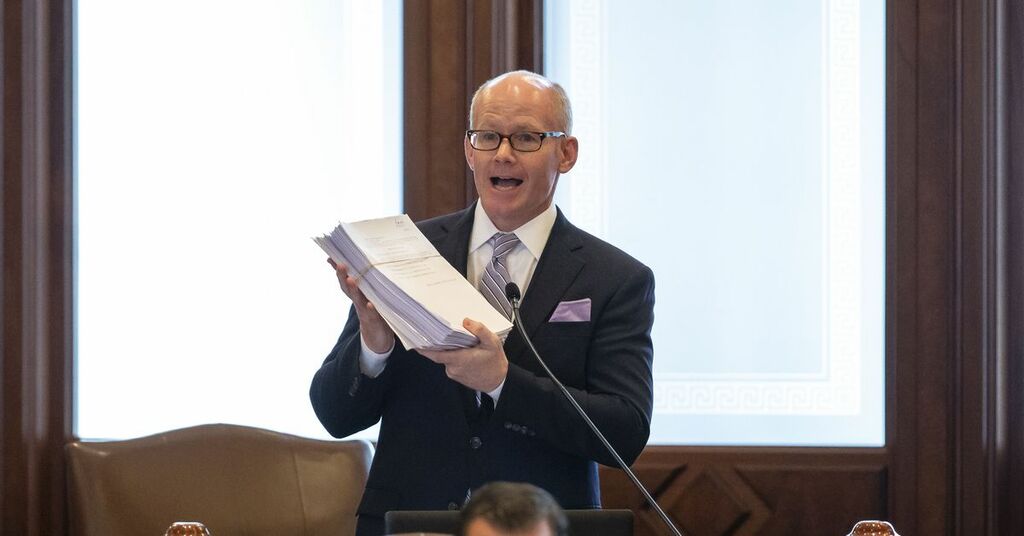 The Illinois Senate carried a massive piece of energy legislation over the finish line Monday, sending the bill to Gov. J.B. Pritzker’s desk just in time to avoid the shuttering of an Exelon nuclear plant.

In a 37 to 17 vote — with three senators voting present — the Senate passed the legislation, which Pritzker said he plans to sign “as soon as possible.”

A spokesman for Exelon Generation, which oversees the nuclear plants, said in a statement the energy company plans to refuel its Byron and Dresden nuclear plants “as a result of the action taken by the Illinois legislature to enact a comprehensive energy bill.”

“Once the legislation is signed into law, Exelon Generation will move to immediately fill hundreds of vacant positions and resume capital projects required for long-term operation,” the spokesman said.

The company also plans to alert the Nuclear Regulatory Commission and a regional energy transmission organization of its plans.

The legislation heading to Pritzker sets the state on a path to 100% clean energy by 2050 through a mix of providing subsidies to nuclear plants and setting closure timelines for coal and natural gas firing facilities.

Ratepayers are likely to see their monthly bills increase — but by how much depends on whom you ask.

Pritzker said in a statement shortly after the bill’s passage the state is “making history by setting aggressive standards for a 100 percent clean energy future.

“After years of debate and discussion, science has prevailed, and we are charting a new future that works to mitigate the impacts of climate change here in Illinois,” the governor said. “I look forward to signing this historic measure into law as soon as possible, because our planet and the people of Illinois ought not wait any longer.”

Before the Senate’s vote, Republicans in the state’s upper legislative chamber aired their grievances with the bill and grilled the chief sponsor, state Sen. Michael Hastings, D-Tinley Park.

State Sen. Terri Bryant, R-Murphysboro, said “downstate Illinois was completely forgotten and ignored in this bill — as is often the case here in Springfield.

“It’s pretty typical of the majority party continuing to do that to downstate,” Bryant said. “We need assistance, and recovery and support, we need leaders who will lift up our job creators, not add to the burdens with energy rate increases, and I submit that this bill is a blatant attack on small businesses, and a disservice to downstate Illinois.”

Others, including state Sen. Chapin Rose, R-Mahomet, took issue with the inclusion of eminent domain for an energy transmission line in the legislation that would allow “private, for-profit companies ... the right to put up new power lines across my constituents’ homes.”

Hastings said the legislation will allow the Illinois Commerce Commission to delegate eminent domain authority for a transmission line — which he said will decrease energy costs. Landowners must be given “just compensation” and there must be three public meetings, with sufficient notice, to inform landowners ahead of any filings for that line, Hastings said.

The Tinley Park Democrat also said claims that nothing was done to help downstate Illinois were “inaccurate and wrong.”

The cost of the legislation for ratepayers varies.

State Rep. Marcus Evans, D-Chicago, said in the House last week that residential ratepayers would pay about $3 more a month. Hastings said that figure was likely closer to $3.55. But AARP released a study that claims the figure might be closer to $15.

Included in the bill is a requirement for Exelon to apply for any federal relief that’s available — there are several pending proposals in Washington, D.C. that would help Exelon “essentially recover, on behalf of the ratepayers, all the dollars that are being provided through the nuclear support program that we passed today,” state Sen. Bill Cunningham, D-Chicago, said at a news conference following the passage of the legislation.

“We are hopeful, depending on action in Washington, that ratepayers in Illinois, any support that is offered from them to Exelon will be paid back in future years,” Cunningham said, adding that will “reduce the pressure on ratepayers.”

Stakeholders applauded the Senate’s passage of the bill after a lengthy negotiation process.

Jen Walling, the executive director of the Illinois Environmental Council, said in a statement the “legacy of fossil fuels in the power sector poisoning our communities and driving the climate crisis will officially come to an end in 2045.

“There is still more work to do, but today we celebrate this leap forward in creating a more equitable and thriving environment for generations to come,” Walling said.

Joe Duffy, the executive director of labor coalition Climate Jobs Illinois, also lauded the Senate’s passage of the bill for setting “the strongest clean energy labor standards in the country” and promising “to raise the bar for other states seeking to enact new labor and employment policies for building and maintaining clean energy developments.”

Along with providing nearly $700 million over five years to Exelon nuclear plants, the legislation requires municipal coal firing plants such as Prairie State and Springfield’s City Water, Light and Power to cut their emissions by 45% by 2035 before closing 10 years later unless they can generate green hydrogen or use similar technology to get to zero carbon emissions.

The bill ends the controversial formula rate system and transitions to a “performance-based” system that will be overseen by the Illinois Commerce Commission for utilities that serve more than 500,000 customers.