'If he’s not on a lead, he’s a dot in the distance' - what it's like living with a three-legged dog 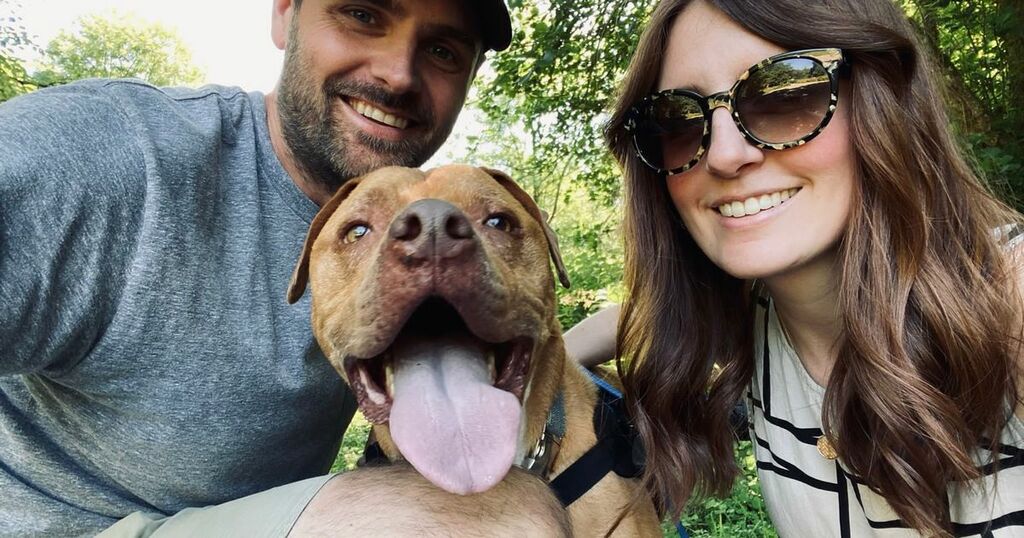 The owners of a three-legged dog have revealed what life is really like for them and why buying their pet a wheelchair was the best decision they made.

A stray female dog was found abandoned inside a garage in Cardiff back in 2013 and heavily pregnant.

The American Bulldog was taken in by Cardiff Dogs Home where she gave birth to six cross breeds - including Odie.

At the time, Hana Lewis and her husband Anders Nilsson, now both 37, were volunteers at Cardiff Dogs Home, and fell in love with the female dog, Emily.

Read more: Sausage dog climbs to top of Snowdon in one day and people can't believe it

Unfortunately, they were not lucky enough to give a home to her when she was adopted but one of her puppies would eventually come back into the centre's care after his new owner could no longer look after him.

Cardiff Dogs Home rang Hana saying: “A puppy has come back in and you’ve got to have him! We need somebody that we know and can trust.”

That puppy was Odie, and at five months he settled with Hana, a project manager in film exhibition and her husband Anders in north Cardiff.

For several years, Odie was full of energy and adored family life.

He would walk for hours and even climb Pen y Fan, the tallest mountain in the UK south of Snowdonia.

Then in January 2020, Hana was given a dreaded diagnosis for Odie. He had Osteosarcoma - an aggressive bone cancer.

The prognosis was that he had just six months to live.

One of his back legs was amputated the following week and he started chemotherapy.

Hana said: “He did well, bounced back so quickly. He was going out on walks and then suddenly he went lame in the back leg.

“The vets said he’s probably just adapting. Even they didn’t think it was major cause for concern.

“That’s when they did a scan and found out he had ruptured the ligament.”

To add salt into the wound, not long after he tore the cruciate ligament in his remaining back leg.

Odie was all but lame with an impending prognosis and surgery was not an option, with vets saying it could lead to a higher chance of being put down in the near future.

However he had two very loving owners who would do absolutely anything for him.

Research led them to Walkin’ Pets , a retailer of walking aids for dogs, including wheelchairs.

Hana ordered Odie a wheelchair and it changed his life for the better.

Hana explained, “I don’t think there was an alternative. If we hadn’t have done that I don’t see how he would have got through. Dogs live to walk.

“The first time we tried to take him out in it he just stood still. He didn’t know what to do. He cried and whined in the chair.

“It only took a couple of times and he was away. Now, you take him to the park entrance and he whizzes around the corner.

“Sometimes he gets in the chair and you can’t catch him! If he’s not on the lead he’s a dot in the distance to me and I’m running after him.”

One problem with the wheelchair is it can flip if going at speed. Odie once chased a French Bulldog down a hole, flipping his chair upside down.

There are loops for a lead, and it is fully adjustable to suit the height and weight of your dog.

One negative which Hana has found since Odie has been in a wheelchair is the ogling and pointing she receives but worse is the shouting from strangers demanding to know what happened.

Hana said: "If you see a dog with a leg missing in a wheelchair it’s like a battle scar.

“It’s quite traumatic to recount to six, seven people on every walk, ‘Oh he had cancer, he had his leg removed,’ it's hard work.”

Hana is quick to add that most people are friendly and smiley rather than nosy.

“It’s still your little family who you’re trying to protect. He’s my baby and I’ll do anything for him.”

Odie is currently in the running to be featured on a Walkin’ Pets handicapped calendar for 2022. You can vote for him by liking his Facebook picture here .

To get the latest newsletter from WalesOnline, click here