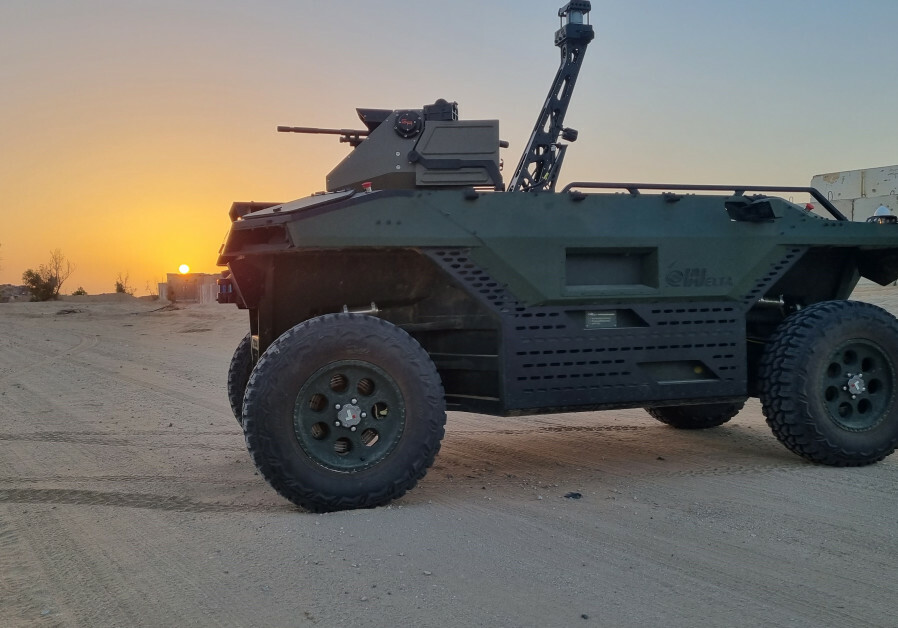 Israel Aerospace Industries has unveiled its latest unmanned land platform that can keep troops out of harm’s way during missions.

The REX MK II, unveiled at DSEI 2021 in London, is an unmanned land vehicle adapted to a range of ground missions with advanced maneuverability. It is autonomous with command-and-control capabilities and can also be operated by a single operator through wireless communication.

The multi-mission multi-purpose system supports combat troops in a variety of missions including intelligence gathering and logistical support, and can even help execute remote attacks against threats.

According to IAI, the REX MK II can carry munition supplies, critical medical equipment, water and food, as well as evacuating injured personnel on stretchers. It can also support additional missions based on troop needs.

The new hybrid-electric, all-wheel-drive platform is able to carry a 1.3-ton load. It has electro-optical sensors and radar as well as a 7.62 mm machine gun and a 0.50 cal heavy machine gun that can be operated remotely.

The REX MKII is the latest unmanned platform developed by IAI including the Jaguar, a platform that is currently being integrated into the Gaza Division.

The Jaguar is equipped with dozens of sensors, an automated driving system, and advanced fire capabilities. Based on a six-wheeled chassis, it is equipped with a 7.62mm MAG machine gun that can be operated remotely against suspicious objects or people both while stationary or on the move.

The Jaguar uses high-resolution cameras, dozens of sensors, transmitters, a remote-controlled PA system, and is powered by an electric motor that allows it to patrol the border fence with a low heat signature.

It also has the ability to transmit its precise location to a UAV to be destroyed from the air should it fall into enemy hands.

With IDF observers and commanders in full operational control, the robot can compute a route for itself and then drive itself to the destination. Using its advanced driving system, the Jaguar can also spot and bypass obstacles in its way.

Other unmanned platforms developed by IAI include the RobArc which uncovers and destroys ground level and subterranean explosive devices; the Robattle which is a robotic operational land platform with high maneuverability; and the RobDozer, an unmanned bulldozer that carries out complex military engineering in dangerous areas.

“The need to support ground forces in the field to carry out various missions while minimizing threats to soldiers’ lives is at the heart of our values here at Israel Aerospace Industries,” said the General Manager of IAI’s Land Division Zvika Yarom.

“This system is based on harnessing our decades-long experience with UAVs, to implement in the world of land vehicles. IAI’s unmanned land platforms are in use operating along Israel’s borders and in different fighting units as well as in other locations around the world. We are experiencing a rise in demand from clients for unmanned land platforms.”

The IDF in recent years has been incorporating more combat platforms based on autonomous and automatic maneuvering capabilities, artificial intelligence, hybrid propulsion and more.

Designed to play a lead role on the future battlefield, these platforms use artificial intelligence capabilities that enable full situational awareness and fast responses to enemy threats while drastically reducing the workload of the crew as well as the threats posed to troops.