‘I was at a bad place for a while’: Former SAS photographer Adam Dobby on his career and exhibition 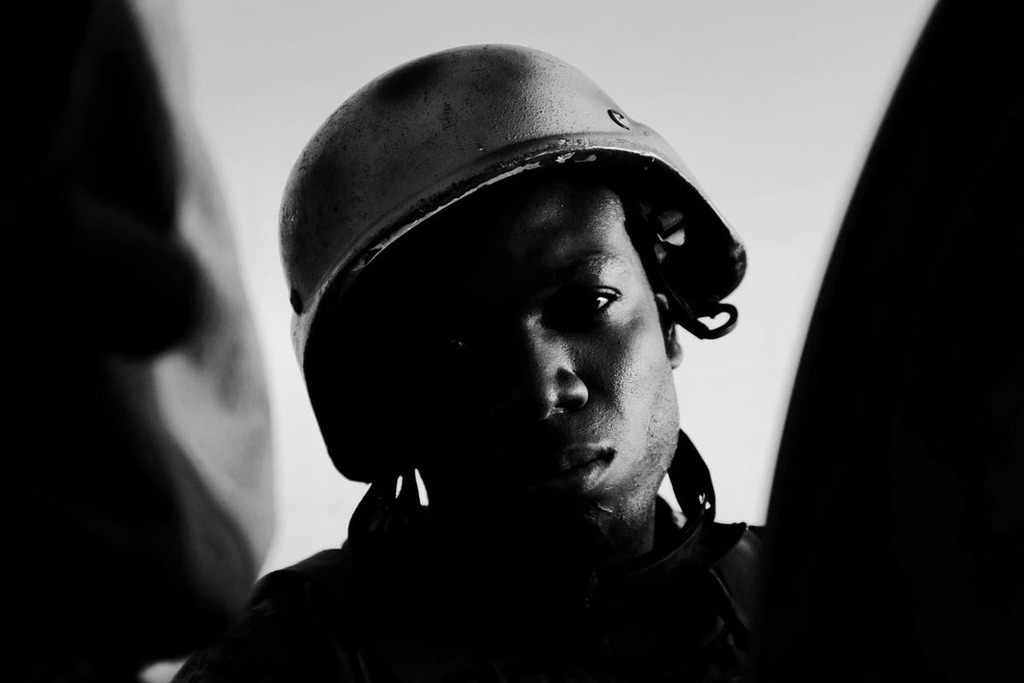 The art of focusing and shooting was honed by Adam Dobby while he was in the SAS.

This was not with the gun – although he had done plenty of that during his time in the service – but with the camera, carrying out surveillance operations.

Dobby, who had joined the army before his 17th birthday as an engineer, left after 12 years as a staff sergeant. He subsequently had a number of jobs related to his field, including in the City, before becoming a security consultant for international media companies.

While travelling with journalists in places of strife, Dobby started taking pictures of people living through violence and poverty and showing extraordinary courage and resilience in harrowing circumstances.

The former soldier’s photographs have been shown drawing praise at a gallery in Cheltenham, Gloucestershire and another exhibition, Created in Conflict, is taking place in London’s Mayfair this week.

Part of the proceeds from sales of photographs is due to go to the Sentinel programme of Special Air Services Regimental Association which offers support to former members facing problems.

Dobby himself had faced difficulties, in his personal and professional life, and says it was the backing of former comrades that helped him get through that period and drive him to organise his photographic project.

“I was at a bad place for a while,” he said. “My marriage had broken up and journalistic work dried up with Covid and travel constraints.

“I didn’t expect to be signing up for universal credit at the age of 49. Some friends from SAS found out and their help was of huge importance in getting me back on track.

“I went through therapy which I found very helpful and the support of former colleagues which was so important in getting myself back on track.

“I don’t think anyone can be immune from what they have experienced and talking about it really does help.”

Dobby, now 50, added: “ I also thought more about all those that we had met on the road going through such traumatic times and continuing to do so now.

“The photos I took try to show their lives and it was really good to see the reaction of those who came to see the show in Cheltenham. Many people were very kind with their compliments and I have sold quite a few which is rather good.

“The SAS were very encouraging all the way through. There is now, I think, there is an understanding in the armed forces that people who do need to can come forward with such issues can do so without embarrassment.”

Many of Dobby’s photos are about the plight of the dispossessed in the chaos of conflict. They were taken against the backdrop of episodes in recent history, in Syria, Iraq, Libya — families fleeing fighting; a child carefully carrying a doll’s house outside her own destroyed home: a woman with her children at a refugee camp with a drawing showing the carnage they had escaped, and the gates to sanctuary in the West shut firmly on their faces.

Dobby’s worldview had been shaped, to a certain extent, by his time in the SAS as well as subsequent work with the media.

The Special Forces pride themselves in being less hierarchical and giving members more freedom of thought and action than rest of the military. Journalism on the frontline, Dobby felt, also gave the opportunity to analyse and reflect on what was going on.

“Both, I think, tend to think outside the box and can make up their minds about things because they are the ones on the ground. In the SAS I felt privileged to be in a select team and loved the camaraderie”, he commented.

“But at times I felt we were being used as political tools, and I am really, really glad that I was out the Army by the time the second Iraq war came along”.

“I have been lucky enough to be with frontline journalists who have been brave, tough and thoughtful. I could see some similarities between them and my former colleagues in the army, There are shared experiences, witnessing distress and violence which are bound to affect you.”

The impact of personal and professional problems on those in the military has recently made the news with the suicide of Major General Matt Holmes, whose funeral took place on Wednesday. The former head of the Royal Marines had split from his wife, while his role of Commandant General had been curtailed amid claims and counter-claims about internal military politics.

Maj Gen Holmes, according to friends, had also raised deep concern about the hasty Western withdrawal from Afghanistan, a country where he had served and where he had many friends.

At the inquest in Winchester on Tuesday into the death, Hampshire coroner Jason Pegg said that Maj Gen Holmes had “concerns about his marriage and his service career”.

The scars, mental as well as physical, also stay with those who had served in the Special Forces. But they face the additional problem of often not being able talk about their experience on missions because they were secret and have remained so.

“This is certainly an issue, the guys feel they can’t sit in a group with other people they don’t know and open up about what they had gone through. This is much more of a difficulty with them than others in the armed forces”, said the secretary of the SAS Association, a veteran of the Regiment.

“We are not saying that people in the SAS can be more affected than others in the military, or the police or firefighters or indeed members of the public. But speaking about what happened, such an important part of addressing the issue, is simply not possible in so many cases. That’s one of the reasons we set up the Sentinel programme, so that those who need help can meet people from shared background”, he explained.

The secretary, who had spent 22 years in the SAS, held that although the stigma in coming forward to seek help was fading, there are still those who may still be reticent to do so .

“The problem, we get the impression, may be among direct entry officers who join from elsewhere, spend time in the Regiment, and then go back and may come back as a squadron commander. They maybe a little bit more reticent about coming forward with issues because, perhaps, they feel they need to prove themselves” he said “ but hopefully that too will change.”

Dobby has been asked to speak to pupils and students at schools and colleges and some have asked for his photographs to be put on display, among them at the Cheltenham Ladies College after the exhibition in the town.

“The work has proved inspirational for both staff and pupils, and the recent events in Afghanistan have reminded us once again of how much we still have to learn about some of the world’s most complex regions, where equal rights for men and women cannot be taken for granted”, said the principal Eve Jardine-Young

“Through having a collection of his poignant and powerful images, we have the potential to deepen our grasp at the human as well as the geopolitical level. We envisage using Adam’s photography alongside talks and related discussion sessions for students and interested parties beyond the immediate College community.”