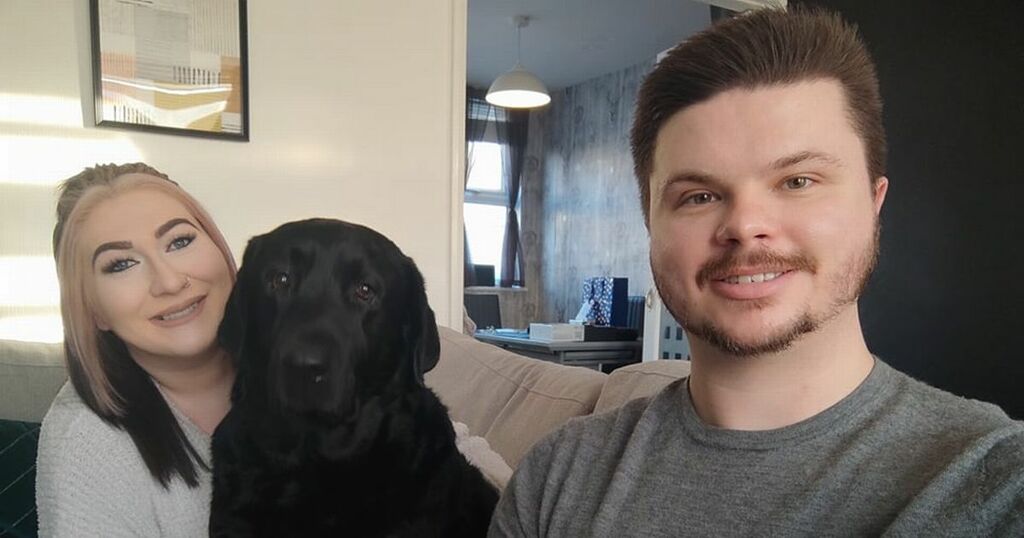 A young couple have decided to bring the birth of their child forward so the dad who was diagnosed with cancer can be there for the birth.

Liam Burton and Kate Murphy’s world was rocked after Liam was diagnosed with bowel cancer a week before Christmas.

The pair from Leigh have been together for three years and are expecting their first child, Wayne to be born early this year.

READ MORE: Doormen refuse mum entry into bar for 'being too ugly' - then attack her to hide what they had done

With Liam, 30, set to start a period of treatment to battle the cancer, Kate made the brave decision to bring forward the birth of their child so Liam can be there to welcome Wayne into the world.

The couple spoke to the MEN about their ordeal which began last April when Liam started showing symptoms.

Speaking to the Manchester Evening News Kate, 24, said: “Last April Liam had symptoms of bowel cancer like going to the toilet quite frequently and when he went there was quite a bit of blood.

“So I booked him a doctors appointment in April where he did sample and the doctor said they referred him to a colonoscopy team, which didn’t seem to be the case because there was nobody getting back in touch and they’re going to blame Covid for that."

After going to the GP, Kate said it took almost a year for the young family to get a diagnosis after being placed on a 365 day waiting list despite Liam's health worsening.

In December they got the news at the ' worst' time possible with a baby around the corner.

Kate said: “Finally we got a call a month ago asking Liam to go in for a colonoscopy because they had only got round to looking at his notes, eight months later.

“Once we had the colonoscopy they said they’d found a growth and it was around 6 centimetres at the time,

"He was sent for an MRI and CT scan and a week after that we went into Wrightington Hospital and we were told he had bowel cancer and it was a stage three tumour.

“Everything has happened really quickly since then, we’ve had a referral, and we’ve just been told about his radiotherapy and chemotherapy surgery.

“It’s been in the back of our mind but we were thinking it was more of a food intolerance, I was angry at the GPs and obviously I cried when they said it,

“All this radiotherapy and chemotherapy could have been done before the baby was here and now it’s the worst timing possible, we were left for eight months."

After looking at the time between Liam's treatment and the due date for baby Wayne, Kate said she thought it best to push the birth forward by c-section so he can be there for the birth.

She said: “It was a decision on my half, it was not something Liam told me to do, it took us a couple of days to realise what we’ve been told and then once I finally had a chance to look ay the dates, and we learned about side effects.

"I just thought I’d ask for a c-section because there was a chance he was going to be too unwell because of the chemo cycle and I wouldn’t want him in a hospital.

“Because I’ve not had a child before they'd prefer I have a natural birth, but with the circumstances they all agree and are going the extra mile to help us out really."

Liam and Kate hope their story can inspire young men to get regular checks as rates of bowel cancer continues to rise among young adults.

Liam said: “Once we got the results, I’ve been reading more into it and the study in the last 15 years has shown that the percentage of men under the age of 50 with bowel and colon cancer has been increasing by one percent every year.

“So it’s become more of a common thing, but the only problem is that at the moment the screening for that is only for over 50s, so for younger men they’re not finding it until it’s too late.

“So hopefully with the rise of diagnoses men can get screened at a younger age.”

Kate is a self employed dog groomer and she has taken maternity leave early to support Liam which has been a financial burden to the pair.

To help with finances, Liam’s younger brother, Robbie, 25, will be climbing three peaks in three days to raise money for the couple.

Robbie said "When I heard the news about Liam's diagnosis it was all kind of numb for me.

"After Christmas it all hit me and that's when I started thinking about stuff, I was having a few restless nights thinking 'what can I do'

"I knew the baby was due pretty much the same time as the chemo so I just thought what better way to help.?"

Robbie has set up a JustGiving which can be found here.

You can keep up with Liam's journey on Instagram by following his account which is liamburton or through the hashtag #burtonsbowelbattle.