Hunter vax rates up to 15% behind state 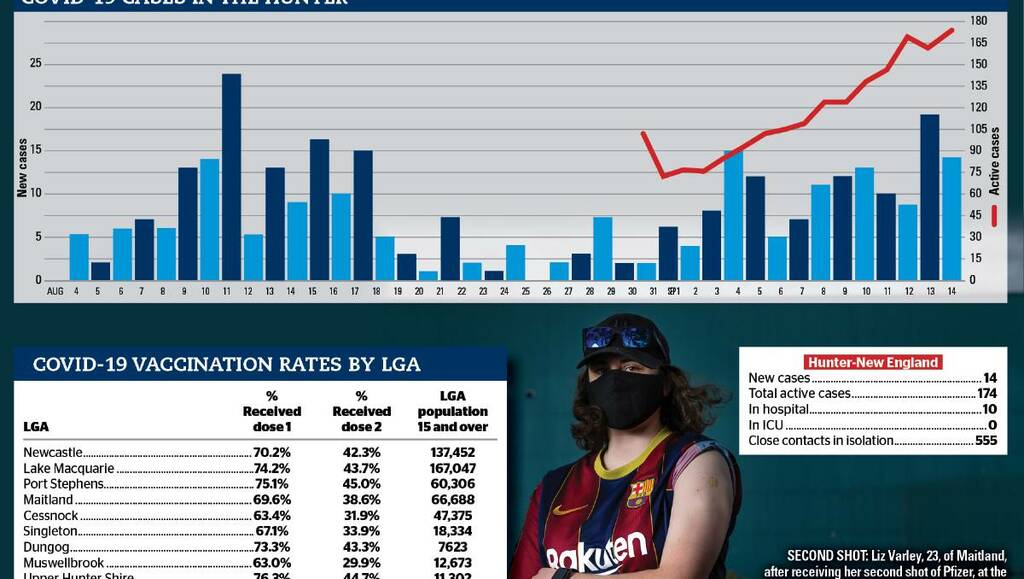 Vaccination rates in Muswellbrook and Cessnock are among the state's lowest, and every Hunter council area has vaccine coverage below the NSW average.

Latest federal government figures up to September 12 show Muswellbrook and Narrabri had double-dose vaccination rates under 30 per cent, more than 15 points below the state average.

Muswellbrook's first-dose rate was just 63 per cent but has grown by nine percentage points in the past week.

Deputy Premier John Barilaro said the government was examining how to improve the vaccine rollout.

"I think we're at the stage where the booking system is not where you need to be," he said. "Having the ability to have walk-in clinics available seven days a week, I think, is the key in those areas."

He said he wanted people to receive more information about where and when more Pfizer doses would become available as supply lifted in coming weeks.

In Cessnock local government area, 63.4 per cent of people aged 16 and over had received one dose and 31.9 per cent had received both. The Singleton double-dose rate was 33.9 per cent.

Across NSW, the single-dose rate was 78.8 per cent and the double-dose rate 46.5 per cent. Vaccine coverage is highest in Sydney, where the federal government injected an extra 530,000 Pfizer doses in response to high case numbers.

Only Upper Hunter and Port Stephens are close to the state average in the Hunter.

"We know when you have an outbreak people go and get vaccinated," he said.

Mr Layzell has written to Mr Barilaro asking for Muswellbrook, Singleton, Upper Hunter and Dungog LGAs to be freed from stay-at-home orders on Saturday.

He said images of Sydneysiders sun-baking at Bondi last weekend had heightened his constituents' frustration at being locked down.

"The fuel that went on the fire was those photos from the weekend, and I realised that it was only a matter of time before we get similar photos from Merewether and Bar Beach," he said.

"It's probably 100 per cent legal [but] people are looking at those rules going, 'Look at what happened down there. We're not allowed to go to the park. Dave, how can that be happening?'

"One of the things that upsets me the most about the pandemic is seeing community fight community.

"I've seen it now fighting over Pfizer and people thinking we've got bags of vaccinations we give to those who vote for us. It's not happening like that, but this is the tension in the community."

He argued the four LGAs had recorded very low case numbers and the risk of further transmission was low.

Singleton recorded two of the Hunter's 14 new cases on Tuesday, but Mr Layzell said neither had been infectious in the community as both had been in isolation as close contacts of a previous case.

He compared the four LGAs with MidCoast, which Mr Barilaro included on the list of LGAs removed from lockdown last weekend at the 11th hour after assessing that the area's then sole case, in Booral, was not a threat to the community.

Seven of the new Hunter cases were infectious in the community.

Five were in Mayfield, two in Wangi Wangi and one in North Lambton, Wallsend, Raymond Terrace, Tenambit and Wyee Point.