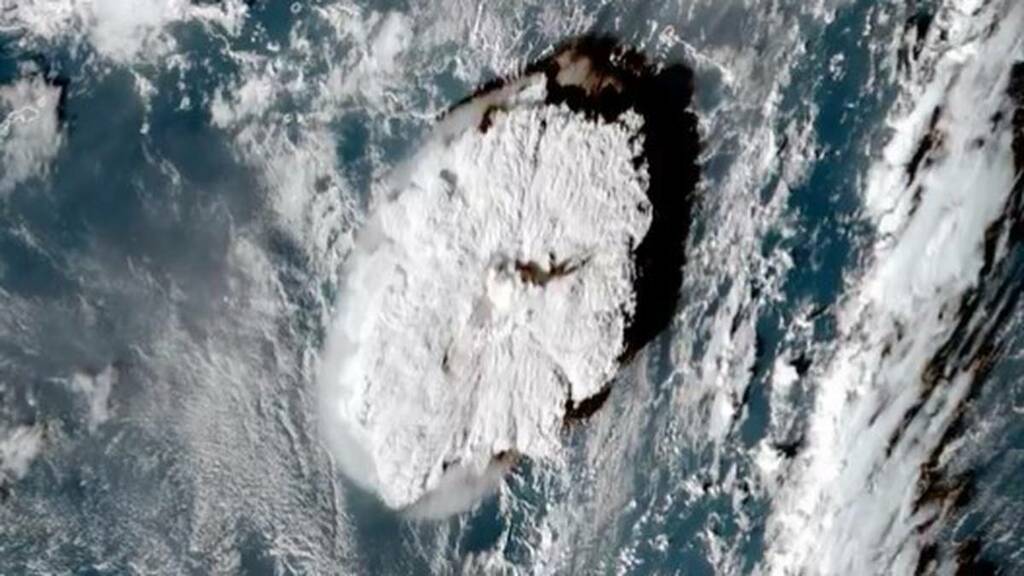 Residents have described the moment the sea was sucked out of a popular North Island coastal settlement following the massive undersea volcano eruption in Tonga.

The popular Tutukaka coast in Northland has been heavily impacted by surging seas caused by the eruption, with campers being evacuated and boats being damaged after losing their moorings at the local marina.

"Tutukaka marina appears to have been really impacted by these tsunami surges - police have been evacuating all boaties and there have been reports of significant damage and boats getting dragged out off their moorings on the receding surges," tweeted Rebecca Hendl-Smith.

"Waves have been building at Matapouri in Northland and this evening the water sucked out of half the bay, followed by massive surges up into the estuary… pretty scary and I reckon most of us on the Sandspit evacuated soon after that."

"There has been damage to a number of boats and marina structures, with people who live on their boats within the marina evacuated as a precaution. Elsewhere in Northland, a number of coastal campgrounds were evacuated or campers relocated due to incoming waves."

"It's a challenge to distinguish the effects of the storm surge generated by Cyclone Cody, from currents/surges resulting from the volcanic eruption in Tonga, but our best assessment at this stage is that the two combined in a number of specific places, with local landforms also playing a part.

"We'd like to thank all of the Northland emergency services and agencies, community members, iwi and businesses who have provided assistance tonight and will be continuing to do so over the coming days.

"We remind people to continue to take great care around beachfronts, estuaries etc - following tsunami events in the past, unpredictable effects have continued for a number of days, and of course we still have large waves coming in from Cyclone Cody.

"It's not a time for taking chances."

Earlier - as Tongan locals urged others to "pray" for them after the massive underwater eruption - New Zealand's National Emergency Management Agency issued a warning of potential impact along our coastline.

Tongans have been urged to head to high land after the latest eruption of Hunga-Tonga-Hunga-Ha'apai; with a tsunami warning being issued shortly before 6pm NZT.

Since then waves of up to 1.5m have surged onshore; with footage shared on social media showing motorists driving away from the raging waves, at least one parked car being swept away and families stuck in church halls near the coastline.

Civil Defence officials stated: "We expect New Zealand coastal areas on the north and east coast of the North Island and the Chatham Islands to experience strong and unusual currents and unpredictable surges at the shore."

The agency said: "Strong currents and surges can injure and drown people. There is a danger to swimmers, surfers, people fishing, small boats and anyone in or near the water close to shore.

"People in or near the sea should move out of the water, off beaches and shore areas and away from harbours, rivers and estuaries until at least 04:00am NZDT Sunday 16 January 2022.

"Strong and unusual currents and unpredictable surges will continue for several hours and the threat must be regarded as real until this Advisory is cancelled."

The New Zealand Defence Force says it is monitoring the situation in Tonga and is ready to assist if requested by the Tongan Government. So far no request has been made.

New Zealand's MetService said the eruption had resulted in a "pressure surge" which had been observed in its weather stations across New Zealand tonight.

Meanwhile, officials from both Fiji and American Samoa have also issued warnings to their populations over potential tsunami.

The warning issued in American Samoa states: "A hazardous tsunami may have been generated by this nearby volcano that could soon impact nearby coast.

"Monitoring is underway to evaluate the tsunami threat."

It added that current observations indicated that "tsunami impacts in American Samoa are greater than had been forecast".

Fijian residents, especially those in "low lying coastal areas" have been urged to stay out of the water.

"Strong currents and dangerous waves" had been reported.

New Zealand's WeatherWatch described the event as a "huge volcanic eruption that caused a tsunami in Tonga and turned daylight into darkness ".

It also shared imagery by captured by the Himawari satellite.

WeatherWatch said "the satellite imagery is one of a kind capturing an eruption this big and this clearly".

There have been claims on social media that the eruption was heard by some Kiwis as far away as Papamoa and the Hawke's Bay.

The loud eruption was heard as far away as Fiji, with Anthony Brown – who is in Nadi – telling the Herald: "For the last hour there have been continuous explosive sounds with continuous rumbling, windows rattling and doors rattling."

The US Storm Watch website said that the eruption was "one of the most violent volcano eruptions ever captured on satellite".

Volcanic ash was raining down on the capital city of Nuku'alofa.

When the tsunami warning was announced, police and local authorities advised all residents to move to higher ground.

One local posted on social media: "A volcanic explosion just erupted and people have evacuated to higher ground now from possible tsunami waves also ash shards are falling and now the ash clouds are covering the island of Tongatapu.

"We live in Kolomotu'a near the ocean so we have left already and we are in our cars heading out but traffic on every road. Please pray for us as a family and safety."

The Hunga Tonga-Hunga Haʻapai volcano is located about 30km south-east of Fonuafo'ou island in Tonga. It had been active from December 20, 2021, but was declared dormant on January 11.

Taaniela Kula, Deputy Secretary, Ministry of Lands & Natural Resources – who was in charge of the group – told local media outlet Matangi Tonga: "Yesterday there were massive explosives, thundering lightning within two miles away, we observed and recorded.

"Big day yesterday indeed!. It was great getting out there during the volcano's peak hours. It's a geologist's dream to see actual geological events in process."