Leigh Sales started her final day as host of 7.30 after a 12-year-stint by posting a video outside a convenience store, dressed in trackies and clutching a donut and a 7-Eleven coffee.

The former Washington correspondent and Lateline host, 49, arrived at work at 7am and did four media interviews before 9.30am. She recorded a voiceover for a special farewell program before starting the day’s work on the final program. It’s a relentless 12-hour day that she has juggled with two young boys for more than a decade.

Sales told Guardian Australia she has no idea what she will do next and just wants to step outside the daily news cycle and curl up on the couch with her kids.

“I am having six months off to try to get a rest because I’m exhausted after you know nearly 12 years of 7.30, and I feel like until I actually get some headspace and slow my life down a bit that I just can’t figure out what I want to,” she said.

She is thrilled her former executive producer at 7.30, Justin Stevens, is now the head of news and is looking forward to exploring new career options at the ABC. She has no desire to move into commercial TV. “The media is littered with people who were successful at the ABC and then went to commercial media and it doesn’t work.”

After the show wrapped for the final time on Thursday night, with her excited sons Daniel and James running on to the set, fellow ABC broadcaster and best friend Annabel Crabb told a private farewell gathering that the makeup-free appearance on Instagram was “typical Sales”: a woman who faces intense scrutiny on television but who does not hesitate to post a video “looking like the robber’s dog” on her big day.

“That is Sales all over; never afraid to just look ridiculous,” Crabb said. “And I love that about her. Is it a Queensland thing?”

It’s a sign of how respected Sales is at the ABC that a former and the current managing director and two former heads of current affairs turned up to see her off on a night the ABC was celebrating its 90th birthday with a live event and a party in the foyer. The speakers on the Dot Strong Terrace variously roasted the presenter about her “dagginess”, her work ethic, her relentless boasting about her interview with Paul McCartney and the time she had to google who Justin Langer was before an interview. The former Cricket Australia coach was one of the many people to send messages that were read out by Stevens.

Former ABC news chief John Cameron, who preceded another guest Gaven Morris, told the crowd the young Queenslander “ticked all the boxes” when he interviewed her for a job in Brisbane in 1995 and she had gone on to make him proud.

Former MD Mark Scott told the gathering Sales had arguably faced a tougher environment than her predecessor, Kerry O’Brien, because of social media and unprecedented political and media turmoil. Although management had initially hesitated and replaced O’Brien not with one but two presenters – Sales and Chris Uhlmann – she had quickly made the show her own.

“History will show just how much more complex this decade has been than any before it,” Scott said.

“Since the beginning of television, plenty of audience members have screamed back at Kerry O’Brien, Andrew Olle and even Caroline Jones. Your audience talking back to the set is a tried and true tradition but at least no one else could hear what they were saying. One of the challenges of Leigh’s era has been the fact that with social media we can all hear what everyone’s saying over and over and over again, wise or not wise.

“Kerry O’Brien came through 12 years with only one prime minister. You had six and just the constant turmoil and constant change and constant revision that winner-takes-all politics brings. But nevertheless, she persisted and in persisting just showed this remarkable strength and resilience and perseverance.”

The current ABC managing director, David Anderson, said Sales was “famously unflappable”, especially on election night, and was “scrupulously fair” on all politicians.

Producers and crew in the control room agreed that she was always even-tempered under enormous pressure, saying they had never seen her “lose it”. Every 7.30 staffer who could turned up for the last day, cramming into the studio to watch live.

Stevens described how difficult it was for Sales to anchor a daily news program while making sure her kids didn’t miss out, and how she would FaceTime them to say goodnight every night before the show. He said she had presented him with printouts about a “virus in China” before it was on his radar, so meticulous is she in her research.

Investigative reporter Sarah Ferguson will be in the 7.30 chair from Monday. 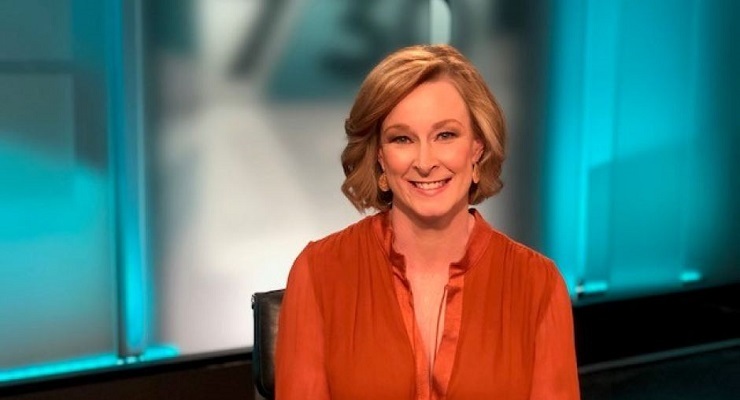 A farewell to Sales: end of an era for the ABC’s 7.30 host
Viewers gathered in big numbers to send departing 7.30 host Leigh Sales off in style.

Crikey
One subscription that gives you access to news from hundreds of sites
‘End of Financial Year Sales’ is on tonight. Thanks, Leigh…

The veteran anchor of ABC’s 7.30 program — spanning 12 years and five prime ministerships — will be signing off…

Passengers will see two bespoke bulletins a day from the national broadcaster. Plus: Aunty’s stars party at Ultimo