How Tasmania's 'turbo chook' native hen has survived, despite the odds 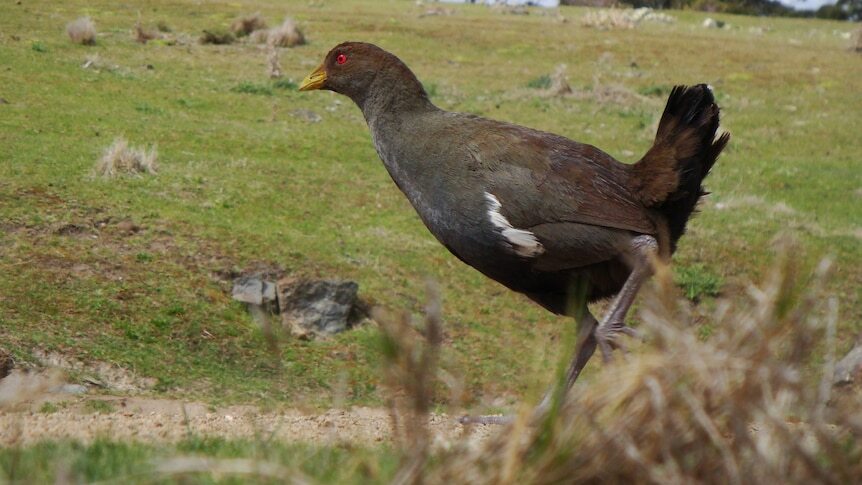 Turbo chooks — if you're from Tasmania, you'll immediately know what I'm talking about.

The Tasmanian native hen is the island state's very own Road Runner.

And while Tasmanians have come to love the humble bird, one researcher believes some of the more remarkable facts about the native hen aren't widely known.

Survived, despite the odds

Lucile Leveque is a PHD student at the University of Tasmania and has researched the Tasmanian native hen for the past four years.

The hen is part of a species of bird known as the rails, and Ms Leveque said their story was exceptional.

"Flightless bird species massively went extinct when they first met people, about 3,000 or more years ago," she said.

The native hen did also exist on the Australian mainland, but like the Tasmanian devil, is now only found in Tasmania.

"Surprisingly and happily, the native hen is doing very well [in Tasmania], which is also exceptional," Ms Leveque said.

"That is probably from the way they evolved.

"They love to live just beside humans, and Tasmania might be the only place in the world where you can be near and interact with flightless rails."

A bird that doesn't fly?

It doesn't sound right, does it. A flightless bird.

Why the native hen doesn't fly is a question that still haunts Ms Leveque.

"It's one of the biggest mysteries about the native hens and we have no idea how or why they became flightless," she said.

The native hen lived on the Australian mainland thousands of years ago, and despite living alongside various predators, they evolved to be flightless.

It's also why climate change could pose an existential threat to the species.

"Because native hens are so dependent on water, if the climate becomes hotter and drier, they will naturally disappear from some areas," Ms Leveque said.

How about that nickname

It doesn't take a PHD student to work out why the Tasmanian native hen has been dubbed the turbo chook.

"They can run up to 50 km/h, which is incredible," Ms Leveque said.

"They will just speed up everywhere, dart across the street, or across the road."

And it's one of many reasons Tasmanians have become so patriotic about this flightless bird.

So next time you're in Tasmania and see a native hen, it'll probably run away before you've had a good glimpse.

But take comfort in the knowledge you've just seen a bird that despite the odds, has survived into the 21st century.