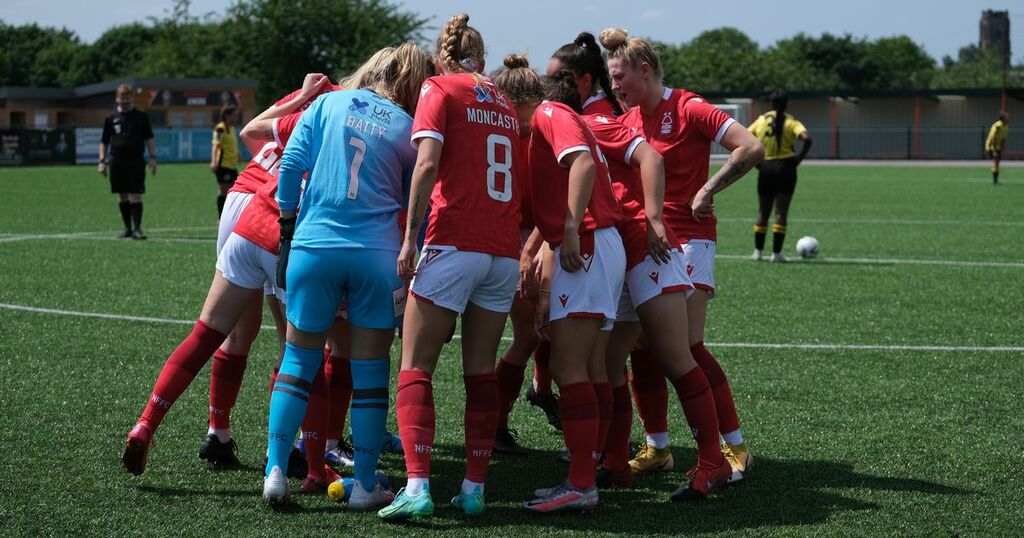 The link between Nottingham Forest Women and BMX Olympic medallist Charlotte Worthington might not be an obvious one.

But the Team GB star may well end up playing a small, unintentional, part in the Reds achieving their own gold standard this season.

After two covid-disrupted campaigns, Andy Cook’s side want to reach the top of the podium. Or at least the top of the third tier table, the FAWNL Northern Premier Division.

The structure, the integration within the whole football club, the determination - Cook believes everything is in place for success both in the short and long-term.

And in a speech on the eve of the new term, he used a quote from freestyle ace Worthington, on the back of her triumph in Tokyo, to help focus his team.

“We were speaking to the players and the motivation they have to really do well this year drives me on, and drives everyone on,” Cook told NottinghamshireLive.

“We have it anyway, but when you speak to them there’s a real grit and determination to kick on this year - ultimately to finish in that top one position and try to get into the Championship. And for the first time in what will be three years, to have some sporting success, rather than a curtailment.

“We’ve been saying, it will mean so much more if you go through that full season, having gone through all the hard miles and all the hard work, to finish in the top spot. The grit and determination is definitely there.

“The goal is to win the league.

“Before training on a Tuesday, we have a pre-training meeting. Because it was the week of the opening game, I just wanted to channel everyone’s thoughts onto that. We said, our goal is to win the league, absolutely, but we can’t win the league tonight or in the first game - it’s a part of the process.

“I used the example of Charlotte Worthington, who won gold in the BMX at the Olympics. I saw a quote from her which said, the goal was to win gold in Tokyo but once she got closer to the event she realised, actually, the goal was just to land her tricks and complete her run.

“We were using that as an example, saying, our goal is to make sure we’re passing the ball to each other, that we’re shooting at goal, that we’re blocking shots and tackling when we need to. That’s our goal. Ultimately, if we do that week on week, game on game, we’re hopefully going to be in a position to win the league. But we’ve got to focus on those short-term processes to do that.

“Yes, the goal is to win the league, but the real goal is session by session, game by game - can we get those small things right.”

They are certainly doing that off the pitch.

This year, for example, season cards have gone on sale for the first time. Priced £35 for adults, £20 for concessions and £99 for a family ticket to watch the team play at Eastwood, usually on a Sunday afternoon, it is all about providing the best possible platform to perform.

And that also includes being a part of the football club in general - something which has been a key directive in recent years.

“I’ve worked at several other football clubs in their women’s departments, and this is the best I’ve seen, in regards to the support we get,” said Cook.

“I’m a full-time member of staff, so everything that goes on around the club, I’m included in those conversations, regarding sponsors, commercial, marketing, all those kinds of things which help drive the women’s team forward. Just having that exposure to what’s going on day to day in the club is fantastic.

“We’ve still got to get results week to week. We’ve still got to win football matches. Ultimately, that’s going to help our cause massively. But the club, in my opinion, are doing the right thing by the women’s team in regards to integrating them fully into the football club, with things like the fact we can play at the City Ground and the season cards.

“We’ve got the full backing of the football club. From the new CEO (Dane Murphy) down, everyone is really behind the women’s team. The support we get is fantastic.

“An example of one of the biggest things is we travel on the same coach as the men. The men maybe play away on a Saturday, then on a Sunday we have the same coach.

“Having season cards is huge. That’s been a real positive of the football club, the way they’re supporting us.

“Just knowing we’re going to have a certain amount of people watching us is fantastic.

“If we know we’re getting 4-500 people a week, it makes so much difference, especially because we play at Eastwood - a small ground and the crowd are really close to the pitch.

“It’s a good, friendly atmosphere and a good day out to watch some good football.”

Next month, Forest will face arch-rivals Derby County at the City Ground, on October 3 - the first time a women's league match has been played at the stadium.

If Cook gets his way, not only could it be a landmark occasion and be a key step towards reaching the team’s goal this season, it could also be the spark which inspires the next generation.

“We want to get as many people and as many Forest fans down as possible,” he said.

“The league record for attendance is actually held by Derby, from when we played them at Pride Park and beat them 1-0 (in 2019, in front of 2,318 fans). I imagine a lot of Forest fans will want to try to help beat that.

“If we could get a big crowd there it would be unbelievable. Just to be able to play there as well is fantastic.”

It would also be testament to the strength of the women’s game, which is growing every year.

As well as being focused on the present, there is also an eye on the future, with the sport as a whole looking to build on Team GB reaching the quarter-finals at the Tokyo Olympics, as well as Euro 2022, which will be held on these shores.

Have you been to watch Forest Women? Have your say in the comments below

“Looking at it as a coach in the game, it’s about the audience - getting the players and the games in front of an audience which are not just women’s football fans, but who are just football fans.

“The quality of the football is getting better as well. From my years involved in it at different levels, it’s getting better and the leagues are getting stronger. We’re seeing that with the fact we’ve managed to sign a few players from the WSL and Championship who have dropped down a league to come and play.

“It’s a really exciting time to be involved.

“Inspiring the next generation is something I’d like to pride ourselves on. We’ve got quite a few players who are from Nottingham and have been through the ranks, from under-nines right the way through to first-team.

“That 10-year-old girl who’s watched the Olympics this summer or the Euros next year, then she’ll be 20 in 10 years. She could be playing for Nottingham Forest. She might be able to remember those first sessions of getting involved, those first games she went to - maybe a game at the City Ground when she came and saw Lyndsey Harkin score the winner against Derby in front of 15,000 people! Can she remember that?!

“Hopefully we get to that point.”

Forest have made a fine start to the campaign so far, unbeaten in their opening four games, before losing to Wolverhampton Wanderers on Sunday.

“The biggest thing for us is we just want to complete a full season,” Cook added. “We got three-quarters of the way through two years ago, then last season we got until December.

“We’re just hoping things go well now and we can complete the season.

“We’ve had a good pre-season. We’re hopeful we can do the business and finish in that top one position.”