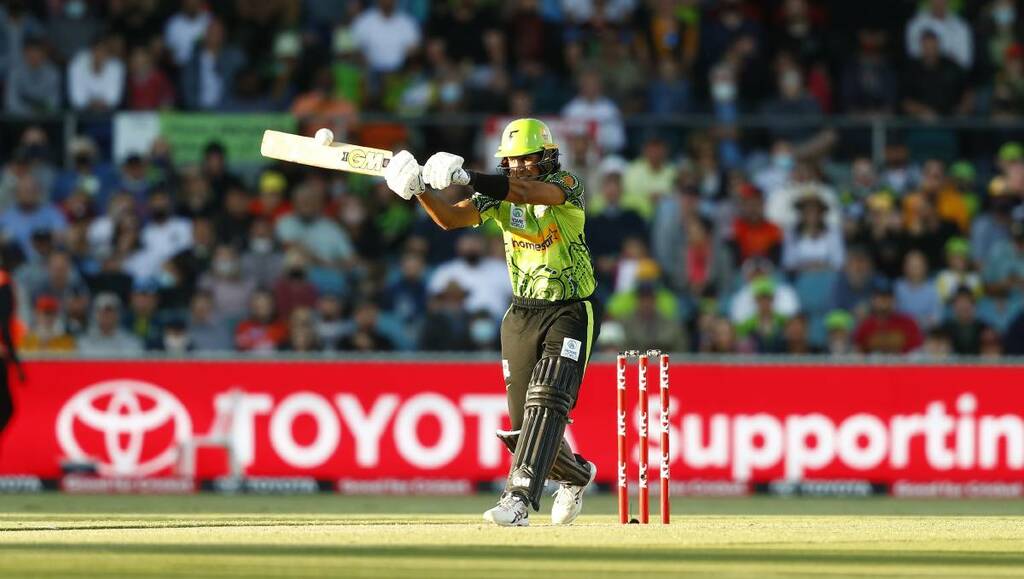 NEWCASTLE'S Jason Sangha has revealed how conquering his fear of failure - and an unexpected show of faith from his coach - has transformed him into a Big Bash League run machine.

The 22-year-old from Cardiff South debuted for Sydney Thunder in December 2018, scoring a dazzling 63 from 36 balls in his maiden innings, becoming the youngest player in the competition's history to score a half-century.

At the end of that campaign, he then inexplicably spent two full BBL seasons on the sidelines before earning a recall on December 19 for the Thunder's clash with Brisbane Heat.

Another failure could have resulted in a frustrating return to the reserves bench.

"There was definitely a part of me that was a bit scared of getting out for not many," Sangha told the Newcastle Herald.

"I suppose I'd been questioning if I was good enough to play at this level.

"But I told myself that if this was my last opportunity in BBL cricket, I wanted to have fun and be out there batting for a long time."

Sangha proceed to carve out 39 from 28 balls to kick-start one of the hottest runscoring streaks seen in the BBL this season. The classy right-hander has since been an irresistible force for the Thunder, hammering 329 runs in eight games at an average of 65.8 and a strike rate of 132.66.

Only Hobart's Ben McDermott (495) and Perth's Colin Munro (353) have scored more runs this season than Sangha.

"Going into that first game at the Gabba, the one thing I really tried to do was to take the result out of the equation," he said.

"I didn't worry about how I went or the number of runs next to my name. I knew my game was in a pretty good place and the only thing that was going to let me down that day was my mindset - if I was worrying about getting out.

"It's amazing what can happen when you take the fear of failure out of the equation and just stay totally present.

"If you can stay in the moment, trust your instincts and have fun, it's amazing what you can accomplish.

"As a professional athlete, there is always that fear of failure. But you have to accept that sometimes you will fail.

"That's just the way sport is.

"But staying in the present, watching the ball and reacting, that provides the clarity you need."

Sangha said the advice he received from senior players and coaches was to relax and back himself.

"It's a high-pressure game, so you don't need to be any more intense or any more stressed that you usually are," he said.

"So I decided to go out and have some fun and enjoy it.

"And that comes also from batting with guys like Alex Hales and Sam Billings, who are world-class players and know exactly what they're doing in the T20 format.

"To bat with them and have some nice partnerships, it's been awesome. I've just been having so much fun."

If Sangha has been pleasantly surprised with his T20 turnaround, he was genuinely shocked when Thunder coach Trevor Bayliss called last week to tell him he had been appointed stand-in skipper in the absence of Chris Green (COVID) and Usman Khawaja (Test duties).

Despite being one of the youngest players in the team, he boasted previous captaincy experience with the Australian under-19s, and his Sydney grade side, Randwick-Petersham.

"If you'd told me six weeks ago that I was going to be stand-in captain, I would have thought you were joking," he said.

"But TB was really reassuring that I was the right man for the job.

"He said I was his first choice, and from that I felt really valued and empowered that he rated me so highly as a player.

"In any sport, once you feel you are a valued member of the team, it's crazy how much confidence you can gain and how empowering that is.

"I'm just really grateful to TB for giving me that opportunity."

Sangha said it had been pleasing to cast aside any perception that he was a red-ball specialist.

"I really want to explore how good I can be, and hopefully represent Australia in all three formats," he said.

"I guess I had been labelled a red-ball player, because that's where I was getting most of my opportunities, but this year I've been given an opportunity in the BBL and I've been happy with how I'm playing thus far.

"If one format overtakes the others, so be it, but at the moment my end goal is to represent Australia in all three.

"But I've got a lot of work to do between now and then."

A call-up to the national T20 team could come as soon as March, when Australia face a series against New Zealand while the Test squad is on tour in Pakistan.

Sangha those decisions would be made by a "very smart" selection panel and his focus was on continuing to play well for the Thunder, who have won their past six games - two of which were under his captaincy.

"I want to help us win it," he said. "I really think we can go all the way and win the title."