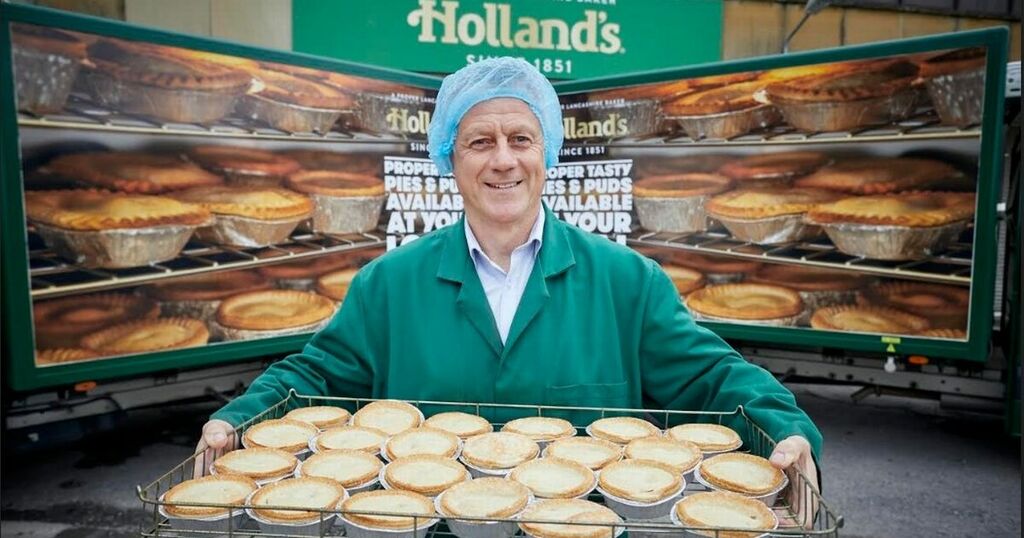 While it began as a small bakery 170 years ago, Holland’s Pies is now one of the best-known pie manufacturers in the UK.

Holland’s started life as a small shop in Haslingden in 1851, selling pies as well as cakes and bread to hungry locals but before long the company had outgrown its base and in 1929 took over a disused cotton mill in Baxenden.

Textile mills don’t offer the typical layout for a food production factory and so it took six years to convert the building. Holland’s is still based at that former mill today with 95% of employees coming from the local area.

One of those employees is Noel Duffy from Baxenden who has worked for Holland’s for 41 years. Noel started his career at the mill as a trainee mechanic and now looks after the entire fleet of Holland’s vans which deliver pies to 1,250 fish and chip shops across the North West.

“We bought our first delivery van in 1929 and now we have 15 delivering to fish and chip shops throughout the region,” brand manager Leanne Holcroft said.

“Fish and chip shop owners say they stock Holland’s Pies because people ask for them.”

READ MORE: Tragic death of man, 37, who died after noticing blister on his leg

Now Holland’s makes more than 1.2 million pies a week - if all the pies Holland’s makes in a year were laid out one after the other the line would stretch from Accrington to the North Pole. Every week the factory goes through 40 tonnes of flour, 10 tonnes of potatoes and 30 tonnes of British or Irish meat. Strangely, there is an element of regional diversification when it comes to tastes - Liverpool pie-lovers prefer steak and kidney pies to steak and kidney puddings whereas in Wigan the steak pie is the favourite. Outside of the North West Holland’s meat pies are the most popular.

Holland’s even has its own fan base. Expat Lancastrians have asked the company to post pies across the world, families ask for ‘Golden Ticket’-style factory tours, they receive regular requests to make one-off wedding and birthday cakes, one fan has kept a Holland’s pie frozen for 36 years and one man has taken his burnt meat pie all over the world, with the pie’s very own sombrero and deck chair.

Furthermore, Holland’s Pies are “by far” the market leader - classed as the UK’s number one frozen individual pie brand (Kantar Worldpanel) after overtaking Birds Eye in 2020.

So what is it about Holland’s that makes their pies the best?

Strange as it may sound one of the reasons goes back to the Second World War when fat was rationed. Holland’s had to reduce the amount of fat in the pastry with hot water and they’ve kept the recipe ever since, Lancs Live reports.

That’s why Holland’s pies can be microwaved - because they contain between 10 to 15% fat compared to 30 to 40% fat in other brands (pies containing more fat will collapse if microwaved).

The frozen pie market is where Holland’s is focused but since the 1990s they also sell chilled pies and this year, to celebrate the company’s 170th anniversary, Holland’s has launched a four-pack peppered steak pie and a pork pie.

Although Holland’s has its roots in Lancashire and is a dominant brand in the North West - over 70% of pies sold in the region are Holland’s, their pies also have strong sales in London, Yorkshire, the South West and Wales.

One of the reasons for the popularity and awareness of Holland’s Pies is that every Saturday thousands of football supporters tuck into one. The company currently supplies pies to Burnley, Bolton Wanderers, Leeds United, and FC United.

And the unique fat content of the pastry makes Holland’s Pies perfect for footy fans - using less fat creates a firmer pastry case which is perfect for hand-held eating as the pie doesn’t break up or crumble in your hands.

“When you go into our bakery it’s like going back in time,” Leanne added.

“We use really large pans and slow cook our fillings for about three and-a-half hours, almost like cooking a casserole, and it’s that slow cooking process which gives our pies the intense flavour.

“We don’t use monosodium glutamate (better known as MSG) or artificial colours, flavours or preservatives, and our cooking method has never changed.”

As well as the new product launches Holland’s has lots of plans lined up for their anniversary year with Leanne hinting at a very special surprise for locals.

“All I will say is the people of Baxenden should keep a close eye on our social media later this month,” she added.