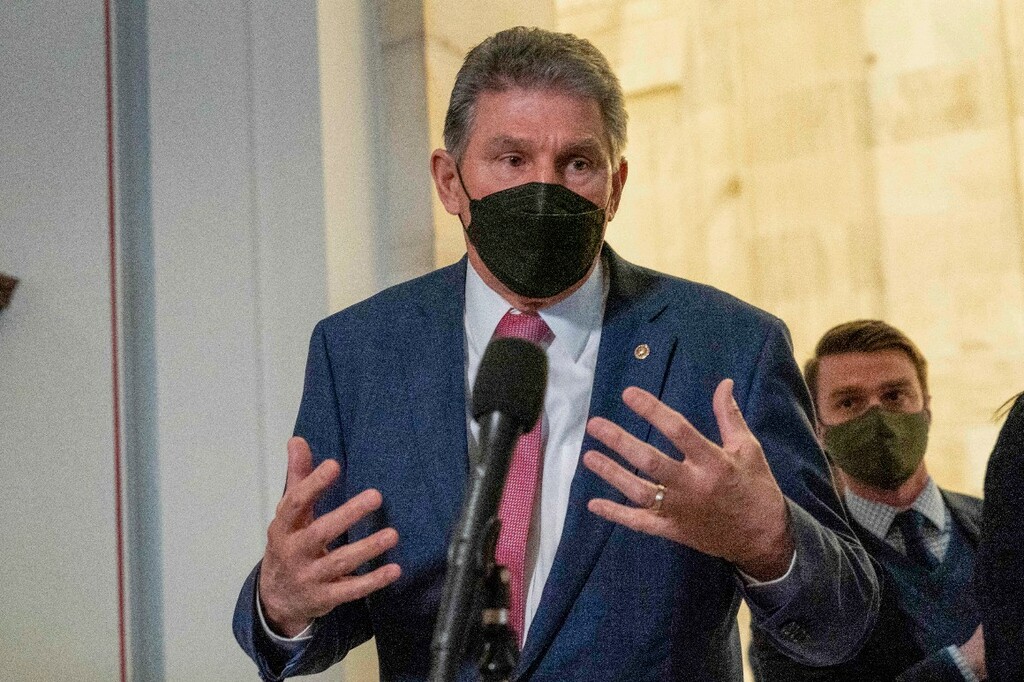 After hearing his Senate predecessor's name invoked repeatedly over the past few months, Joe Manchin lobbed a pointed question at Joe Biden behind closed doors on Thursday: Did the late Robert Byrd ever break Senate rules to change them?

The president had a simple answer for Manchin: “We are in different times now,” according to multiple people with knowledge of the meeting.

During a private visit with Democratic senators designed to sell them on changing the rules to pass a voting reform bill, Biden added that Byrd, the former Democratic majority leader who criticized filibuster abuse in the twilight of his life, wanted the Senate to function and sometimes that meant changing the chamber's storied traditions.

Biden talked about Byrd — with whom he served in the Senate — at some length during his meeting with the 50-member Democratic caucus, contending that the late West Virginian believed Senate rules aren’t static and need to evolve. Later in the discussion, Sen. Jeff Merkley (D-Ore.) recounted that Byrd had maneuvered several times to change smaller-scale Senate rules by a simple majority vote — the same sort of move that Merkley and other progressives have sold nearly all members of their party on doing.

“Joe asked a question about Senate rules change. And Joe [Biden] talked about his experience. He’d been here 36 years. It’s changed a lot. The point he made is the Senate rules are not sacrosanct,” Sen. Tim Kaine (D-Va.) said after the visit. “President Biden, speaking as a senator who saw rules changes a lot, talked about the fact that rules change because times change.”

But Thursday was a painful day for Senate rules reformers. The commander-in-chief coming to the Senate for a final push on rules changes couldn't shake the resistance of Manchin and his fellow centrist Sen. Kyrsten Sinema (D-Ariz.). Senate Majority Leader Chuck Schumer said Thursday evening that the chamber would postpone a previously scheduled recess and return Tuesday to begin debating the election and voting legislation. He also reiterated his pledge that the Senate will vote on rules changes if Republicans block moving to final passage, as they're expected to do.

Despite Biden's visit and next week's floor showdown, Manchin and Sinema are only digging in.

After the caucus meeting, Manchin declared in a new statement that “I will not vote to eliminate or weaken the filibuster.” He cited Byrd’s 2010 Senate Rules Committee testimony, in which Byrd emphasized the need to protect the filibuster but also decried its excessive use. His stiff-arm was a major blow to Biden and Schumer's effort to change rules along party lines.

Even as Democrats filed into their caucus meeting with Biden about changing Senate rules to reform federal elections, a response to GOP-backed state laws designed to restrict ballot access, a good portion of them were unaware they had already lost. Just minutes before the group's meeting with Biden, Sinema slammed the door on weakening the filibuster during a speech on the Senate floor Biden once called home.

“People were just surprised when we went in there. Because no one knew she was on the floor speaking” in defense of the filibuster, said a Democratic senator who missed Sinema’s remarks. “There were probably 20 people in there that didn’t even know that she had said anything."

Biden had prepared remarks for the meeting but instead opted to speak off-the-cuff, recalling that he got the late Sen. Strom Thurmond (R-S.C.) to support the Voting Rights Act while they were both in Congress and arguing that a majority of today's Republicans today wouldn’t support that landmark bill. Biden told senators he couldn’t remember a time in U.S. history where a party had been so enthralled to one person as the GOP is to former President Donald Trump.

Unlike Manchin, Sinema did not ask Biden a question during his roughly 90-minute visit with the caucus. There might not have been much to say: Sinema made crystal-clear during her speech that while she supports voting and election reform bills, she “will not support separate actions that worsen the underlying disease of division infecting our country.”

Many Democrats declined to comment on Sinema’s prebuttal to Biden, which privately rankled some who thought she should at least hear the president out. Sen. Jon Tester (D-Mont.) observed: “The timing is interesting.”

During his meeting with Democrats, Biden also sought to clarify a Wednesday attempt to speak with Senate Minority Leader Mitch McConnell after the Kentucky Republican slammed the president for an Atlanta speech that invoked the civil rights movement in pushing for the voting reform bill.

Biden told the senators that he doesn’t think McConnell is comparable to civil rights-era segregationists and asked Republicans which team they want to be on when it comes to voting rights.

Sen. Kirsten Gillibrand (D-N.Y.) spoke inside the room to ask Biden what he would say to colleagues concerned that Republicans would take advantage of a weakened filibuster when they again regain Senate power. Biden replied that the GOP is currently very divided and said Republicans would have trouble jamming priorities through with a majority as slim as 52 seats.

The president briefly addressed reporters after the visit, observing the long odds he faces: "The honest to God answer is, I don't know that we can get this done."

For some it’s obvious that no amount of private lobbying from Sinema's colleagues, no public criticisms from activists and no floor vote to change the rules will make her shift her position.

“Clearly, she was telegraphing she wasn’t going to change her mind,” said Sen. Mazie Hirono (D-Hawaii). “So, there you go.”

Even with Sinema and Manchin’s latest statements, Schumer is giving no indication he's backing down from his push for a floor vote on rules changes, even if it means dividing his 50-member caucus. White House press secretary Jen Psaki said that the White House would keep fighting.

But Psaki added that it's up to Schumer to decide what the next steps are for a bill the party has portrayed, in stark terms, as essential to save American democracy.

And Biden hasn't yet given up on changing the two centrists' minds. He met with both Manchin and Sinema at the White House Thursday evening, according to a White House official.

Although next week's vote on rules changes appears headed toward failure, many senators want to continue to plunge forward. Sen. Jon Ossoff (D-Ga.) gave a passionate speech during Thursday's meeting with Biden, laying out recent GOP changes to voting laws — including in his state — and imploring his colleagues to act. Sen. Raphael Warnock (D-Ga), who is up for reelection this fall, said afterward that regardless of his two colleagues’ opposition to rules changes, the “most important thing is to have voting rights, period.”

Sen. Chris Van Hollen (D-Md.) argued that the upper chamber already empowers the minority, given that states like Wyoming have as many senators as California. And Sen. Patrick Leahy (D-Vt.), the party's most senior senator, asked why the caucus couldn’t unite around weakening the filibuster.

Leahy said that, during the last year of his four-decade-plus Senate career, he would do whatever it takes to get those bills passed.

“We’re going to have a lot of drama when we come to vote,” said Merkley, who sat on the Senate floor during Sinema’s speech. “Hope’s going to spring eternal for me, until it’s squelched.”