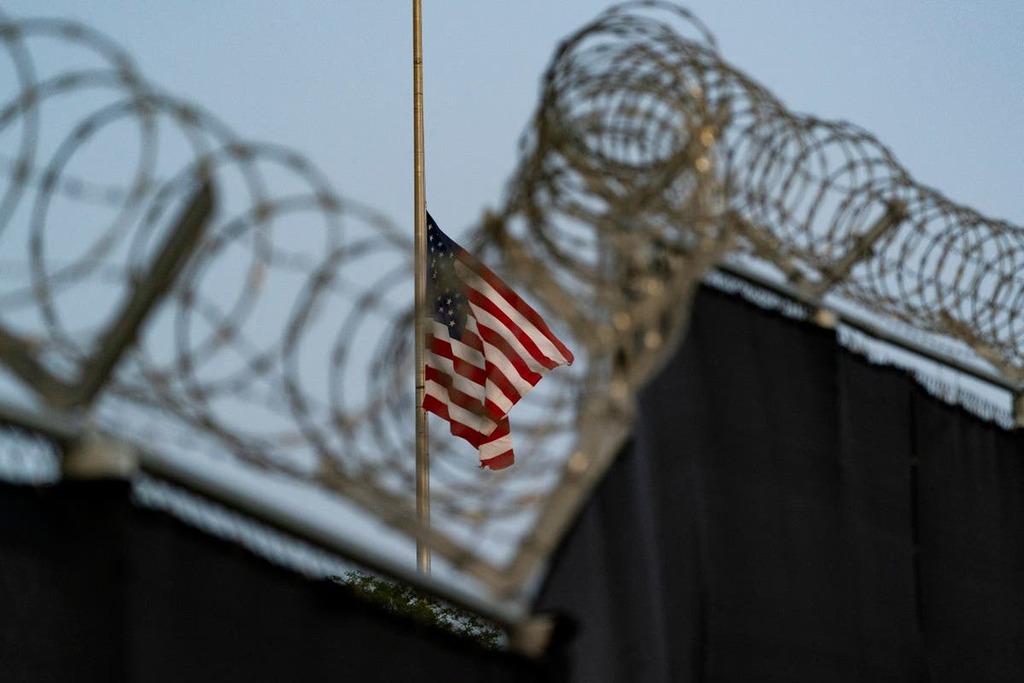 It was just four months after the September 11 attacks that the first prisoners arrived at the US naval base in Guantanamo Bay, Cuba. Some 20 prisoners from the battlefields of Afghanistan were led from a cargo plane in handcuffs, their faces and eyes covered, to a new kind of detention facility.

A photograph released a week later by the US navy of those same prisoners wearing orange jumpsuits, on their knees and watched over by their captors, would endure for years after. The number of prisoners would swell and the facility would become synonymous with torture, rendition and human rights abuses – those images were a potent symbol of it all, of a changing America, one that had forgotten its own values as it set out on a quest for vengeance.

Barack Obama summed up the feeling shared by many on the campaign trail in 2007, shortly before he won the presidency. “In the dark halls of Abu Ghraib and the detention cells of Guantanamo, we have compromised our most precious values,” he said.

The Bush administration’s decision to use torture began with the capture of a man US officials described as the first “high-value detainee” of the War on Terror. Abu Zubaydah, a Palestinian national captured in Pakistan in March 2002, was said to have been a senior al-Qaeda operative – an accusation that later turned out to be false. He was accused of having information about future attacks against the US and so was handed over to the CIA. He would become the first person to face the “enhanced interrogation” techniques deployed by the CIA.

Waterboarding, sexual harassment and abuse, physical abuse and sleep deprivation were all approved by the US government for use against detainees. Guantanamo Bay became the lightning rod for the torture programme, but most of the abuses took place at so-called CIA “black sites” around the world – secret jails outside the rule of law. Some 50 sites in 28 countries were thought to have been used for the programme.

Most of the torure took place behind closed doors in these highly secretive sites, but the world was given an insight into the kind of abuses taking place in US jails overseas with the explosion of the Abu Ghraib scandal in May 2004. The jail outside Baghdad had been a notorious torture centre under Saddam Hussein, and became so again when the invading US forces reopened the facility to hold captured fighters and terror suspects.

Former prisoners first alleged serious abuses by US forces in 2003. Investigations were launched quietly and charges were filed against the perpetrators, before images of the abuses were leaked to The Washington Post the next year. They revealed US soldiers engaged in the dehumanising abuse of detainees. Prisoners were stripped naked and photographed piled on top of each other. They were covered in human excrement and set upon by dogs, while US soldiers stood alongside them and smiled for the camera.

The “war on terror” became synonymous with torture. The initial outpouring of sympathy for the US following the 11 September attacks began to fade as the excesses of that global campaign began to take hold. According to Pew Research, a median of 50 per cent across surveyed nations said the US torture programme against suspected terorrists was not justified, while only 35 per cent said it was.

At home in the US, it was a different story. Opinion polls found significant support among Americans for the kind of interrogation and torture used by the CIA around the world in pursuit of terror suspects. In a Pew Research poll in July 2004, 43 per cent of Americans agreed that the torture of suspected terrorists to gain important information is often or sometimes justified – that number has now grown to a slight majority.

The 9/11 attacks also led to a shift in America’s values regarding liberty and the relationship of citizens with the state. The share of Americans who believed it was necessary for the average person to give up civil liberties in order to curb terrorism rose from 39 per cent in 1997 to 55 per cent in 2002, according to Pew Research. The attacks also changed how Americans treated each other. Islamophobia spiked across the US in the immediate aftermath of 9/11, and hate crimes against Muslims rose by 500 per cent between 2000 and 2009, according to data from Brown University.

The US torture programme was consistently justified by its defenders, inside and outside government, as a necessary evil and a strategy to balance the security of US citizens and the values that they hold dear. But it later became clear that the underlying premise of those extraordinary measures – that they provided actionable intelligence that saved American lives – was flawed.

A Senate report on the programme, released in 2014, found that it was more brutal and far less effective than the CIA had claimed. Senate intelligence committee chair Dianne Feinstein said that torture “regularly resulted in fabricated information” and that the CIA was “often unaware the information was fabricated”. In a summary of the findings, she said that the torture programme had been found to be “morally, legally and administratively misguided”.

As the years went by, prisoners who were held for years without charge at Guantanamo Bay were quietly released or transferred to third countries. Many of them were never convicted.

By the time of the release of the torture report, the perception that the US had abandoned its principles in the quest for revenge was no longer controversial. Addressing the findings of the report, Senator John McCain, who was tortured by the North Vietnamese after his plane was shot down during the Vietnam war, echoed the words of his former opponent, Barack Obama: “But in the end, torture’s failure to serve its intended purpose isn’t the main reason to oppose its use. I have often said, and will always maintain, that this question isn’t about our enemies: it’s about us. It’s about who we were, who we are and who we aspire to be. It’s about how we represent ourselves to the world,” he told the Senate floor

“We have made our way in this often dangerous and cruel world, not by just strictly pursuing our geopolitical interests, but by exemplifying our political values, and influencing other nations to embrace them. When we fight to defend our security we fight also for an idea, not for a tribe or a twisted interpretation of an ancient religion or for a king, but for an idea that all men are endowed by the Creator with inalienable rights. How much safer the world would be if all nations believed the same. How much more dangerous it can become when we forget it ourselves even momentarily.”