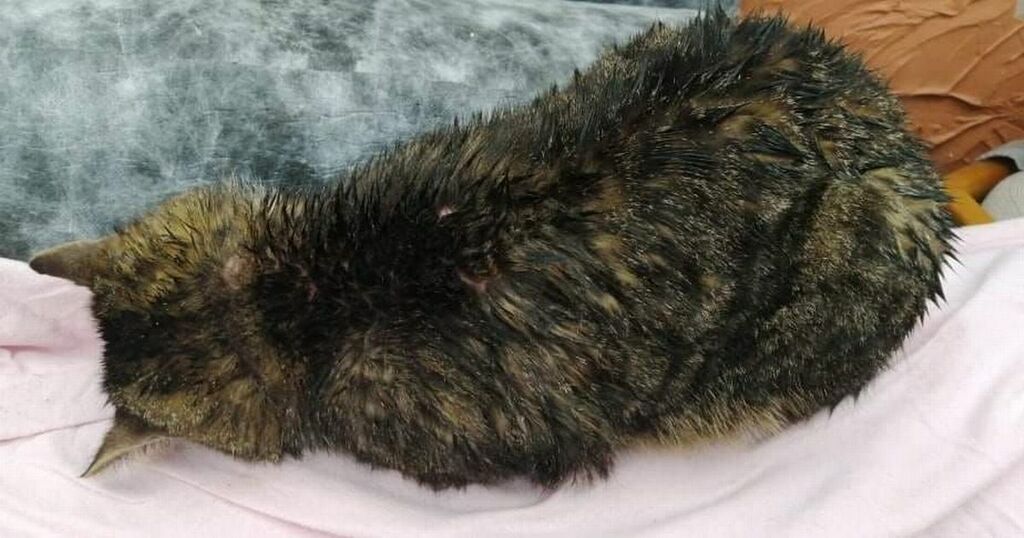 A cat needed medical treatment and some TLC after having chemicals thrown over it.

The pet, taken in by a family home in the Swansea valley, was targeted with a noxious substance which left it with clumps of fur falling out and burnt skin.

Its owners say it is the second time the pet has been subject to such an attack in the same area of Cwmllynfell.

READ MORE: Swansea restaurant which served free meals to the homeless on Christmas Day is ransacked

Owner Rose Harrison said: "He is a young stray we took in around a year ago, and he's a big softy.

"My daughter dropped our grandson over earlier this week because we were looking after him, and after she left she returned a few minutes later to ask if we'd seen the state of the cat.

"He had been covered in something, and had big patches without fur and skin that was red raw. He looked terrified.

"We contacted the vet who told us to bring him down who put a drip in his leg. He told us he believed someone had deliberately thrown something on him because of the pattern of down his back and neck, with some splashes on his leg. His collar was soaked in whatever had been thrown over him, and so it was very bad around his neck".

The family believe the incident, which took place in Cefn Bryn Brain on Tuesday, January 11, is not the first time the cat has been deliberately targeted.

Around two months ago he returned home covered in a sticky substance, but as it had not adversely affected him, they believed it had been a one-off incident.

But grandmother-of-13 Rose said: "I am just really angry about it. It makes me so mad to think there is someone sick enough to do something like this. It is beyond belief.

"He is getting better now but he's been very jumpy".

A Dyfed Powys Police spokesman said: "We received a report of a cat returning home to a property in Cwmllynfell on Tuesday, 11 January, with a sticky, toxic substance covering its fur.

"Following initial enquiries, no evidence was identified, so the matter is now on file.

"However, if anyone has any information that can help officers investigate this matter, they are asked to report it to Dyfed-Powys Police, quoting reference: DP-20220111-089".