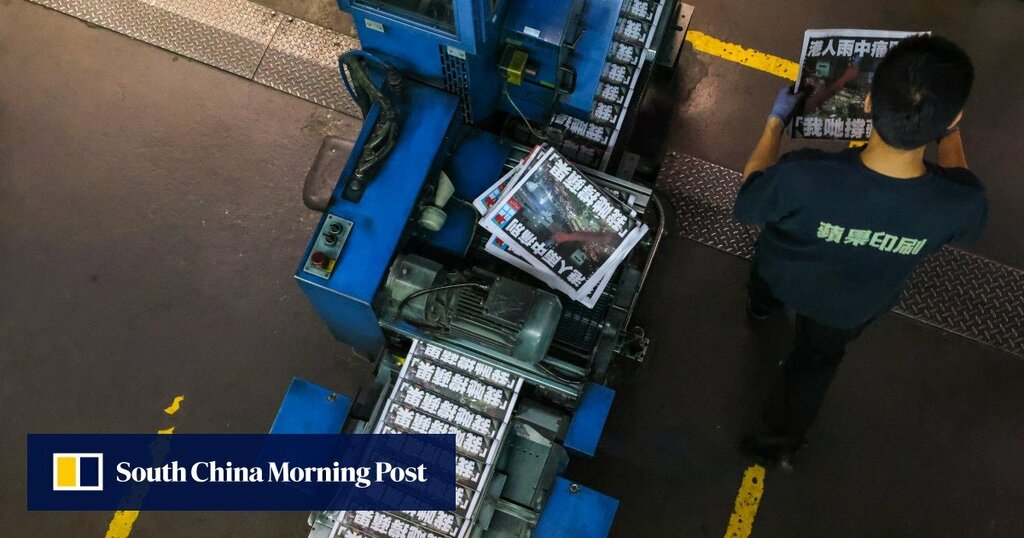 Hong Kong’s security chief has ordered an operations freeze at the Apple Daily printing house in Tseung Kwan O, as a national security investigation continues into Next Digital, the parent company of the now-defunct newspaper founded by jailed tycoon Jimmy Lai Chee-ying.

Chris Tang Ping-keung’s update on the National Security Department investigation on Wednesday followed a court order sought by the landlord of the tabloid-style newspaper’s headquarters to take back the premises.

Tang said he invoked powers under the national security law to order the freezing of operations at Apple Daily Printing, a subsidiary of Next Digital, because the property was an asset linked to crimes committed in breach of the Beijing-imposed legislation.

“With the powers under the implementation rules for Article 43 of the national security law, I ordered the freezing of the company,” Tang said.

In June, three companies related to Apple Daily were charged with collusion with a foreign country and authorities froze HK$18 million (US$2.3 million) of their assets. Days later, the board decided to shut down the newspaper, which printed its last edition on June 24.

Police that month also arrested several senior Apple Daily executives, some of whom have been charged with conspiracy to collude with foreign forces over a series of articles allegedly calling for sanctions on Chinese officials.

Tang on Wednesday would not discuss the case further, only saying: “The defendants have been notified and presented with relevant evidence … As legal proceedings are under way, I cannot talk much further.

“But I believe the public will get to know the details when the court hears the case.”

In a Hong Kong stock exchange filing earlier this month, Next Digital announced its remaining directors would step down, saying the company was forced to cease operations after being targeted by authorities since last year.

The board also called on the government to allow the company’s liquidation so former staff and creditors could be paid.

However, a major hurdle stands in the way of any such liquidation, as Lai, Next Digital’s major shareholder, has been barred by the security minister from exercising his voting rights on the board.

On Wednesday, Lai’s legal counsel asked the High Court to partially lift the restriction so that the tycoon could vote in favour of the company’s dissolution.

Lai’s legal team argued that voting on board meetings did not constitute “dealing with” the frozen properties under the security law’s implementation rules. Government counsel, however, countered that Lai still posed a national security threat behind bars. The court will deliver its ruling on Friday.

Last month, the company offered to vacate its headquarters in the Tseung Kwan O Industrial Estate in response to allegations it had engaged in improper subletting.

It also asked the landlord, the Hong Kong Science and Technology Parks Corporation, to indicate by Friday whether it would accept the surrender notice.

“And if so accepted, the lessor and lessee may enter into negotiation on the consideration payable under the lease,” Next Digital said in a filing at the time.

On Tuesday, the Hong Kong Science and Technology Parks Corporation filed a writ to the High Court asking judges to rule that Apple Daily Printing violated its lease and that it should surrender the premises.

In the writ, the corporation also sought a ruling that the company’s notice of surrender last month was “of no effect”.

It also asked the court to order Apple Daily Printing to pay an “additional premium as provided for under … the lease for a sum of HK$13,575 per day for the period from the date of notice of breach to the actual date on which such breach(es) shall have been completely remedied”, in addition to “damages, mesne profits, occupation rent, and a restitutionary sum to be assessed”.

Hong Kong authorities hit back at Next Digital, say it is shifting blame

In June, the corporation announced it would recover the land occupied by Apple Daily Printing in accordance with the lease. The “re-entry process” was initiated, it said at the time, because of “the breaches of the lease conditions” in relation to the operations of the printing company.

It did not specify what those violations were.

Lai and two senior executives from Next Digital were charged last December with fraud and accused of improperly subleasing office space at the paper’s headquarters to secretarial firm Dico Consultants between 2016 and 2020.

Doing so would have violated the terms of a 1999 land lease by the corporation, enabling Dico to evade land premiums and Next Digital to earn rent from Dico.

The case has gone to court and was expected to be heard next March.

Lai faces multiple charges related to the national security law. He is currently serving sentences on unrelated convictions related to his role in illegal protests in 2019.