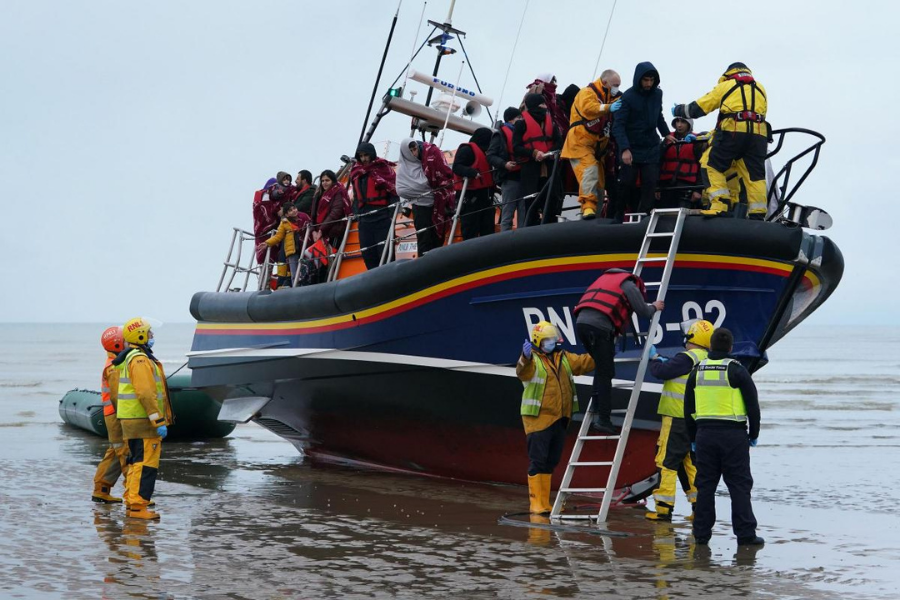 Daily Mirror
Ukraine refugees who enter UK via Ireland may be sent to Rwanda, MPs told

The Guardian - AU
Read news from The Economist, FT, Bloomberg and more, with one subscription
Learn More
Jets coach Ash Wilson keen to strengthen A-League Women's side in all areas

Newcastle Herald
From analysis to good news, read the world’s best news in one place
Australians woke up to Scott Morrison and didn’t just move the goalposts – they dragged them off the paddock

A Home Office minister was unable to point to any calculations that the Government’s Rwanda relocation policy will reduce the number of people arriving in the UK via small boats.

Tom Pursglove, minister for justice and tackling illegal migration, told MPs it was “logical” that by striking at the business model of people traffickers, the amount of people crossing the Channel would decline.

When asked by the Home Affairs Committee what modelling was used to give the “evidence base for this decision”, the minister replied: “This is a new and untested policy at this point in time.

“I do think that in the fullness of time we will see this policy, as part of a wider package that we are introducing, really shift the dynamic.

“What is absolutely clear is we cannot continue with the status quo.”

Meanwhile charities the British Red Cross and the Refugee Council warned they were hearing accounts of some asylum seekers in Britain going into hiding because they fear being sent to Rwanda, as well as deciding not to claim health support amid concerns the NHS could pass their details to the Home Office.

The scheme announced last month by Home Secretary Priti Patel will see the UK pay for asylum seekers who are deemed to have arrived on its shores “illegally” to be sent to Rwanda, where their claims will be processed.

If successful, they will be granted asylum or given refugee status in the country.

Dan Hobbs, director of asylum, protection and enforcement at the Home Office, pointed to a similar policy being utilised successfully by Australia.

He told the committee on Wednesday: “We did look at where other countries have done this.

“Australia, as part of their wider package of their sovereign borders programme, did it.

“They have had no illegal maritime crossings since 2014, so there is evidence out there.”

Pressed on whether his answer meant there was UK Government modelling the committee could read, Mr Hobbs replied: “No, you can do some assumption modelling as part of evidence and to assess numbers.

Stepping in, Mr Pursglove added: “I think it is only logical to assert that if you cut off the business model of these evil criminal gangs, then that will materially make a difference in terms of people making these crossings.”

Told by chair Dame Diana Johnson that it sounded like modelling had not been carried out, Mr Pursglove replied: “I would be delighted to hear an alternative.”

He said the cost of processing people to be sent to Rwanda would be “akin” to the current case rate of £12,000 per individual in the UK.

Mr Pursglove has previously said he expects the scheme to save Britain money in the longer term, with the UK currently spending £5 million per day on domestic asylum accommodation.

During the session, the joint Home Office and Ministry of Justice minister was challenged on human rights concerns surrounding the move to stem the number of unlawful entrants into the UK.

The SNP’s Joanna Cherry, who was attending the session as a guest from the Joint Committee on Human Rights, asked Mr Pursglove if he accepted reports by the US State Department, Amnesty International and Human Rights Watch documenting “unlawful or arbitrary killings”, along with forced disappearances and torture by the Rwandan government.

Mr Pursglove said that “overall Rwanda is a safe and secure country” to use for resettlement, arguing that there were “no systematic breaches” of human rights obligations in the east African country.

Ms Cherry QC pressed the minister about Foreign Office travel advice for Rwanda, which states that individuals can “experience discrimination and abuse, including from local authorities” and that there are “no specific anti-discrimination laws that protect LGBT individuals”.

In response, Mr Pursglove said there “is an anti-discrimination law that runs through the constitution of Rwanda like a stick of rock”.

He stressed that decisions to relocate people to Kigali would be taken on a “case by case basis” to ensure it was safe and appropriate for them to be sent there, with legal advice to be made available during the process.

Lone child migrants who have arrived in the UK will be exempt from the policy, the Home Office has already confirmed.

Officials this week were unable to say when exactly removals could begin and how many people the Government is initially seeking to deport, with Mr Pursglove saying only that the scheme was “uncapped”.

Daily Mirror
Ukraine refugees who enter UK via Ireland may be sent to Rwanda, MPs told