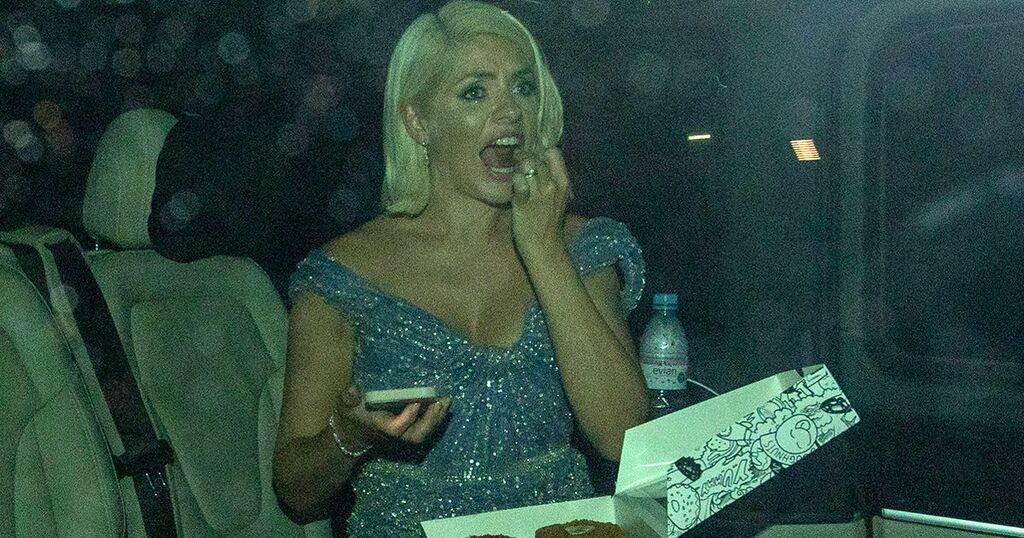 The presenter was seen dining on the sweet treats in the back of a car as she headed away from the London venue, where her and her co-host Phillip Schofield picked up This Morning's award for Best Daytime Show.

Holly was still wearing her stunning floor length gown but there was a bag alongside her with trainers and comfy clothes in.

Holly and her friend had a bottle of gin with them too as they sped off home after attending one of the National Television Awards after parties.

The pair left the party around midnight, but the celebrations continued for her co-host Phillip, who was out at a boozy after party until two in the morning.

Meanwhile, Phillip confessed he was having "another round" as he enjoyed a drink in the company of his NTA award.

In their acceptance speech, Phillip thanked the whole team who worked on the show.

"We are always massively, massively proud of This Morning and our family and our team," he said while holding the gong.

He explained how the team had wanted to be "everyone's comfort blankets" and a slice of normality, despite the coronavirus pandemic.

"What was amazing for us was, every single day, because of the brilliance of ITV, we could stay on air and we could be there. We felt like we were everyone's comfort blankets, but for all of us, you were our comfort blankets too.

Holly then took over the microphone, where she insisted her and her presenting partner were "just one cog in the wheel".

"This Morning is an incredible team, and we are lucky to just be one cog in the wheel," she added.

"We just wanted to give you a normal morning, thank you for voting, it means the absolute world."

Holly and Phil recently returned to the This Morning sofa after their summer break and they were both thrilled to be back, and she even treated fans to a tap dance as she made her on screen returned.

"It's so good to be back," beamed Holly as she greeted viewers tuned in to the ITV show.

However, she was less than impressed with the good September weather.

She added: "As you can see the sun we've been waiting on all summer has decided to come back the day we go back to work."

Fans were equally thrilled to see them back.

"Daytime television just wouldn't the same without Holly & Phil on #ThisMorning and i'm just so happy to see the duo back on our screens!" one wrote on Twitter at the time.