Holi Festival 2022: How the thwarting of a Hindu demon king led to the colourful celebration

Holi, a traditional Hindu festival which celebrates the beginning of spring as well as the triumph of good over evil, is set to take place on March 18.

Although the festival originated in India and is still widely celebrated there as a religious event, it has now been adopted in many places across the world.

Here is everything you need to know about the festival, from where it came from to why the powder, known as gulal, is thrown.

Every year the festival take place over two days, beginning around the time of the full moon that comes in 'Phalguna' (between the end of February and the middle of March). This year, the Holi Festival takes place on Friday March 18, the same day the Worm Moon will grace our skies.

The first evening is known as Holika Dahan, or Chhoti Holi. Festival-goers traditionally gather around a bonfire to celebrate the victory of good over evil. They perform religious rituals, which include prayers that any evil inside of them is destroyed.

The following day is called Holi, or Rangwali Holi. This is when the famous colourful powders are thrown, mixing with water from water guns and water balloons so that the powder sticks to people.

What is the story behind Holi?

Holi's different celebrations come from various Hindu legends, although one is widely believed to be the most likely origin.

In it, the celebration's name refers to Holika, the sister of the Hindu demon king Hiranyakashipu. The demon king was granted immortality with five powers:

When his immortality turned him evil and he began to kill anyone who disobeyed him, his son, Prahlad, decided to kill him. When the king found out, he asked his sister Holika for help; in their plan she would wear a cloak which stopped her from being harmed by fire and take Prahlad into a bonfire with her.

However, the cloak flew from Holika's shoulders while she was in the fire and covered Prahlad; he was protected but she burnt to death.

In the legend, the Lord Vishnu then appeared to kill Hiranyakashipu by side-stepping his five powers.

He took the form of Narasimha, who was half-human and half-lion; he met him on a doorstep, which is neither indoors nor outdoors; he appeared at dusk, which is neither daylight nor dusk; he placed his father on his lap, which is neither land, water nor air; and he attacked him with his lion claws, which are neither projectile nor handheld weapons.

The other most popular origin of the festival is the legend of Krishna. The Hindu deity, embarrassed by his dark blue skin, told his mother he was worried his love Radha would not accept him. She told him to colour Radha's face whatever colour he wanted; when he did, they became a couple.

What is gulal powder and why is it thrown in the air?

The coloured powder - or gulal - is thrown on the second day of the festival and comes from the legend of Krishna. Anyone at Holi is fair game to be covered in the perfumed powder as a celebration of Krishna and Radha's love, regardless of age or social status. The powder also signifies the coming of spring and all the new colours it brings to nature.

Historically, the gulal was made of turmeric, paste and flower extracts, but today synthetic versions are largely used.

The four main powder colours are used to represent different things. Red reflects love and fertility, blue is the colour of Krishna, yellow is the colour of turmeric and green symbolises spring and new beginnings.

What to cook this Holi Festival

A delicious side dish for a Holi Festival feast. Soft, scrumptious naan - with no oven required!

This comforting and quick Indian supper made with warming spices and tender sautéed pumpkin is perfect for a Holi Festival-inspired option.

These crispy onion bhajis will be the best appetiser.

This article has been updated with the latest advice for Holi Festival 2022. 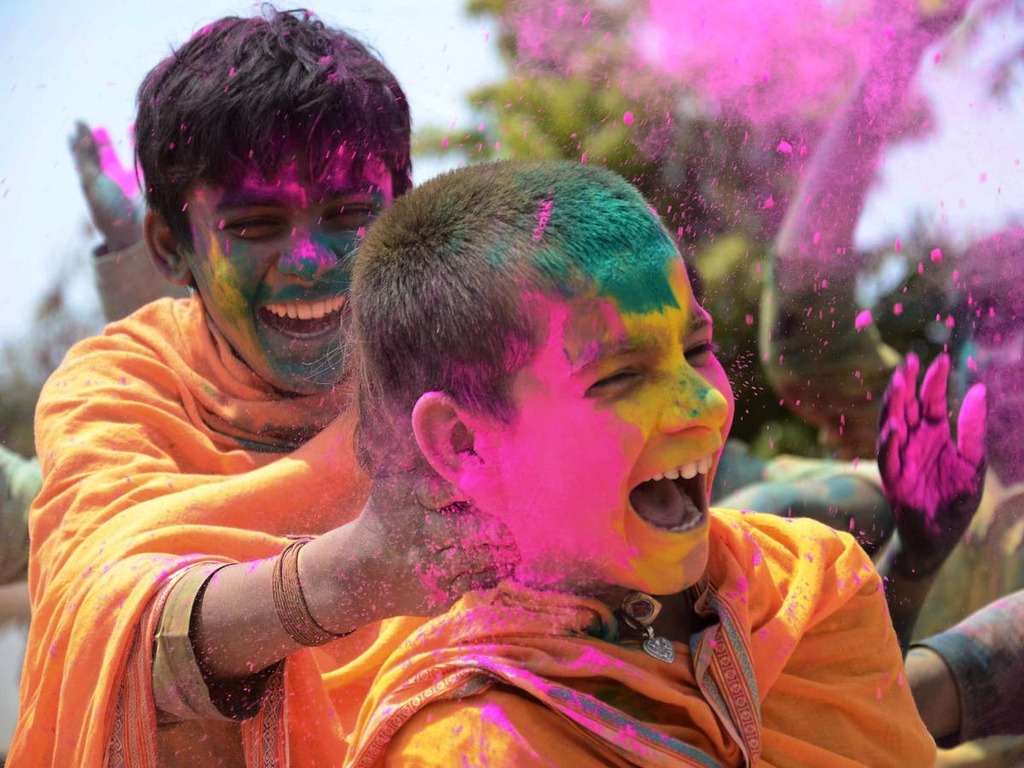 Holi 2022: When is the Hindu festival of colours and how is it celebrated?
The origins of the festival can be found in various legends in Hindu mythology

Holi 2022: Holi has many names, and is celebrated differently across parts of India. However, the festivities and enthusiasm remain…