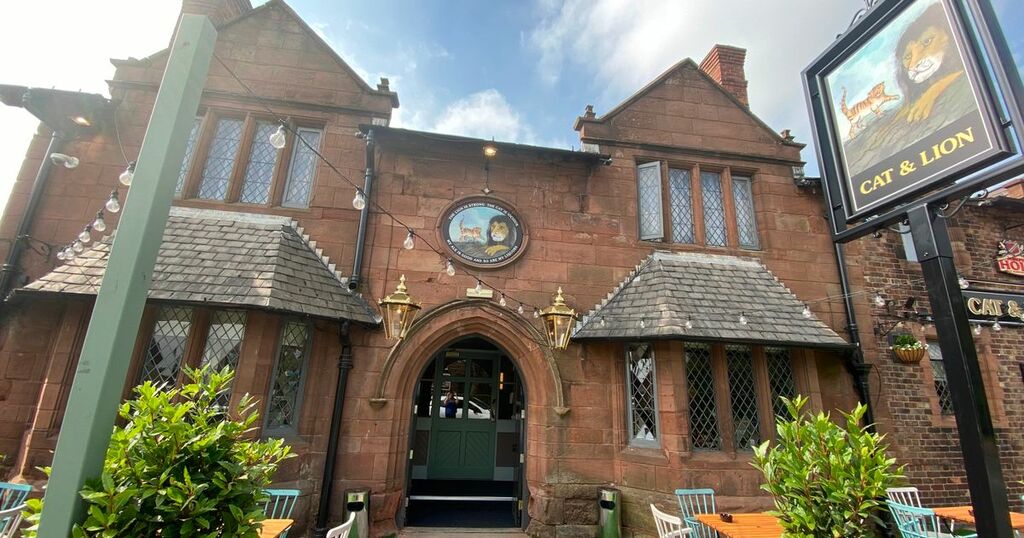 Nestled in the tiny village of Stretton, a former 17th century coaching inn has been given a new lease of life by Manchester brewery Joseph Holt.

The historic Cat and Lion pub, just a mile off the M56 in Cheshire, has been given a £600,000 makeover which was unveiled by brewery bosses for the first time this week.

Quirky features of the pub have been restored - including the impressive timber beams, the original wooden bar and an old hay barn door from its original incarnation as a coaching inn on the main A49 through Warrington.

READ MORE : Bundobust's second Manchester restaurant - with a brewery inside - is about to open

The independent family-run brewery acquired the pub in 2019, however the opening was delayed due to the pandemic in early 2020.

But now after an extensive refurbishment, including eclectic new interiors throughout the pub and new outdoor seating, it has reopened with a full range of the brewery's ales and lagers and a new food menu.

One of the oldest buildings in the village of Stretton, it played a key role as the centre of village life over previous centuries for farm sales, meeting places, and as a repository of the draft Apportionment of Tithes in 1846.

The brewery commissioned the work of rising artist Katie Grenville to honour people and places synonymous with the local area.

That includes a mural of a WW2 fighter plane and HMS Blackcap honouring Stretton airfield, and the crest and motto from the Lyons family, who owned and operated the pub for many years.

Indeed it is believed the pub's name was originally a play on the name of the Lyons family.

Brewery bosses have commissioned a new painting of the original Cat and Lion sign for the pub - which bears the original slogan: "The lion is strong, the cat is vicious - my ale is good and so is my liquor".

The Cat and Lion marks the fourth Joseph Holt pub in the Warrington area, alongside the Cock O'Budworth in Great Budworth and the Millhouse and the Stonemill.

Richard Kershaw, Chief Executive and fifth generation of Joseph Holt said the acquisition of the Cat and Lion would be a boost not only for the local community but for the region too.

He said: “I’m absolutely delighted about the rebirth of the Cat and Lion.

"Not only as a celebration of its wonderful history but as a reflection of our continued ambition for the brewery and the North West economy.”

The coaching inn became a pub in 1800 - and the original bar with intricate wooden carvings remains at the heart of the refurbishment.

The food menu is filled with Holt's pub grub favourites like fish and chips, steaks, pies, and hanging kebabs.

While it is also one of only five Holt's pubs to have a pizza oven in the kitchen with a full menu that even includes a BREAKFAST pizza complete with Bury black pudding, egg and bacon.

Paul Longmire, Marketing Manager at Joseph Holt added: “We are thrilled to bring yet another Joseph Holt pub to the customers and residents of Stretton and the wider Warrington community.

"Our vision for the Cat and Lion is to make it a central part of the community again.

"A place where drinkers can enjoy a relaxed pint with friends, where families can meet for food and where everyone is welcomed with the famous Joseph Holt hospitality.”

The opening follows hot on the heels of Holt's revamp of one of Manchester's oldest pubs, the Lower Turks Head on Shude Hill, which was saved from closure by the brewery and reopened to the public in July.

The Cat and Lion, Tarporley Road, Stretton, WA4 4NB is open daily 12noon to 11pm and on Sundays 'til 10pm